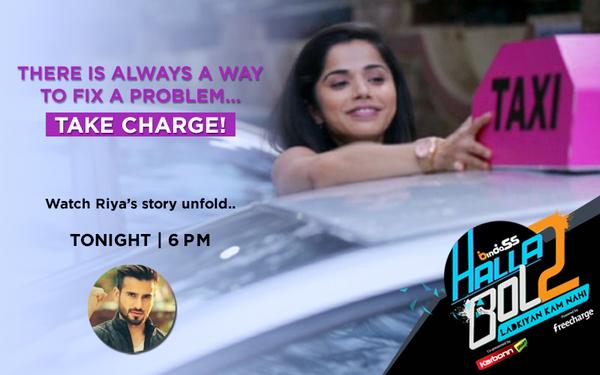 Karan Tacker (the host) speaks that girls travelling in late nights are still prey to criminals and are easy target. We cannot ensure the safefy of girls even there are security arrangements in place. Riya starts a taxi service and people have challenged her idea since her own life was at risk.

The story is set in New Delhi and it starts with Riya and her friend Neha coming out of a party late in night. Neha is drunk and assisted by Riya in taking a taxi. Next morning, Riya greets her father and speaks of getting late as Neha was not willing to leave the party scene. Soon, she finds on the news that Neha might have faced abuse and rape last night by the taxi driver which was supposed to drop her home. She gets anxious and calls Neha. Neha picks the call and speaks of going to wake and then looks at the news upon Riya’s insistence and learns about the news about a girl’s rape and people’s protest at India Gate. Later, Riya meets Neha at some cafeteria and a man blames the rape victim as she was drunk late night at 2:00 AM. Neha confronts the man and then speaks to Riya of depending on public transport unlike her who has own car. Riya agrees with Neha’s point that she is fine as she owns a car. She then suggests what about girl and woman of the city get a car and dependable driver. Moreover, talks about pick and drop service at night she is envisioning. Neha thinks the cab driver can attempt rape. Riya then suggests that drivers will be women but Neha asks whether her father is going to fund the service. Riya doesn’t want to tell her father and suggests people don’t start social sites by informing their parents.

Later, Riya meets Neha another time and speaks of having her own car and will create a social networking page to find women drivers and thinks her plan will work. They begin to get calls from women. Neha meets many women and learns that some know driving while others are not so well equipped in driving. Riya puts the taxi marker on her car and thinks herself as genius. She is also worried since 5 days they haven’t received a call and wants to change their marketing strategy. She goes to meet a business woman and inform about her taxi service – Pink Power taxi service and also other companies. She puts forward her business plan and during one of her meetings a man makes a taunt asking whether woman knows driving. Riya chooses Naina as the first driver of their car service. Later, in the night she gets a call from a woman customer and provides her the details of Naina. Riya goes home after getting a call from her father. He asks about her car and she replies of dropping it at Neha’s home as petrol was less. She goes to bed and soon gets a call from the woman customer that the driver hasn’t reached her and is bit angry. Riya calls Naina and learns she is afraid to go out since her parents are not allowing. She then decides to drive herself and provides the service to her customer. Soon, she finds two men teasing her and approaching towards her car. She drives fast to evade them while the woman passenger gets worried. She manages to escape from them and her passenger gets glad to see Riya’s valiant and mindful efforts. Next morning, Neha thinks they need to hire a woman driver and Riya speaks of feeling much risky after seeing how she was chased by some men and undertands why they are not getting clients.

Neha is glad to see Riya being fine after that incident and Riya speaks of not taking break and it will not deter her commitment. Neha gives her a pepper spray when she meets another incident like former. Riya gets another client and speaks to Neha on not moving back. She drops the passenger in the night and comes back home. Next morning, she feels happy as her cab service portal is online and getting more client requests.She takes a young couple as the passenger and Vicky the man is trying to force on his girlfriend. The girl was drunk and Riya tells him to behave but he doesn’t listen. Soon, he tries to force on the girl and Riya stops the car and asks Vicky to leave the car but he threatens her. As he didn’t stop his actions, Riya uses Pepper pray to evict him from her car and leaves with the girl. She comes back home and her father asks about her whereabouts. She cites on being late due to project work. He asks why she is lying and speaks of seeing on her laptop about Pink Power taxi. He suggests whether she knows on what can happen to her and she replies of going to hire women taxi drivers but she didn’t got. He speaks that girls didn’t come forward to work as they know the city is not safe for women. He gives her ultimatum and suggests she needs to come back to home by 9:30 PM and doesn’t listen to her. He thinks she will understand him some day. She speaks of rescuing a girl that night whose BF was forcing on her. She gave a helping hand to her and there are many girls like her who feels unsafe in the city. Her father thinks what she is saying looks good in announcements and lecture and suggests she can know what the victims and their parents feel.

Karan (the host) speaks that our thinking is just very small as we know its not our girls. Karan appeals that every girl is someone’s daughter, wife, and daughter-in law. If we see them and move other way is actually shows our coward nature.

Neha comes to meet Riya. Riya speaks that her father is right to have worries and doesn’t know what to do next. Neha doesn’t want to break the partnership. Riya gets a call from a customer and she thinks of going home before 9:30 PM before dropping the passenger. She is going with her passenger – Pooja and the same man Vicky comes to confront her when she had stopped her car. He throws away the pepper spray and threatens to do grave things with her and the client. He tries to apply force on the Pooja and Riya tries to stop him. Soon, Riya gets hit by another man who breaks a glass on her head. She falls down on the road and starts bleeding. Vicky runs away from there. Riya gets admitted in the hospital and Neha comes to see her. She gets back to her consciousness and her client Pooja comes there too. Pooja speaks of calling to her father as she knew that the men were dangerous and has called her father who is in police. After finding police coming, Vicky and his friend ran away. Pooja’s father a policeman comes there and thanks Riya for saving her daughter and even the commissioner spoke that Riya’s Taxi service is very essential for the city.

Riya’s dad thanks him but suggests that she will not drive the taxi as her life and secure future is his responsibility. He will invest money and she is going to head Pink Power Taxi. She gets glad with the surprise and to win her father’s support. Riya’s company comes to the fore and she speaks to her staff and members on having 50 cars and 100 drivers and got police support and self-defense training [halla bol tune plays] and have dropped 1000 woman with their cab service. She hopes a day would come when all the women in the city go out without any fear and worry. But until that day they need to keep continuing their work. She cuts a cake and celebrates with her father and staff. He speaks of being proud of her and suggests Riya is equivalent to 100 boys.

Karan speaks that Riya has all amenities that takes care of her safety but nonetheless she has started a car service for the women and by the women. The answer is Riya understood that not everyone is lucky like her and knows that there are girls in the city who are prone to dangers and even luck is not on their side. Karan salutes the girls who drive their taxis to provide service to girls and women and drop them safely to their destination. Moreover, Karan talks about Bindass’s new show Zindagi Wins which started on 21st February 2015 and telecast every Saturday @ 7 PM. He signs off by asking the girls to have dreams and to not be quiet since they are not lesser than anyone [Ladkiyan Kam Nahi in hindi].