Meenakshi’s lie is caught by Sandhya. She was speaking about Emily with someone on phone and Sandhya comes to ask her but she starts crying and shouts at Sandhya for not trusting her. She is then threatened indirectly by Sandhya after learning her role in Emily’s disappearance. Sandhya speaks about laws and can frame Meenakshi. Meenakshi has to reveal the truth now. Emily meets with an accident and her lie to family to pursue the beautician course and stating about her regretful and repenting towards Bhabho, gets a big cause for her grief. After the leap of 6 yrs, Emily wakes up in coma.

Ashok becomes Raman’s boss after a long wait. Raman gets the job via placement agency and does not know they applied for his post in Ashok’s company too. Raman hides this job matter from Ishita and feels guilty to lie to her that he got the job in a good company. The viewers will be seeing the ‘Tashan’ between the two, and how Raman works under Ashok being humiliated just for the sake of managing expenses for Rinki’s marriage. With Nikhil being a bad guy and Shagun hiding his truth to make Ishita fall in everyone’s eyes, the twist will come with Bhalla family kicking out Nikhil and fixing Mihir in frame with Rinki.

The Special Episode on 2nd March will be focusing on Holi Celebrations, and this will mark the truth revelation of fake Roli being a Naagin, while she eyes to harm Simar. Minty gets unhappy with Anushka and plans to harm her, and the episode will show how the two leads get saved from the vamps. Watch out the two stories merging and how Holi function bring the major twist in the show. Anushka and Simar will face the fate, oblivious of the unseen danger.

Roshni meets Yash’s family but she is not so happy with the engagement. She completes the engagement under compulsion and thinks of moving on from Sid but she loves him. Yash had earlier shared his feelings to accept her and Roshni’s mom DD wants her to get married with Yash. Yash puts finger on Roshni’s right hand. Sid has also promised to get back Roshni in one month. Yash comes in between Sid and Roshni. She sits upset alone and Sid wants to celebrate Holi with her. Yash makes Sid go away and hangs around Roshni. Roshni imagines Sid and plays Holi with him in her dream sequence.

Naitik and Akshara have more work. Naitik takes care of the responsibility of Naksh while Akshara takes care of Naira. They are unable to get time with kids. The couple celebrates love yet again as they don’t leave any chance for romance. Naitik and Akshara attend a puja with their families, and after the puja, Naman suggests couple dance on Holi function. With Naira’s presence and Muskaan’s marriage, lot of new things are happening and celebrations are definitely on in the show. Naitik and Akshara go on a surprise date, as they were annoyed with each other on the matter of managing kids.

Abhi comes in the disguise while covering a blanket to rescue Pragya. She gets shocked and couldn’t realize he came there. He doesn’t know on he would get fine from goons. She feels safe and fine and showers a hug to him. He first puts the bangle on her hands and also wants to read a valentine letter for her but she stops him. They begin to have their Nok Jhok and he asks whether she has hypnotized those people. Abhi gets caught by the goons and beats corporator a lot. Abhi has to save himself from the goons in the coming track. Abhi jumps with Pragya from much height. The corporator aims the gun at them to shoot, and the couple gets a safe landing.

Zee Tv’s Holi Special will include the cast of Qubool Hai too along with other shows. Aahil and Sanam celebrate the holi and have sweet romance amidst everyone. In the track ahead, Aahil will come to know about his father being alive and the secret of the doll factory.

Soumya’s suicide drama is next in the show. She spots Yuvraaj standing in the lawn and intentionally stands on the railing to show her suicide attempt. Yuvraaj runs to save Soumya and being shocked in her move, he pacifies her saying he is always with her. Suhani witnesses this moment of them holding hands and sharing a smile, and gets teary eyed knowing Soumya is getting close to Yuvraaj. It has to be seen how Suhani reacts when Sharad breaks out the truth to her, will she again stick to her one sided friendship or one sided love? Tough choice for Suhani!! Just hope Yuvraaj gets some sense and do anything to make Soumya go away from their lives.

Vihaan and Aarushi are dancing with much fervor during their Sangeet ceremony. They are sharing intense eyelock and having romance. Vihaan also danced with two of his moms. There is also a twist with Girish’s theft comes to the fore but Vihaan manages to calm down the matter and spoke of giving the watch as the gift. Prahlad gets beaten by Aarushi’s grandpa at home. How Vihaan and Aarushi understand each other and their families in such difficulty?

The story has taken the leap again in the show to drive the story ahead. Jigar and Paridhi has become modern parents of Tolu and Molu. Gopi releases from the jail after 10 years but haven’t forgotten the prayers and Aarti, traditions and continues to be devoted. She prays and remembered her Lord by drawing sketches in the jail. Meera was caught in drunk and drive case and is arrested and taken to the jail. Gopi comes to Modi house, and Tolu Molu touch her feet and greet her. She gets touched by their love and blesses them. Gopi looks at Meera but she is oblivious of her identity. Gopi meets her family and they all welcome her with a warm heart as she has served her jail term for the crime which was a righteous deed for them, to end the evil Radha being in Lord Durga Maa avatar. Gopi has many things to reveal, as Ahem has left the home and Kokila and Rashi is not living with Modi family.

Ahilya yells on Astha seeing her in Kavita’s room, and warns her not to be close to Kavita again. Astha agrees and leaves, while Ahilya worries to keep Kavita hidden from everyone’s eyes. Astha goes to meet Kavita again and urges her to talk to her once, and answer her. Kavita’s link to Niranjan comes in Astha’s sight, and she tries finding out more about the relation between Agnihotris and Sarkars. With Indrajeet falling for Astha/Sapna, how far will Astha go to get back her family’s respect and rights back?

With many evil plans by Bansuri, Veera fails to deposit the judicial documents of Baldev in the court and upsets Baldev. Bansuri shows her fake hand injury and tries to make Veera do all household work, and Veera plans to expose her by taking her to doctor. The fake story turns real and Bansuri really gets a fracture. Veera starts taking good care of her as an ideal bahu and slowly gets in Bansuri’s good books. Baldev notices Veera selflessly taking care of his mum, knowing he will give divorce in few days. Bansuri’s relative comes to stay with them, and the drift between Veera and Bansuri starts ending, leading to positivity in Baldev’s heart. Ranvi comes to know about Gunjan’s pregnancy and gets glad. He takes good care of Gunjan, showing total concern and Gunjan feels right about her decision to keep the baby.

Ranveer succeeds in tricking Amba while Ritika does the same with Baa in sending them off for some special prayers at a temple. RV thinks he can spend some valuable time with Ishani and plans a special Valentine surprise for her. RV decorates the room with baloons and candles and then goes on to confess his endearing love for her. He holds her face to show love and asks whether she wanted to say something. Ishani feels awestruck at that moment but is she going reciprocate her feelings whole-heartedly for him. Though Ishani-RV are coming closer with divorce papers being burnt and some developments – RV’s support to her sister Gauri and Chirag’s GF Shainala getting better but convincing Baa and Amba is still in progress. Will RV succeeds in reuniting Baa and Amba for his love ? 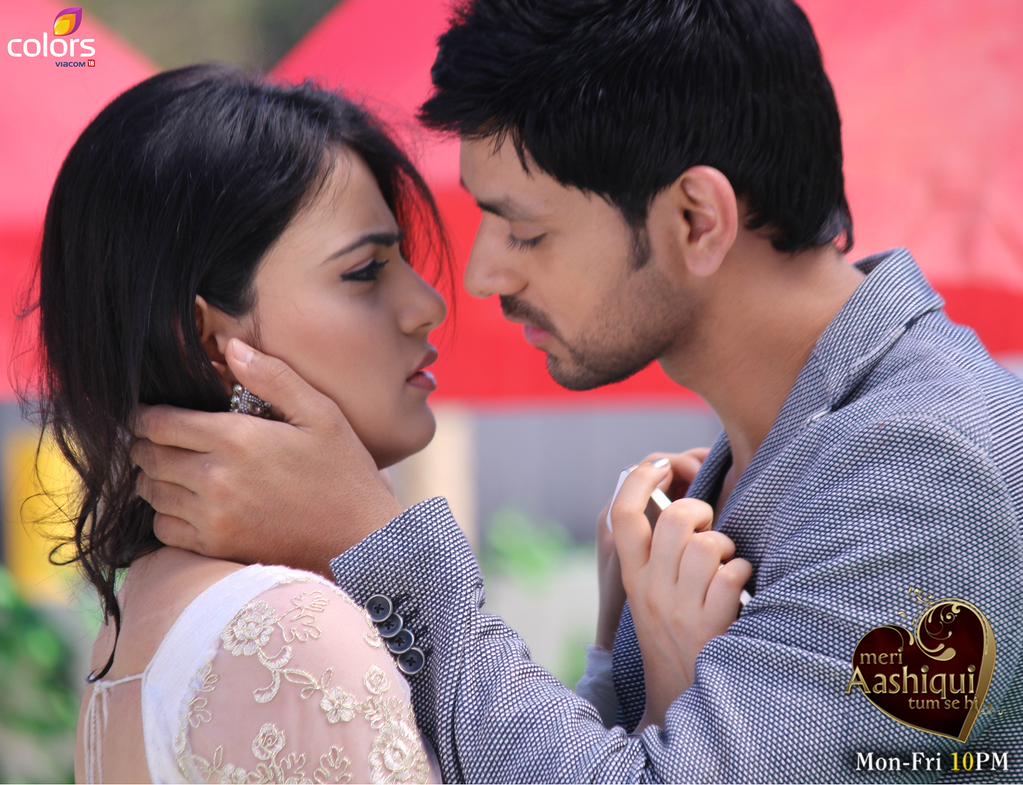 Nisha and Kabir don Rajasthani costumes and acts as husband and wife with her being pregnant as well to reach the kidnappers [Bhabhi & Co]. In their rescue efforts for Chandu, Kabir manages to get the gun and threatens the goon to get her back but in vain. Bhabhi leaves with Chandu and Nisha and Kabir need to put more efforts in rescuing her. Moreover, Kabir reiterates to Nisha on searching a family member and is oblivious of the identity – Viraj. In the track ahead, Nisha and Kabir land themselves in a problem and to fix it get entagled in another problem – Marriage. Nisha is furious with Kabir for bringing her at the place where mass marriages are taking place.  He thinks they can get away from there only after enacting (fake) the marriage and regards it as the solution. Kabir’s antics and carefree attitude annoys Nisha as she takes it much seriously. Will Kabir and Nisha marry each other or are they going to escape it ?