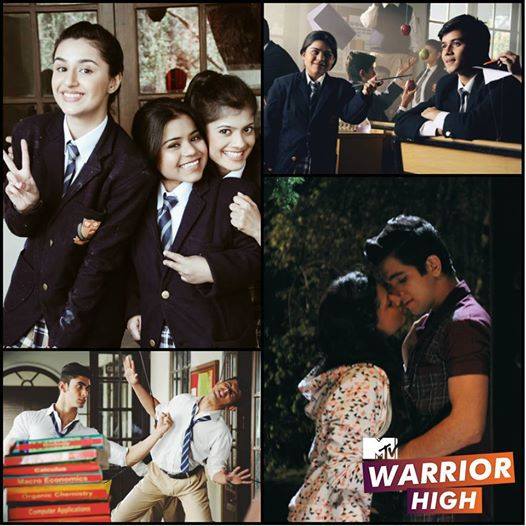 The journey of Niti, Utkarsh and Parth have begun to Warrior High (WH) with their registration complete and are on the way to Dehradun. Siyali has given a big sacrifice for the sake of friendship and concern with Utkarsh and wants to see his secure future. Niti succeeded by her luck favoring in the OCR multiple choice marking. Both Utkarsh and Niti were unprepared for WH scholarship test but their fate gave them the opportunity. Niti’s character is drawn towards liking boys and is eager to meet them in Warrior High while Utkarsh misses Siyali dearly. He is much attached to his frog and calls it as his mother. Niti, Siyali and Utkarsh share emotional bonding since childhood as they grew up in an orphanage. Siyali was yearning to go to Warrior High and continues to be remain so. Eventually, her dreams to study at WH will come true and she doesn’t need to wait for one year. Vibha is the young assistant teacher of Warrior High who organized scholarship tests which was attended by Parth, Siyali, Niti and Utkarsh. She is an ex-alumni of Warrior High and dropout from Bachelor’s degree at Oxford, U.K since her parents were unwell. The school head Anusha have shown confidence in Vibha by giving her the job. Vibha strives to take care of her family by working at Warrior High. She has some inhibitions but is determined to overcome them.

Parth is a school topper but was torn by his family problems. He overcame the roadblocks created by his step-father and listened to his mother dearly in going ahead to study in Warrior High after succeeding in the scholarship test. His mother fought a battle against her husband for his well being and even had to resort to tit-for-tat behavior. Parth continues to keep agressive attitude and when he find things unreasonable he cannot control himself. A glance of his aggressive persona was exhibited when he engages in a fight with couple of boys – senior students inside the train on his way to the school and even pushes Vibha away with defiance. Parth’s attitude would definitely make an impression in others’ mind and a contrasting personality to him is that of Utkarsh. Utkarsh carries a relaxed attitude and doesn’t bother with things. However, his selection is based on Siyali’s big sacrifice via exam sheet name change. Vibha was the one who supervised the test and found Utkarsh leaving the exam hall by returning back an empty answer sheet and without his name. Will Vibha come to know and realize the truth of Utkarsh’s selection ? How Siyali’s entry in Warrior High gets shaped with Utkarsh’s selection truth coming to fore ?

Additionally, Warrior High is in its 2nd week of telecast [Monday-Friday, @ 7 PM on MTV India] offers an emotional ride in its story which is layered while having freshness, thrill and buoyancy.