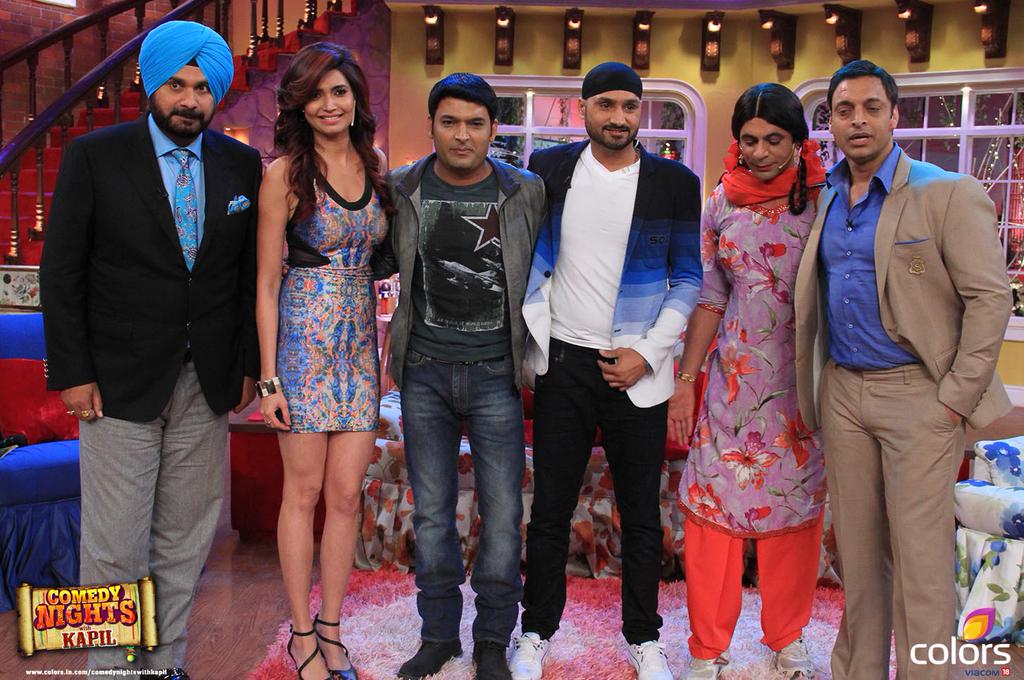 Siddhu starts the show and speaks on how India has defeated Pakistan for the six time in the row and he was referring to the last outing in World Cup 2015. Sooner then, Kapil comes and welcomes Shoaib Akhtar – Rawalpindi Express and Harbhajan Singh – Turbanator.  Harbhajan and Shoaib come on the stage with Bhangra tune. Kapil speaks to Siddhu on inviting Shoaib and Harbhajan together since long time and he was able to realize it since the day has come. He begins to have conversation and starts with Shoaib first. He asks Shoaib why Pakistan loses to India in the world cup always while in one dayers (regular ODIs) that is not the case. Shoaib replies that in world cup the team becomes nervous and also take much pressure from India. Siddhu steps in and speaks of the last loss that Pakistan cricket team faced in the world cup’15 and shares a couplet. Harbhajan also shares a couplet which compliments Siddhu on his laughter, beauty and happiness.

Kapil chats with Harbhajan and Shoaib goes on. Harbhajan shares an anecdote about on-field moments on how he was hit by Shoaib during his bowling at different parts of the body instead of the wicket and bails invoking laughter. Kapil then speaks on having similar english skills that of Pakistan cricket team and suggests on understanding to the extent the team could speak on lighter note bringing smiles. Next, Harbhajan shares an anecdote of how Inzamam got out on both occasions – not stopping the ball and it got hit on the pad;  and stopping the ball when someone throws it. On both occasions, he was declared out by the umpire. Later, at the press conference Inzaman speaks of not understanding why he was out in both cases – stopping and no stopping bringing laughter.  Dadi marks her entry and starts speaking on mobile with a young guy Babblu who is learning cricket and needs a bowling coach. She first informs him that Bhajji is an apt choice. Dadi informs him that she has taught Bhajji the Doosra since he used to get out in the first (pehla). This brings smile on Harbhajan’s face.

Dadi then learns that a fast bowler is needed instead of a spin bowler and then goes ahead to put forward the name of Shoaib and refers to him as Shobu. She then  opens-up to Babblu on how she taught Shoaib in running after taking a wicket. She depicts Shoaib’s standard running scene and repeats it another time. Dadi soon discovers Shoaib there and teases him by calling loafer (Luccha in hindi). She goes on to compliment him in her usual way and even pampers him. Soon, Bittu discovers that Dadi is carrying some personal belongings in a sack and takes it out. He finds a small plastic water vessel and other belongings with her and pulls her leg. Harbhajan signs an autograph on Dadi’s water vessel. She then takes out a long underwear/boxer shorts and suggests it belonging to Inzamam on lighter note. She asks Shoaib to give her the autograph on it quickly since Inzamam can come back at any moment. Shoaib signs on it followed by Bhajji. Dadi keeps her things back in the sack and leaves while riding a bicycle.

During the show, Harbhajan have some fun banter and speaks on how selfies are getting known in his town in Punjab. Shoaib is not behind and shares a joke on moisture vs. moisturizer in the context of commentary. There are also fun moments from Gutthi who will show her antics and signature singing and dance moves. Before signing off, Kapil wishes the best to India and Pakistan in the current Cricket World Cup 2015 and also speaks on his wish to see India winning. He signs off the show asking viewers to keep smiling and watching his show. The show ends with Dadi giving few more kisses to Shoaib and everyone greeting each other.