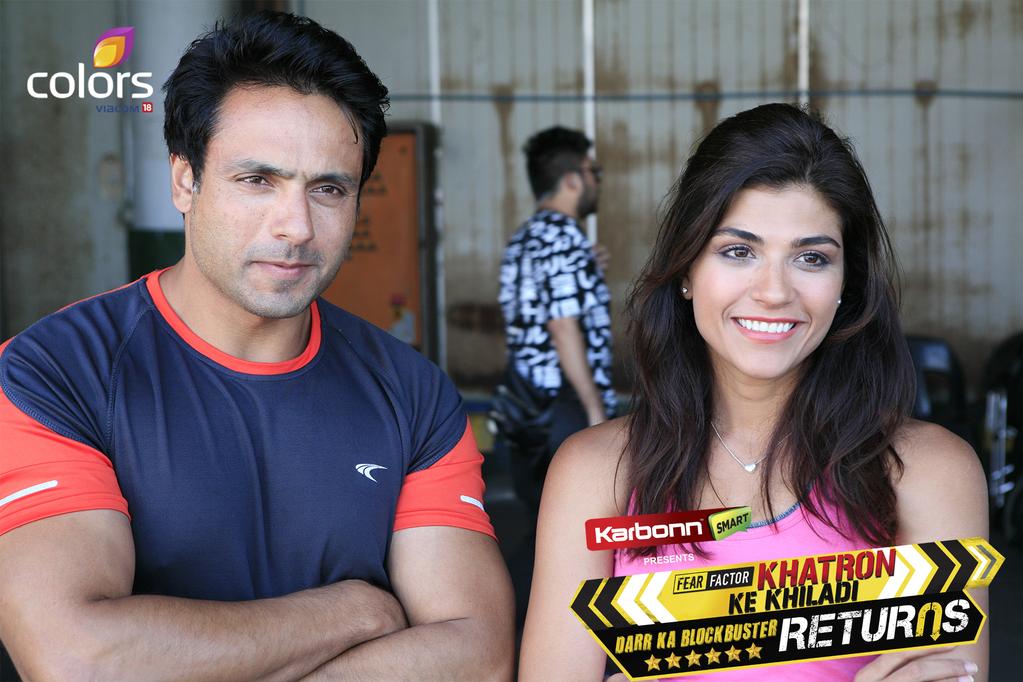 Rohit Shetty (the host, mentor) welcomes all Khiladis and speaks about the couple special week and how their friendship was tested yesterday. Rohit informs that if any one of the contestants commit a mistake in today’s stunts then both of them will go into elimination round.

1st STUNT: Mein Toap Mein Teja Boat Mein [I am in Cannon while Teja is in Boat], Location: FPT Harbour

The contestants needs to hang on to a platform tied to a truck. They need to jump in the water close to the buoy and will find a flare stick which needs to be taken. Next, they need to swim to reach the float/raft and climb it and use the flare stick to burn the rope. Once the rope gets burnt, it will trigger the cannon.  The other partner will be inside the cannon and once it gets ignited the contestant will be thrown from it into water. After swimming, he/she need to swim to reach the boat and release Teja [Actor, stunt helper] by unlocking his handcuffs to complete the stunt.

* Archana and Iqbal
Archana hopes to succeed in the stunt. Iqbal starts the first leg of the stunt while she stays inside the cannon to work on the 2nd leg of the stunt. Iqbal hangs to the platform and his body shakes and soon jumps farther from the buoy which requires him to swim for some time to reach at the flare stick. He picks it up and swims to reach the float but is unable to climb on the raft/float for some considerable time. He puts much efforts and energy and finally manages to climb. He uses the flare stick ignite the robe. Archana gets thrown by the cannon after ignition and she manages to dive closer to the boat. She swims to meet Teja at the boat and completes her stunt.  After the stunt, Iqbal speaks of his weight problems that put roadblock during his stunt. Their stunt time clocked 8 minutes 49 seconds.

* Ashish and Meiyang
Ashish starts the stunt and jumps in the water close to the flare stick and swims to take it quickly. He reaches the buoy and quickly climbs it after some efforts. Meiyang is thrown by the cannon and he begins his stunt. He releases Teja quickly after swimming in his style and completes the stunt. After the stunt, Meiyang spoke that technique is important along with strength. Their stunt clocked 2 minutes 49 seconds.

Result: Rohit takes back the danger band from Ashish and Meiyang. Both Archana and Iqbal will face the elimination stunt. Rohit reiterates the contestants on giving the best perfomance since the best performer going to get advantage and he will reveal about it later.

The contestant will be lying down in a water tank and ice will be poured. He/She needs to use the pump so as to remove water out and to make more way for breathing otherwise the water will reach to the top. There is a small gap through which the contestant can come out in completing the stunt. The temperature is 3 degree celsiius and the total stunt time is 4 mins since doctors doesn’t allow for more time. If the contestant feels not comfortable, signals need to be made to stop the stunt.

* Rashami
Nandish speaks about his wife Rashami not comfortable with cold.  Rashami starts her stunt and uses the pump but soon the handle comes out. She puts it back but comes out in few seconds after getting into panic mode. She stayed inside the water+ice glass chamber for 30 seconds.

* Asha
Asha pumps slowly to remove the water. She maintains calmness and speeds up gradually. After a while, she comes out by stopping her stunt. Asha clocked 2minutes 1 second.

* Sana
Sana pumps quickly at the onset and does prayers during the stunt. After some time, she signals to stop her stunt thereby ending it. After the stunt, Ashish speaks of becoming emotional after seeing Sana and Archana feels proud of her. Sana clocked 2 minutes 3 seconds.

Result: Fear Phanda are taken back from Asha and Sana and Rashami going to face elimination stunt.

The contestant needs to keep sitting on the chair for 5 mins and  Rohit informs about straight elimination if he/she doesn’t want to take part. Spiders will be poured on the contestants and also there is a box with 9 small boxes with Tarantulas spiders – big and poisonous ones. The contestant need to take the spiders one by one from the boxes and put them inside the head chamber over their face and head. The stunt time is 5 minutes and 9 spiders need to be taken out and put inside the chamber.  Only one hand should be used when transferring them.

* Iqbal
Iqbal starts the stunt with some spiders poured all over his body. He takes the first tarantulas spider from a box and puts inside the head chamber. He quickly puts few more of them on his hair using one hand and with finesse. He tries to pick another spider but it clings to his hand and the same case for other spiders. Nevertheless, he completes the stunt by putting all the 9 spiders in the chamber. After the stunt, Iqbal speaks to his daughter Amara on being a spider man now. Iqbal speaks of also getting rashes and itchy feeling. He clocked 48 seconds.

* Rashami
She starts quickly and Rohit tries to pacify her. She uses both hands after feeling panic and gets a warning. But soon completes her stunt. She clocked 56 seconds [penalty of 10 second as she got warning]

* Archana
Archana starts her stunt and takes out the spider slowly but takes the remaining ones quickly and completes her stunt. She clocked 58 seconds [10 second penalty as she took two spiders at once during her stunt]

Elimination Result: Archana gets eliminated from the show. Archana cries on leaving the show. Hussain, Riddhi speaks of missing her much.

Rohit motivates Archana by sharing his story of working in the industry since 1991 and it has been 23 years since then. He suggests on finding that she has much courage and spirit which even some boys would not have. He also adds that either you need to have some training or courage to take part in KKK. Archana before leaving speaks of renewed self-confidence plus a boost and calls her journey and participation as a fantastic experience. Rohit signs off from the show with some fun banter with Hussain, Ashish and Meiyang getting some electric shocks with their hand wraps.

Next Week: KKK 6 will present the Insomnia special. The contestants are going to perform the stunt after going through without sleep the previous night. This will test their mental endurance under lack of sleep condition and need to fight it during the stunt. The stunts are performed in pairs – Moving truck with water tank with one contestant inside the water tank while the other walking on the top of the tank;  Car stunt with fire hazard.