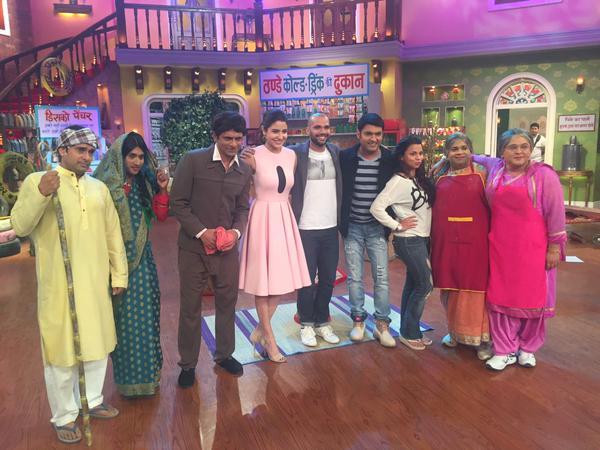 Guest on the show:  Actors and Stars – Anushka Sharma and Neil Bhoopalam, the lead actors of upcoming movie NH10

Kapil starts the show in the role of Inspector Shamsher and talks about people entering places after seeing the Welcome board. But thats not the same case if the police station [PS] puts up a welcome board. Shamsher suggests he needs to go out to find out people to bring them to PS.  Once the people comes to PS, they welcome the inspector always. Next, he shares an anecdote of falling into a well during his trail in following a thief. He gets support from a constable who throws a robe so that he can climb up. But once the constable saw Shamsher’s 2 stars on uniform, he made  a salute which resulted in Shamsher falling down. Another similar incident occured with Shamsher doing the salute to see his superior and as a result losing the robe from his hand. He then talks about finding the lost children in fairs [Melas in hindi] and for the same reason police personnel have their own children late after several years invoking a laughter. Sooner then, Shamsher welcomes Anushka and she shows her warmth by suggesting that she got water in her eyes after seeing him. He gets happy and suggests that since police helps much they deserve a hug. Moreover, compliments her by suggesting she is going to help the law. He introduces himself as Inspector Shamsher but she is not impressed and makes a taunt that even his Banyan is visible. He takes her comment with fun and suggests that in his earlier dress even his innerwear (kaccha) was visible.

Shamsher talks to Anushka about her movies and informs her on seeing Band Baaja Baraat movie. After seeing it, he thought to bring her on his marriage as the bride invoking laughter. Next, Shamsher asks audience if they find Anushka on a highway asking for lift then whether they are going to help her.  An old man from the audience stands to answer but Kapil/Shamsher makes a remark that his car model is old. The old man on a lighter note replies that the engine is new invoking laughter. Later, Kapil comes as himself on the stage and takes the role of Bittu and interviews Anushka. She asks him why there is much difference between them though both are Sharmas bringing smiles. Bittu becomes bit nervous and begins talking on the importance of upbringing. He reminds that she had gone to study at an Army school (Sainik) since her father was in army. However, he has studied in a day school (Dainik) where he used to go on some days while skipping others invoking laughter.

To provide context about Bittu’s wife Mrs. Sharma, Anushka first speaks that behind every successful man there is woman’s hand. She then brings his wife Manju in her discussion. Bittu is not much concerned and suggests that his wife’s hand is small and even she is small. He suggests to Anushka that with her hand and support someone can bring the world cup as well thus pulling her leg on Virat Kohli. That note brought smile on Anushka’s face. In the show, Gutthi shares some nice moments with Anushka. Anushka sings the Gutthi’s signature song – Aap Aaye Is Bagiyan Mein Phool Khile Gulshan Gulshan… and grooves with her. Gutthi add few lines of her own and sings by adding that the batsman stays in the crease and the tension gets release bringing smiles. Bittu enacts the P.K. movie scene and informs Anushka of having special powers and thus can foretell about her by just holding her hands. He holds her hand and starts speaking – she was born in childhood; when she was born she was very small bringing laughter. Anushka does the switching and tries to foretell about Bittu. She pulls his leg by asking whether he is getting acidity and soon both smiles on that note.

Kapil aka Bittu welcomes the lead hero of the movie NH 10 – Neil. Neil comes on Chil Gaye Naina.. song and greets Kapil. Since the set-up was that of Dhaba, Anushka asks Bittu about food and he makes some noise. Dadi hears Bittu and marks her entry there. She finds Anushka and greets her fondly and soon finds Neil and goes ahead to kiss on his head. Neil reciprocates his warmth to Dadi by showering few kisses bringing smiles. Dadi informs Anushka on her ability in making non-veg in veg food. She then speaks of a vegetable which once cut there is blood oozing out of it. Bittu reminds Dadi that the vegetable is actually Beetroot and there is no blood.  As Bittu wasn’t impressed with Dadi and thought she will not bring any food, he decided to leave with Anushka & Neil. To give some competition to Dadi, Pankhudi Aunty comes there and wants Dadi to learn cooking from her.  After hearing Pankudi’s remark, Dadi gets angry and confronts Pankhudi. She informs Anushka on how Pankhudi makes Naan Roti by first putting the peda on her umblical cord and breathing to mark the hole on it.

Pankhudi counters Dadi’s sugestions and downplays it by saying it is all false info. She wants to prove herself by preparing the Roti. Soon, Pankhudi aunty and Dadi starts preparing the Roti and compete against each other. Pankhudi finds Dadi preparing Roti nicely so she tears Dadi’s rotis and soon both get engaged in a fight. Dadi takes the upper hand and attacks Pankhudi aunty.. The show ends with Kapil signing off by asking everyone to keep smiling, cleanliness, and keep watching his show. Everyone greet each other with hugs and Anushka and Neil getting much love. Stay tuned to Comedy Nights on Colors.