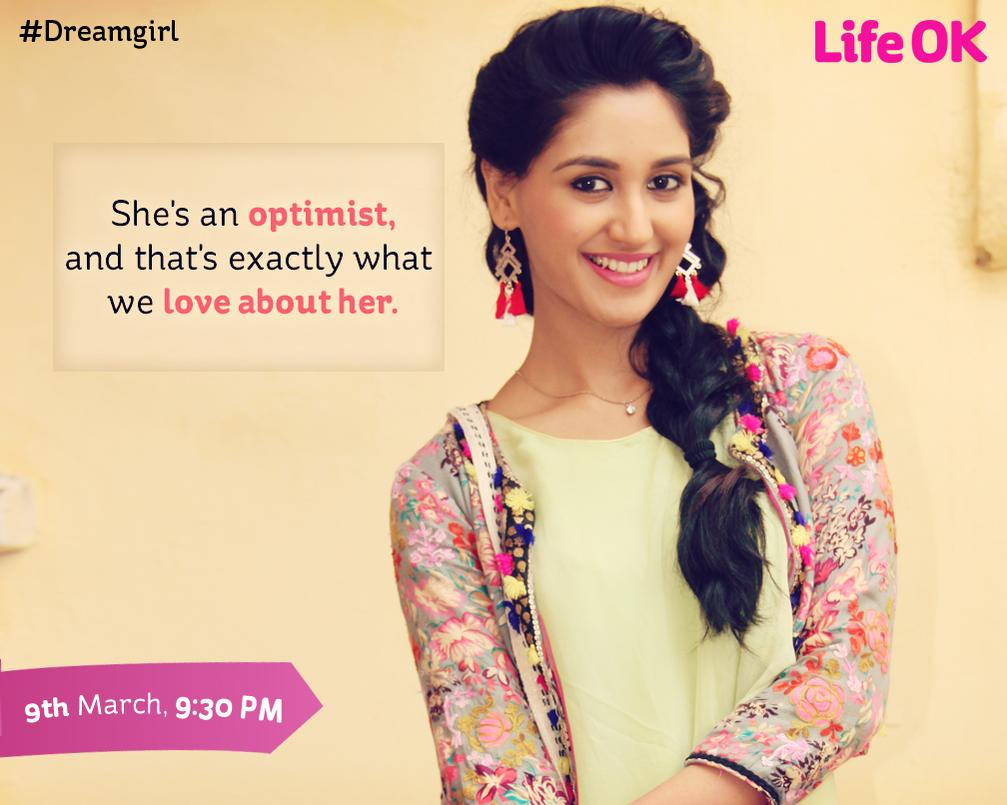 Dreamgirl – Ek Ladki Deewani Si is the new show offering from Life OK. The show presents the story of a girl Laxmi coming from a small town Jodhpur who keeps aspirations to become a Bollywood superstar since her childhood. Her role model is popular actress Ayesha Sareen who has worked for many years in the industry and won numerous accolades. Laxmi as a child was much eager to go to Mumbai and tried different ways to accumulate money for her trip and to realize her dream. Some of those instances – speaking a lie and enacting as blind person to ask people for money for children’s better future. Additionally, taking the spiritual route and climbing a temple of 5000 steps to tie a thread on the tree asking for divine help. Once she gets grown-up, the passion to become an actress and superstar was still intact and she sold off her grandma’s Lehenga (dress) to arrange money for a photo session. But it didn’t came out well and she was bit angry with her friend who spoiled her efforts to develop a portfolio.

Laxmi tried more options such as changing her hair style and even stole the money from her father’s pocket. But still the quest to go to Mumbai seems a distant possibility since even the foreteller didn’t spoke encouraging words. She gets light scolding from her father who also teased her a bit and suggests that her plans to go to Mumbai will not be fruitful and will get opposite to what she is expecting. Nevertheless, she is determined to go to Mumbai at any cost and even took a vow on Ayesha Sareen’s name that she is definitely going to become a superstar. Laxmi is confident and keeps her focus in achieving her dreams and making them happen. Laxmi is going to face many more challenges, obstacles and struggles once she reaches Mumbai but her spirit, optimism and resilience keeps her moving. Dream girl is an inspirational tale of Laxmi’s journey to become a Bollywood superstar with drama and glamour as other essential elements. She is going to meet a Bollywood family (producers) having lineage & fame and her equation with the boy [actor Mohsin Khan] from that family forms an important crux of the story.

Dreamgirl is going to telecast on Life Ok from 9th March  2015 [Monday to Friday] @ 9:30 PM taking the timeslot of Ajeeb Daastan Hai Yeh which ended yesterday.

* Male protagonist opposite Laxmi belonging to affluent family from Bollywood, portrayed by actor and director – Mohsin Khan
– Recent work in Star Plus’s Nisha Aur Uske Cousins in the role of Ritesh, and got known.
– Worked in Bindass Love by Chance Episode 3 in the role of Jignes aired on 14th June 2014. He acted opposite actress Neeta Shetty.
– Follow the tag – Mohsin Khan actor to read articles on his Love by Chance Episode.
– Moshin’s Twitter page

* Dreamgirl is the next season of Life OK’s show Main Lakshmi Tere Aangan Ki [2011-2012]. Shah Rukh Khan [Actor, Superstar] formally introduced the lead pair – Nikita and Mohsin during Life OK’s screen awards this year and spoke about their characters and briefly on the plot.