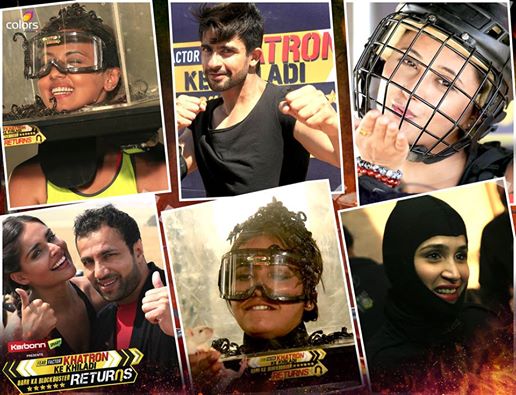 Khatron Ke Khiladi Darr Ka Blockbuster [KKK on Colors] is in the 5th week. There is Insomnia week special where the contestants participate in the stunts without having a sleep in last 24 hrs [Insomnia: sleeplessness] before the stunt. The difficulty in performing stunts got couple of notch higher under insomnia and thus showing mental and physical strength while doing the best holds the key. They will do the elimination stunt tomorrow by having sleep the previous night. Sagarika speaks in Marathi to say Good Morning. Rohit speaks that without sleep even the easiest task becomes difficult. Rohit informs that all the stunts are performed under expert supervision with safety and training, and should not be tried.

1st STUNT: Chakra View, Location: Cordons Bay, Phisantakraal Dam. Cape Town
The contestant will be moving on the aerial platform which has four corners with little space to stand. The platform starts rotating and the contestant needs to start from a corner and collects flags. He/She then moves to next corner and repeat the same procedure. In total, there are 16 flags in 4 corners which need to be collected.  Only the best perfomer will survive and not going to face elimination while the remaining ones will get Fear Phanda. Four contestants participate in this stunt and Rohit selects them.

* Hussain
He speaks about balancing and the side effects of not having sleep. Hussain starts his stunt and walks on the rotating platform and plucks few flags at the onset. He gets stuck for a while but gets composure and walks to the other corner and succeeds. He plucks few more flags and completes his stunt by collecting all 16 flags from all corners.

* Sana
She collects couple of flags and was losing balance but gets fine. However, she looses grip and soon falls down. Rohit compliments Sana and suggests that it was difficult stunt but she did it well.

* Iqbal
He starts the stunt and collects the flags at the first corner and shifts to second corner and collects more flags there after putting some efforts. But soon slips after losing grip and falls down.. After the stunt, Iqbal thinks that his quickness played its part in him losing the grip.

* Rakesh
He plans to complete the stunt. He starts his stunt slowly and collect flags. He does stretching to collect flags and takes time to move to the next corner and soon falls down after losing grip. After the stunt, Rakesh speaks of losing the grip and had stretched bit more than required.

Result: Since only Hussain completed the stunt he escapes the elimination stunt while the rest three gets the Fear phanda.

2nd STUNT: Fhal Safa, Location: Radnon Parrow factory
Rohit have some fun banter with contestants to lighten the scene there and learns from Meiyang that Deepika [actress, star] comes in his dreams and he doesn’t disclose more by citing it is private bringing some laughter.

The contestant needs to go inside a glass chamber where fruits – Grapes, strawberries,.. are placed. There are also legoin (reptile) being present there and few in number, the contestant needs to first find which fruit they need to collect by getting the sticker attached to legoin’s body. They need to collect the fruit which comes in the marker/note using their mouth and put them inside a small glass box. The stunt time is 4 minutes.

* Natalia
She starts her stunt and goes inside the glass chamber and after some efforts removes the sticker/note from Legoin’s body. She starts collecting grapes using her mouth but legoin movements hinder her efforts. She shows perseverance and puts few more grapes buds in the small box and completes her stunt.

* Riddhi
She also needs to collect grapes. She quickly collects the grapes and puts them inside the box. Moreover, collects grapes which were on the floor and not got afraid of the hit by legoin’s lower back. After the stunt, Rohit asks why she was scaring the legoins and compliments her.

* Meiyang
He also got to collect grapes and collects many grape buds at once and puts them in box quickly. He moves all over the place and even blows air to reach to grapes. He sits down and collects grapes in different poses. After the stunt, Meiyang speaks of doing acrobatics practice there.

* Asha
Asha wants to give the best performance as always as only the best will not get a danger card. At the onset, legoin falls on Asha’s legs. She got strawberries to collect. She puts effort to collect some strawerries which were beneath the legoin and manages to collect them quickly. After the stunt, she speaks of her wish to collect grapes but instead got strawberries and remarks that she could have collected more.

3rd STUNT: Car Stunt – Boom,  Location: Randon parrow North
To provide context to the car stunt, Rohit speaks of taking a driving test – Pass or Fail [Boom]. He equates Boom to the car getting a blast.

The contestant has to carefully drive the car on the pathway first an onward journey and should be careful in not touching the yellow cones as there is a penalty. The second stage is taking the reverse and again not touching the yellow cones. If they do touch them with the car, the car will get a blast. The contestant completing the stunt and covering more distance will be the best performer.

* Nandish
Nandish drives the car and during his onward journey hits the yellow cones which means penalty. Nevertheless, he ends his stunt with obstacle course- reverse journey as well but hits the cone before reaching the final end.

* Ashish
Ashish quickly completes his onward journey and carefully takes the reverse and touches the corner’s yellow cone after reaching almost the end resulting in a blast. Ashish speaks of not able to see properly during his reverse step.

* Sagarika
She drives the car slowly during onward step and brings it to a halt. During the reverse, she drives bit precariously and soon the car touches the yellow cone triggering the blast. After the stunt, she speaks of not able to see properly while taking reverse. But Rohit pulls her legs as she drove not so well.

* Rashami
Rashmi drives the car and completes the onward journey. She hits some markers but stays away from the yellow cones but soon hits one of them and the car gets the blast.

Resut: Only Ashish has completed his stunt and becomes the best performer while Rashami, Nandish and Sagarika get the danger band.

Next Episode (Tomorrow): Elimination stunt will be tomorrow but the contestants with Fear Phanda will get one final chance to escape the elimination. The stunts are done in pairs – Walking on moving truck while the other contestant is inside the water tank; Glass chamber with some reptiles; Aerial stunt with difficulty raising the bar yet again.