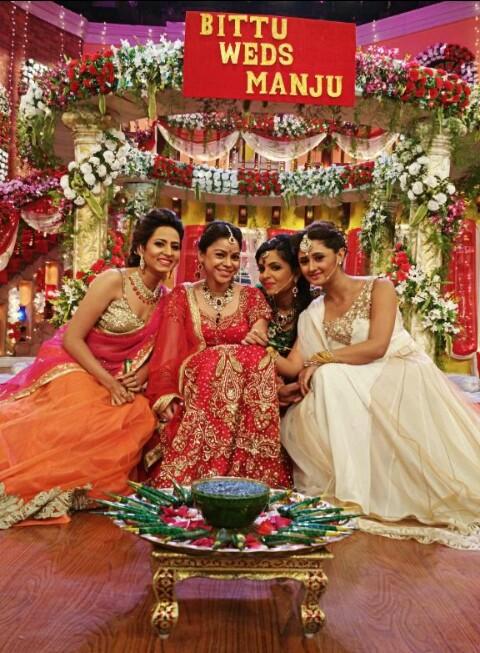 Bittu Sharma and Manju’s wedding is recreated on the  show. TV & Bollywod actresses and stars – Sargun Mehta, Rashami Desai, Elli Avram, and Sugandha are the guests on the show who are enacting the role of Manju’s friends and relatives. During the pre-wedding rituals, the bride Manju’s friends and girl relatives tries to pull the leg of their jija (brother-in law). Bittu is also happy and excited and dances with Sargun, Rashami on the Hone Wale Jija ji song. Sunil Grover aka Gutthi takes the role of Manju’s mom and asks the girls to to not let Bittu go away without giving any thing. He was compelled to give them some gifts. Moreover, Bittu dances with Elli on a romantic song – chand chupa badal mein and this would be his imagination sequence about his to be wife.

On Bittu’s wedding day, there are Baraatis’ accompanying him, and even Dadi, Bua are also part of it. The Baaratis along with Dadi, Bua are having lots of fun during the Baraat procession with Bittu on a replica horse in high spirit. From the bride Manju’s side, some girls accompany her and show care while she feels shy as her wedding is just moments away. Bittu’s sasur is glad to see his daughter getting married and dances with other girls on Band Baaja Baraat song and with much fervor. To make the wedding more hilarious, Bittu takes the saat pheras with the baaratis on a lighter note. There are some more fun moments on the show with Bittu thinking about Manju waiting for him in the bridal dress for their Suhaagraat, however he gets shock to find his sasur in that get-up. Bittu gets much annoyed but has to deal with his irritating Sasur as he tied the nuptial knot with Manju. Stay tuned to Comedy Nights this Sunday on Colors TV.