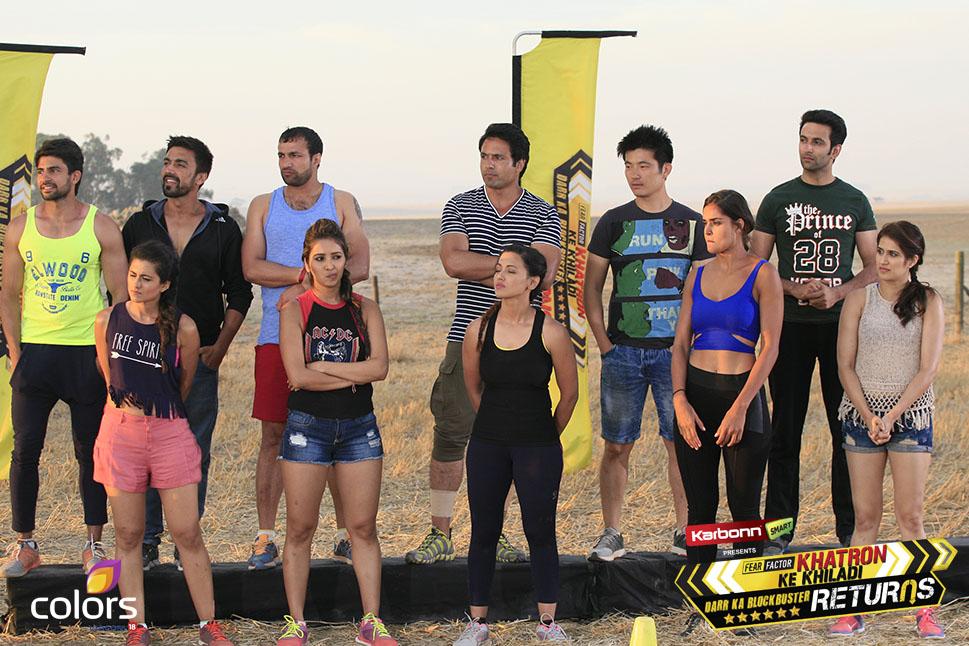 Khatron ke Khiladi Darr Ka Blockbuster Returns [KKK 6] is in the sixth week, and the show has reached the midway of its total run. Rohit Shetty [host, mentor] speaks about many twists in this week, and one of them is the partner stunt. Rashami who was eliminated last week is brough back on the show thereby giving a surprise to all. For the first stunt, Rakesh-Sagarika, Chang-Iqbal, Nandish–Rashami are chosen. Rohit speaks that all the stunts are performed under expert supervision with training and safety in place, and should not be tried.

1st STUNT: Upar Wale Naiya Paar Kara de [Requesting God to drive the boat till the shore], Location: Groot Phigantakraal Dam
One partner contestant will be on the helicopter while the second partner will be close to the kayak [small, narrow boat] in water. The first partner will make a dive in water and swim to reach the kayak and free it by unlocking the knot and the rope. The second partner will swim to push the kayak with the first partner sitting on it. They should reach the shore, and take the flags from the Kayak and run to put them at the flag post thereby completing the stunt.

* Rashami & Nandish
Rashami dives from the chopper and after some hard efforts manage to reach the Kayak. Nandish unlocks the kayak and swims to push the kayak while Rashmi also does her bit. They extract the flags from the kayak and soon completes their stunt.

* Iqbal & Meiyang
Iqbal speaks about swimming being the weakness for him and Meiyang. Meiyang starts the stunt and dives in the water, and after some swimming efforts reach the kayak. He tries to open the knot to unlock the Kayak but has some difficulty. Moreover, the boat makes some circles after unlocking phase but soon Iqbal realizes he can walk too in the water and pushes the boat to shore and completes the remaining part of the stunt. After the stunt, Meiyang speaks of having difficulty in opening the knot and Rohit reminds him about the Kayak taking circles and going in wrong direction.

* Sagarika & Rakesh
Sagarika dives in water with good posture and quickly swims to reach the kayak. The pair work in tandem well and complete the stunt.

2nd STUNT: Bull’s Eye, Location: Altona Farm
It’s a car stunt with the car being a specially designed one and its designing took 1 ½ months. The contestant will be driving this special car by sitting at 6 to 8 feet altitude and applying brakes to paint 5 circle markers and hitting the Bull’s eye if they can. The car stops when brakes are applied but it will also dip with its nozzle hitting the ground on the circular marker. The contestant needs to hit such 5 circle markers and it is more good if the hit meets the Bull’s Eye. Hussain, Natalia and Sana are the ones participating and only the best performer will escape the pre-elimination stunt while the others get Fear Phandas.

* Natalia
She drives the car at a good speed and applies the brake close to the first circle marker but couldn’t succeed.. She ramps on to the ground but bit close to the circle marker. Finally, she succeeded in the fourth & fifth attempt, and completes her stunt. She thinks the stunt was somewhat difficult.

* Sana
She is excited to hit the bulls’s eye and carries some fear before the stunt. She drives slowly, and upon applying brake the nozzle doesn’t dip to touch the ground. She misses all the five markers. After the stunt, she speaks of miscalculating speed and was feeling to have some good speed. Everyone get laugh on Sana candidly speaking of missing markers in the stunt.

* Hussain
Hussain thinks timing should be apt. He starts the stunt and misses the first two markers but succeeds in the third one. He keeps good control on steering and succeeds in fourth & fifth marker. Rohit compliments Hussain.

3rd STUNT: Phata Poster Nikla Hero [The Hero comes out of the Poster]. Location: Altona Farm. Only the best Performer escapes the pre-elimination stunt. Ashish, Asha and Riddhi are the participants.
The contestants need to climb the first ladder to reach the aerial container which is placed and hanging at 45 ft above the ground. Next, need to move across the container and take the spanner midway, and climb the 2nd ladder to reach the top. Then, they need to unlock the cover using spanner to go inside the container and need to join two cables. What happens after is the build up of thrust resulting in them being evicted from the container and flying in the air with their robes and harnace. Ashish comes out as winner of the sack race [with himself, Asha, Riddhi] and decides the ordering.

* Riddhi
She climbs the first ladder to reach the container quickly and soon completes the remaining leg of the stunt – joining the cable and evicting out from the container. Riddhi speaks on having an amazing feeling and thinks herself as a bird.

* Asha
She starts the stunt and quickly climbs to the top of the 1st ladder. Sooner, she completes her stunt by evicting out of the container. She calls this particular stunt as the best one of KKK and suggests that she cannot define such experience.

* Ashish
Ashish completes the stunt much quickly and even employs some idea during unlocking of the container cover. He is much excited after completing the stunt.

Pre-Elimination STUNT 1: Sharing and Caring. Location: Luke Farm. Sana, Asha and Riddhi are chosen and only the best performer will not face elimination stunt.

The contestant first needs to take the meat bag from a marker, and then come to a place near the cage having a lion. The monitored and trained lion comes out of the cage while holding the meat bag in the mouth, and the contestant needs to run to reach the marker at some distance from there, and overcome the resistance and pull.

* Sana
She gets worried before the stunt. She starts her stunt and comes close to the cage after getting the meat bag tied to the rope attached to her body. The lion gets the meat pack and doesn’t let Sana run towards the marker and pulls her.

Next Episode [Tomorrow]:Will Sana succeed in the lion stunt by reaching the marker? Riddhi is dragged during the stunt with the lion and she hits to the ground. Glass chamber stunt with 20,000 cockroaches and 50 snakes near the head difficult. There is water stunt, and Natalia is one of the contestant performing and Rohit asks her to not outpour much emotions. Salman Yusuff Khan comes as the wildcard entry and going to compete with the contestants for the remainder of KKK journey.