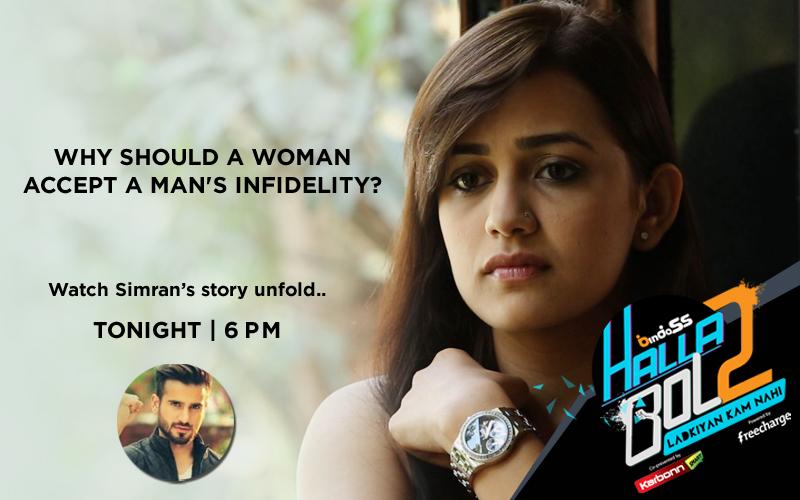 Karan Tacker (the host) speaks that marriage is a relationship which makes two people as one and speaks about how girls need to compromise and the society expects that if the husband gives her a comfortable life with luxury that’s enough. The story is about Simran and her fightback from infidelity. The story starts with Simran seen at the party with friends and soon her husband Rohan comes there and she is glad. He comes and hugs to her and even apologizes for coming late. Rohan’s friends congratulate Simran with Happy Anniversary wishes. Rohan is glad and kisses her [Ab Tum Hi Ho… Aashiqui.. song plays]. They celebrate with their friends and have dance. Next day, Simran calls Rohan and he speaks of being busy at work and will come once finishing work. Soon, she gets a call from her friend Tina who thinks her anniversary is going on still since she has seen Rohan’s car infront of a club. Simran is surprised to hear that. Later, in the night Rohan comes home and he speaks of having much work and couldn’t able to breath and was much hectic. He excuses himself to go for a bath and Simran ponders whether to check his mobile or not.

Next morning, she finds him busy on his phone and having smiles. She gets a doubt on him and soon hears him speaking to a girl. She gets quiet and on another occasion checks his mobile to find a message that he will be meeting someone. She follows him and discovers that he is going in his car with a girl. She reaches the club after following him and manages to reach his room. She finds him speaking with a man on some official purpose and showing gratitude. Simran is relieved that Rohan is not cheating and later meets Tina. She informs Tina on having her mistake to keep some doubts on Rohan and speaks of feeling guilty. Tina tells her to forget it and soon Simran calls Rohan since she wants to go to her mom’s home. He speaks of missing her and gives a greeting fondly. At her mom’s home, she reminsces about the past events in her life with Rohan and ponders more. She speaks to her mom of missing Rohan and wants to return to her home. Her mom suggests yes she can go back. Simran comes home and finds Rohan’s car and gets happy and soon comes to her room to give a surprise to him. To her dismay, Rohan’s girlfriend comes out of the restroon and Simran gets a shock and runs from there. Rohan tries to mediate her but Simran replies that everything is over.

Later, she gets a call from Rohan but she doesn’t pick it up and soon recollects the moments she shared with him. She also remembers his promise that he will love her all his life and starts crying in her mom’s presence. The story moves forward by 10 days and Simran goes with her friends to a restaurant. But she still remains quiet there and Tina speaks of getting Rohan’s call and informs he was feeling sad. Anita, another friend thinks Simran needs to give him a chance. Tina suggests that once a cheater is always a cheater. Anita speaks of being a girl and understands her and suggests that problems are in everyone’s life and they need to be sorted out. Anita speaks of calling Rohan there without asking her. Simran finds Rohan there and he stops her and asks whether she wants to break their marriage. She gets teary eyed and he admits on his mistake and speaks of loving much. He then speaks of giving her comfort and she asks what are those comforts which define he is a good husband. She asks whether he wants her to forget his mistake by downplaying it but she can’t do it and leaves.

Simran comes home, and meets Rohan’s mom Mummy ji who suggests that she needs to go back to his home. She admits that it was wrong but asks Simran to manage the home and its not in men’s nature. Simran even tries to inform her mom that Rohan doesn’t deserve her but she suggests that marriage is not a joke and cannot be broken. Her mom reminds about Nupur aunt settled in US but she counters by saying it is a compromised stay. Her dad suggests that life goes on with compromise and understanding and thus she needs to go. Karan (the host) speaks that its very strange that Simran’s parents want her to go to the same man who has broken her trust. Simran was compelled to listen to her parents and in-laws and she went back to Rohan.

Rohan hugs her to see her back and also offer thanks for forgiving him. She speaks that they know each other since many years and she loves him but she needs some time to fix their relationship. She wants to work and do job to get back her self-respect. He speaks of wanting to help her in job search. She says thanks but she already got a job and will start work from tomorrow. Simran starts her work and there meets a guy Harsh and recognizes him. She greets him and informs that they are meeting after a long time and he is her college friend. Later in the night, Rohan speaks of wanting to see movie tomorrow and also dinner for which she agrees. Rohan tries to come close to her while they are about to sleep but she shows her reluctance. Next day, Simran gets compliment from her boss on making good presentation. In the night, Rohan gives her a surprise by arranging a candle light dinner. She gets happy and starts serving him the food. He speaks of knowing today that she has really forgiven him. Soon, he gets a call and both feel awkward and he speaks of getting call from office. The call comes another time..

Later, she overhears Rohan speaking to someone on meeting in office and sorting it out. She cries on getting the doubt again and thinks he has cheated her again. Next day, she meets Harsh at a restaurant and informs him of Rohan cheating her once again and she has listened to his conversation with a girl. She cries and wonders why he is doing such thing and she has forgiven him earlier, and thus in much shock. She asks Harsh for help. Harsh drops Simran at home and Rohan sees them together. Rohan asks Simran that she is coming late and she replies of having much work in office and speaks about Harsh being her college friend and colleague. He gets more jealous and checks her phone to find some messages exchanged. Next day. Rohan receives photos of Simran and Harsh at his office and gets much upset. Later, in the night Rohan invites his parents and in-laws to his home and when Simran comes home, he confronts Simran and shows her those photos. He asks where she has gone with Harsh – his home or some other place. He asks her parents and speaks on cheating since he is having such a wife. He speaks of asking forgiveness after cheating once and goes on to insult Simran more. She asks him where were all people when he cheated and if she cheats then everyone points finger at her.

She informs him on sending those photos by herself and Tina has took those photos. He gets shocked to hear it and she informs him of hearing his conversation with Isha. And she learnt that he still has the affair and thus she thought to involve Tina and Harsh. She speaks of intentionally coming late to make him jealous and wants him to feel the same what she was feeling. She speaks of planning those thing to teach him a lesson. He thinks she is lying and all such thing is drama. She gets teary eyed and speaks of coming back after both parents (her and Rohan) told her to come back. She thinks herself as a fool and suggests boldly that he doesn’t deserve her. She speaks of done with him and wants a divorce. [Halla Bol tune plays]. Simran’s dad apologizes and Rohan’s mom also speak that he is wrong and her parents inform that self-respect is more important than money. Rohan’s mom slaps him when he asks how she can believe them. Simran continues to keep courage and leaves from there. The story ends on that note with Simran keeping her self-respect and gender equality high without worrying much about societal pressures.

Karan speaks tat Infidelity is such a thing that shakes relationship and nothing remains after in a marriage. Most of the times the girls are forced to stay in marriage where there is infideliy but why girls need to think about society.  Why no one asks the boys and what people say to a man who cheat ? Karan appeals all the people to support, give strength and help the girls who are in a similar situation like Simran and should gave her back the control in life. Karan signs off by asking the girls to have dreams and to not be quiet since they are not lesser than anyone [Ladkiyan Kam Nahi in hindi].