Nisha gets ready for her marriage with Kabir in red bridal dress with her mom’s lehenga, dupatta, Maang Tikka and jewellery while going through many emotions. Viraj’s entry on Nisha’s wedding day brings a twist since he puts earnest effort to convince her on stopping the marriage. He requests that her marriage with Kabir cannot take place. Viraj  speaks of knowing the truth and realizing his love for her, and moreover holds her hands with sincere emotions. Nisha gets swayed by Viraj’s acceptance of truth & realization of love and inches closer to rethink on stopping the marriage. While, Nisha earlier after the wedding card shop confrontation with Viraj thought on closing the love chapter with him, but its not easy in practice. It looks certain she is going to give a second chance to Viraj & her love after emotional outburst. Will their mutual love for each other puts a full stop in her marriage with Kabir ? What will be Nisha’s family take on her decision ?

Raman begs to Shagun to give Ruhi to Ishita and apologizes to her. Ruhi witnesses Raman folding hands and crying infront of Shagun. Shagun keeps a condition that he will get Ruhi if he takes her along to Bhalla house. Adi feels no one loves him and Raman gets worried for his mental stress. Mrs. Bhalla and Simmi shower love on Adi to relieve him of his loneliness. Ishita too loves Adi and wishes for a happy family. He recalls Ishita’s words that Ruhi can withstand any pressure as she has learnt to have patience and seen more of relations’ complications, where Adi has been living with just Shagun and does not know dealing with such problems. He considers both his children equal and decides to let Ruhi stay with Shagun. Ishita gets much angry with him on this decision and they both have big arguments over it.

Bhabho sees how Bulbul is trying to give the best to her sibling and comparing them to be of low stature. Bhabho comes in competition to give her grandchild better things and Babasa explains her not to make this a race with little immature Bulbul. Bhabho is hurt by Sooraj’s greatness and Sandhya’s sacrifice and is having much pain to get away from her one grandchild. She worries for the different backgrounds, upbringing and status of both babies, which will make them against each other one day. The way Bulbul comes infront of her to see the babies in sonography makes Bhabho realize her worth. Nevertheless, she gives same love to Sandhya and the babies.

Dadda ji gets unwell and is gets rushed to the hospital after getting unwell, and he speaks to Akshara. He asks her to keep the family unite, no matter how things change with time. Akshara promises him, and the scene reminds when Gayatri Maa took Akshara’s similar promise and died peacefully giving all responsibilities of family to her. Dadda ji dies leaving away his good memories with everyone. While Akshara finds this a big loss for Singhania family by Dadda ji’s death, she still becomes a magical fairy for all of them. The show will be taking a 10 year leap and everyone will get a modern perception with Indian earthy roots.

While Manjeet also knows Bansuri’s fears and is suppressing her, she talks to her son on phone, and says she has not told anyone for what she has come to stay with Balwant’s family. Her motives looks unclear and somewhat evil to snatch away Baldev from Bansuri on pretext of claim of Baldev being her son. On the other hand, Ratan gets into important work to unite Ranvi and Gunjan and end their differences. She tries hard to explain Ranvi not to do the same mistake which she did by not forgiving his dad Sampooran Singh. Ranvi tries to end his anger and makes a move towards Gunjan. Gunjan gets glad and hopes Ratan will make everything like before.

Simar and Fake Roli aka Maya are in tussle with Simar informing her that entire Bhardwaj family will face her in unity and she will be the biggest wall. Maya wants to take revenge at any cost and earlier promise is not her weakness. Prem & Amar comes with Baba [person who can help them in tackling Maya’s revenge & attack] and so does Puja (prayers) at home. Maya comes to know that those special prayers are part of a process to make her human and gets agitated. She comes to Bhardwaj family’s home and vents out her anger at Simar and the family. Nagin starts threatening Pandit and Prem, and on that instant Simar steps in. Simar confronts her with a Trishul and asks her to stop attacking the Pandit. Simar is defiant to attack Maya. Maya has earlier given Simar 24 hours to have Siddhant with them, and after that time passes she will take him along after mesmerizing, and a large chunk of time has passed. Will Simar & family succeed in bringing peace to Maya’s husband via funeral, and also take away Maya’s powers ?

Chakor is copying her homework from the class board into her notebook. Bhaiya ji’s son Suraj comes there and locks her in the class room and makes a taunt that she can complete it there itself and not at home. Chakor tries to plead him in not locking her there but in vain. Chakor gets tensed. Suraj says its Friday and the school will be closed for two days, asking her to be in school alone. Chakor worries thinking how to leave and go haveli.

Anu attends the guests in the function. She plays the CD and gets stunned seeing Neil and Devyaani’s kissing moment. The entire family gets dumbfounded by this sudden unknown thing, which Devyaani did not share with her sisters. With Neil being away to Chandigarh for business expansion, Devyaani is left alone to answer everyone.

Kokila gets a heart attack when she goes in Ahem’s engagement. Ahem and Jigar worry for her and take her in the car. Meera stops Gopi from driving and asks for the car keys. Gopi asks her to have some sense and not argue in this tough moment. Kokila could not bear Ahem and Mansi’s engagement and she is worried for Gopi. Gopi makes Meera sit in back side and drives the car. Meera hates Gopi that she has not done her upbringing and was not there when she needed her mother. How will Gopi make her place in Ahem and Meera’s heart?

Amaya will get friendly with Mantu after he initiates help towards her. Mantu is a sweet, helping and smart guy, who aims to see Banaras having good progress. Amaya’s determination and Mantu’s ideas get clubbed to kick start Amaya’s journey to support her family. Mantu is very helpful and Amaya finds him good hearted, while Rudra is cheating the Mathur family by duping them of huge amounts for petty works. Sneha was depending on Rudra for almost everything and Amaya realizes Rudra is not like he portrays himself. Will Amaya bring out Rudra’s evil intentions?

Suhani’s tears and Yuvraaj’s silence does not end their distance even when they are together. Suhani has known Yuvraaj’s love for Soumya and she is shattered. Yuvraaj feels guilty to hide this, but he knew even if he says she will feel bad. Suhani is upset that he did not wish to marry him. Suhani talks to Soumya and asks why did she hide this from here till now. She feels its not Soumya’s mistake, but Yuvraaj’s. Yuvraaj does not speak up his feelings for Suhani, and we hope he speaks out to bring Suhani back in his life as his rightfully wedded wife. Suhani is still unknown to Pankaj’s truth and what will be her reaction when she knows her dad regarded her so weak to break down, that he got her married to Yuvraaj against his will.

Ashoka gets upset when Bindusara destroyed the idol which he regarded as his mom. Soon, Ashoka comes to term that his mom is not alive as even idol is destroyed. Bindusara gives him strength by taking care of him as father but Ashok wants his guidance and not father’s responsibility. Ashok still carries pain for his mom. Meanwhile, Chanakya confronts his spy Nirjara and is shock to see her as Dharma, and this clarifies that Nirjara was murdered by Helena’s soldiers and not Dharma. Meanwhile, Helena and her dad Nictator has sealed a deal with king of Ujjain to kill the entire Maurya royal people, and her conspiracy is underway, and Chanakya has some sense of it.  At Ashok’s end, he prepares to embrace the upcoming future after getting motivated from Bindusara, and gets ready to return to Pataliputra, and going to accept what’s store in his destiny. Will Ashoka be able to see his mom Dharma ?

Pratap and Ajabde prepare to return to Chittor after he realizes his responsibility of taking care of Ajabde, family and also Mewar. Pratap cancels his aim of taking Deeksha or to become Sanyasi with Tulsidas ji [Sanyaas: renunciation of the world & abandonment]. Tulsidas ji motivated Pratap in taking that decision, and thus Pratap’s decision has rekindled hope and happiness in Ajabde. Ajabde is pregnant but was unable to share good news with Pratap earlier but soon she is going to inform him about it. Pratap’s return to Chittor paves the way for him in taking active role in state affairs, and resolve the matter in his family. What will be Pratap’s reaction and plans once he learns about Ajabde’s pregnancy ?

Abhi gets recovered thanks to Pragya’s timely efforts with much hardwork. The kidnapping drama comes to an end with Pragya & Abhi returning back to their home. Soon, they start their usual Nok-Jhok, fun banter and gets an opportunity when Pragya tries to fix Abhi’s rockstar photoframe on the wall. She attempts several times to put it but after garnering Abhi’s support she manages to do well and gets glad. There is another development, Bulbul tries to implicate Aaliya on her role in kidnapping and contact with Neil in front of Dadi and to expose her truth. Bulbul hatches a plan to expose Aaliya with help from Puneet. Aaliya goes to meet Puneet to give him money and take back the evidence but soon Dadi comes there and catches Aaliya red-handed. Dadi gives a slap to Aaliya but soon she cooks up her own version of the story and thwarts Bulbul’s plan to expose her. She reminds Dadi on giving fake money to Puneet and tries to remove her name and also role in the kidnapping. 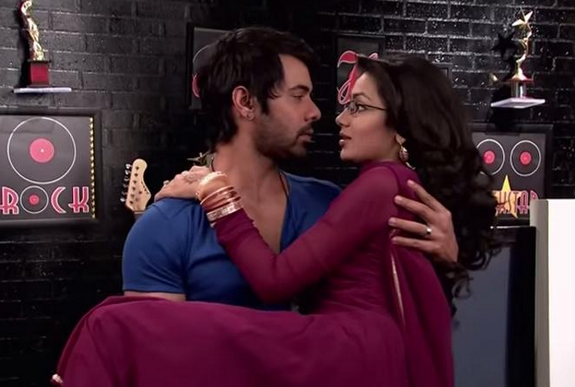