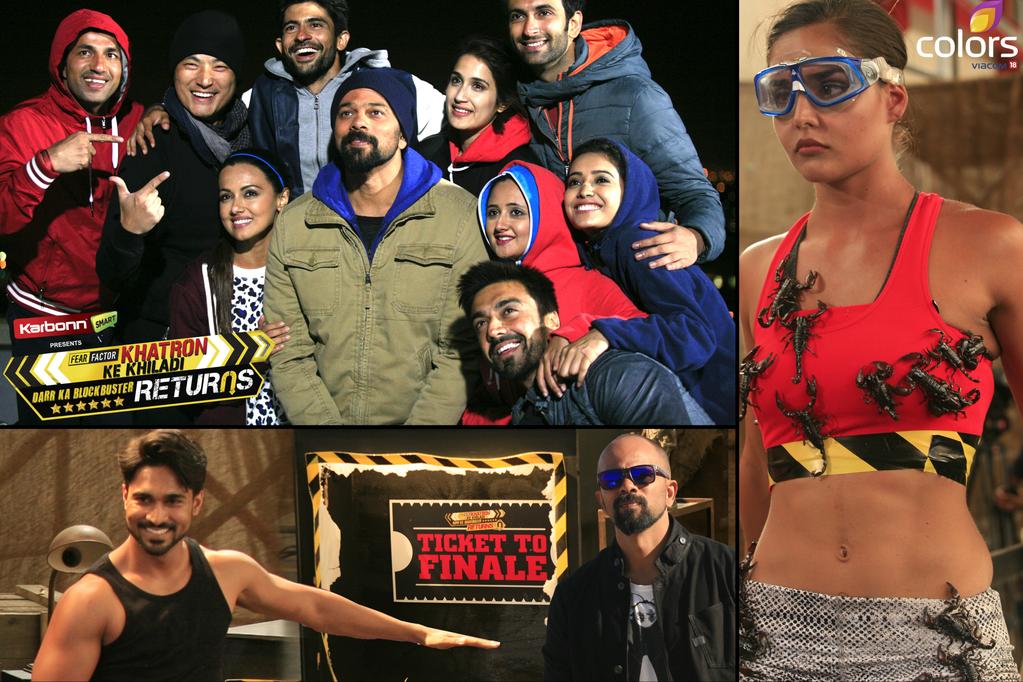 Khatron ke Khiladi Darr Ka Blockbuster Returns [KKK 6] is in the seventh week on Colors TV. Rohit speaks that all the stunts are performed under expert supervision with training and safety in place, and should not be tried. This week is the Jodi Special and there will be stunts with partners. The best performer of the stunt get 2 pts while the other Jodi gets 0 pts.

The chopper, boat and water are at play. The two partners are in motor boat and the chopper will throw a hook which should be used to attached to the boat and the boat soon will be in air. There are 15 flags below the boat and each partner need to go either side of the boat and reach the bottom to fetch flags and throw them in the water. If the first partner falls in the water, then the second partner can complete the stunt and the time will be calculated until he/she dives in the water. The partner set taking the least time is the winne and the best performer.

* Natalia & Meiyang
Natalia reaches below the boat and hangs to the ropes while removing flags. She removes many flags while Meiyang reaches the bottom of the boat after some efforts. Natalia jumps first and soon he also dives in some seconds to complete their stunt. Meiyang speaks of needing much strength.

* Salman & Sana
Fun banter before their stunt: Ashish speaks about Sana- isms. He talks about Sana’s make-up and how they get some jokes. Rohit also joins in and speaks of receiving a joke about Sana in how she just says  sir..sir everytime. As Sana was unable to complete her first stunt in last weeks, Rohit on a lighter note pulls Sana’s legs and urges her to do atleast one stunt and requests much.

Sana & Salman start the stunt and once the boat gets in air, he quickly reaches the bottom and starts removing the flags. The boat is moving in the air with Chopper around. But Salman puts strength and efforts in removing all the flags. Sana didn’t participate in removing flags and was also afraid to jump. He pushes her so that she can dive in water. Both complete their stunt henceforth. Rohit speaks of time wastage as Sana didn’t jump earlier.

Rohit speaks of Advantage which he has been discussing since many weeks. Ashish gets the Advantage Hat from Rohit. Rohit speaks Ashish never went into the elimination. Ashish dances and soon everyone joins in and have merry. With Advantage, Ashish can decide to back out from the elimination if he comes there in that round. But it is applicable only for this week.

There is a moving car and bus with one contestant driving the car while the other shuttles from the moving bus to the car’s top and back to the bus.. All in motion, and the one making rounds has to fetch flags from the car, and return back to the bus and hook them. Additionally, the car partner can give flags to the other partner by removing them from inside the car but one flag at a time. It is not time-based stunt rather will stop after covering some distance.

* Rashami & Nandish
Rashami while driving gives Nandish flag one by one and Nandish is seen with harnace support. During his stunt, he misses the spot to enter bus, and after some efforts gets into the bus. Few moments later, he ramps into the bus and goes into air many times after losing balance and drifting away from the bus. This leads to him being away from bus’s entrance but nevertheless he manages to hook flags. After the stunt, Rashami speaks of speeding up and also lost 2 flags. Rohit asks why they haven’t focus on outside flags first but instead took the inside flags which brought distraction for Rashami.

* Hussain & Ashish
Ashish drives the car while Hussain makes the rounds to collect and hook the flags. He quicklly gets the flag from the car, and hooks in the bus. Hussain keeps balance well and makes several rounds. He even manages to balance himself when bus was making turns. After the stunt, Hussain thinks Ashish drove well while speaks of his efforts in making rounds to be easier.

3rd STUNT: Chillar party, Location: Denel
Before delving into the actual stunt, Rohit informs what-if there are many participants coming in between two friends, and refers participants as friends. Sagarika & Iqbal; and Asha & Rakesh are partner sets

The water tank is filled with small crocodiles at the bottom while frogs are placed at the top. The partner contestants will be inside the water tank with only their heads outside. There are coins on top of water, and the first contestant (male) needs to take it from his mouth and give it to his partner who will collect it through her mouth. She will then put it into a tube close to her, and collect the same coin from tube’s end using her hand, and pass on to her partner. He will then collect and deposit it in a box. The same process is repeated for 4 minutes. The one putting more coins in the box is the best performer. There is some laugh when Iqbal asks about the size of the coin.

Asha and Rithvik Meetup: Rohit speaks of giving a special surprise to Asha as she was depressed after Riddhi bid adieu last week. That surpise is Asha meeting Rithvik though she haven’t expected him there. Rithvik motivates her and makes a comment that she has done well with best performer in the first three weeks, and has made her mark on the show. Upon hearing it, she gets glad and happy.

* Sagarika & Iqbal
Sagarika starts the stunt and feels scared at the onset and also the sight of frogs and crocodiles brings vomitting sensation. But she overcomes it and they start the stunt. Iqbal misses some coins and on some occasions she drops down couple of them and doesn’t put them inside the tube. After the stunt, Sagarika speaks that frogs were touching her neck.

* Asha & Rakesh
Asha takes some time to put the coins inside the tube. But soon she gets pace and both work in tandem well.

Rohit signs off with Khiladis by asking Meiyang to enact like a statue while standing on a box and also sing. If he leaves from there or stops singing, the box will explode. Meiyang sings Tune Mari Entry… song with nervousness and again Ashish pulls his leg.

Next Episode [Tomorrow]:
– There will be Partner stunt with the same Jodis.
– Some of the Stunts: Natalia breaks down after performing a stunt with 500 scorpions around her body. Bus stunt with contestant on a slider on the ground. Rashami & Nandish loose their balance while performing aerial platform stunt – Rashami standing on top of Nandish’s shoulders to fetch flags.
– Fun Banter: Rohit asks Sana and Salman whether he is shooting in Ooty and as a Tamil movie director. He makes that remark after finding Sana clings to Salman as he holds her in his arms, and Salman did that lift upon Rohit’s insistence.
– The partner sets getting 0 will face the Elimination stunt.
– Rohit informs 2 Khiladis will go home. There is also special Ticket to finale twist with the recipient getting direct entry in finals. Who will be that winner ?