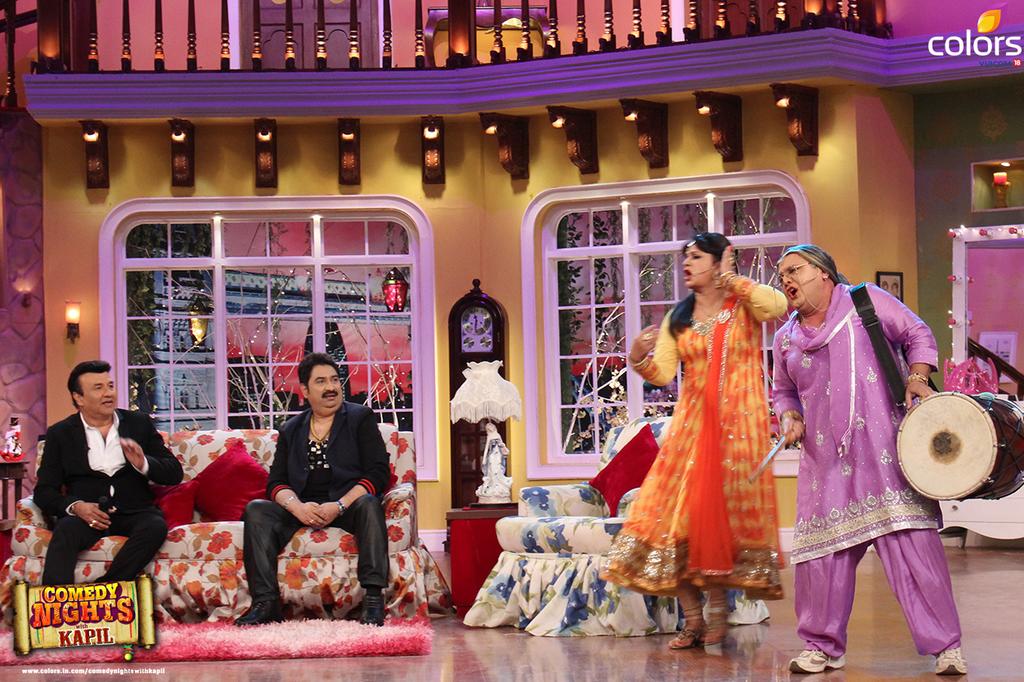 Kapil starts the show and speaks to Siddhu that in India every minute 34 kids are born. He then talks in lighter vein about controlling India’s population as his show’s timing gave them the excuse to stay away from bed bringing smiles. Kapil speaks that 100 years are completed in Bollywood and talks about old times. He gives comparison of the old times with the present – movie running 25 weeks in theatres then, and now within a week the movie makes all its business. Then the movie runs for the next 25 years on TV  and gives an example of Suryavansham movie. Kapil speaks of coming with a film whose story he developed by fusion of old movies like Queen [2014] and Deewar [1975].

Kapil dons the character of Ravi [Shashi Kapoor in Deewar], Sunil Grover takes the role of Vijay [Amitabh Bachchan in Deewar] and Daadi comes as Karan & Arjun’s Maa [Rakhee in the movie Karan Arjun, 1995]. Daadi forgets to be in character and asks first for alcohol, and then speaks in teary voice of bringing milk for her children from outside after doing labour work. Bittu as Ravi asks whether she is going to spit on his face while carrying the mannerisms. She informs her sons of taking help of Lala for their upbringing who used to tak her anytime for the favor. Ravi thinks that Lala has done their upbringing. She suggests they don’t know Lala, and Vijay wants to do something about it while Ravi asks whether he needs to do brush bringing smiles. Vijay thinks they need to go to Delhi but Ravi suggests otherwise – how about going to Mumbai as there will be Zeenat Aman, Meenakumari and can have much fun bringing laughter. Vijay asks his mum for blessings and she asks them to come back after getting success. Bittu as Ravi asks why they should come back if they have succeeded in endeavors. On that note, Vijay & Ravi leave to Mumbai.

Anu Malik & Kumar Sanu’s Interaction & Fun with Bittu & his Family. Kapil welcomes Anu Malik and Kumar Sanu and calling them as his favorite singers. Anu sings the song Khol Aankhein.. Kadam Kadam. to mark his entry while Kumar Da sings the romantic song – Jab Koi Baat Bigad Jaaye.. Jab Koi Mushkil Padjaye.. Tum Dena Saath Mera Oh Humnawa...to mark his entry. Kapil speaks of getting reminde of Kumar Sanu’s previous visit on his show. He then talks about Kumar Da’s movie Dum Laga Ke Haisha.. where he was called to Haridwar and even it has 90’s set-up. Kumar Da speaks that he was told about 90’s clothes, hair set-up and Bittu asks how about underwear, whether it should be of  90’s. Kumar Da replies nobody can check his inners so it doesn’t matter the year bringing smiles. Palak and Gutthi comes next with Gutthi coming with a pink shade girls’ bicycle.  Palak starts singing and grooving on Mera Haathon mein Naun Naun chudiya. Hain.. Zara Thairo Sajan Majbooriyan hain..song [Chandni movie, 1989, singer: Lata Mangeshkar]  and even comes with a small Dhol. Bittu pulls Palak’s leg and suggests she has 9 poori’s in her stomach so how come 9 bangles in her hand bringing laughter. Palak and Gutthi are in their mood and continue dancing. Gutthi goes to sing  a song – Mere Gutna se Lambi Meri Choti Hain.. and calls Palak as Moti [fat girl] in her lyrics. Sooner then, Bittu stops Gutthi and Palak and learns they were actually going to Sangeet ceremony but made their stop midway. Palak gets excited after finding Anu and Kumar Da there, and she says the line – Oonchi Hai Building Lift Teri Band hain Kaise Main Aaun song [Judwaa movie, 1997], one of Anu’s song which he sung.

However, Gutthi has a different take and thinks Anu-Kumar Da came there to hit them after hearing their songs. Dadi and Bua comes there with Dhol and starts singing Sajan Ki Galli.. Sunehri Gote Mein.. Bittu makes a taunt at Daadi to sing such songs which are dedicated to girls who are going to get married. Daadi replies to Bittu that she knows her identity of being Daadi and everyone knows. She clarifies on doing preparation for attending lady’s sangeet ceremony. So, two parties (teams) want to go for the Sangeet – Daadi-Bua & Gutthi-Palak. Bittu wants Anu and Kumar Da to decide who will go to the Sangeet by a competition. Bittu thinks Antakshari can serve the purpose and Anu agrees for it. Anu speaks for Daadi a line – Monday Tuesday or Friday, Daadis kiss always works which is a compliment, and gets Daadi’s kiss. Kumar Da gets Palak-Gutthi and Bittu continues to make taunts at Palak and calls her as Miss. Garbage. Daadi-Bua are on the side of Anu. Soon,  Antakshari starts with Gutthi drawing the line to seperate the teams. She starts singing – Baite Baite Kya Kare.. Nikalni Hain Badhaas.. Shuru Karo Antakshari Band karo Bakwaas. She suggests Antakshari needs to start with Ma… Daadi starts singing Maazigar O Maazigar.. [spoof on Baazigar O Baazigar song from Baazigar movie, 1993].  Daadi wants Gutthi-Palak to sing with Ra.. but Palak starts singing  Dekho Baarish Ho Rahi Hain.. song. Daadi gets angry since she was supposed to sing with Ra..and not Baa. Palak reminds that literal translation of Baarish Ho Rahi Hain.. in english is – Its raining….

There are some more fun moments in the show with Gutthi and Pinky Bua grooving in their dance with excitement while Anu-Kumar Da are singing a song. Kapil thanks Anu and Kumar Da for coming on his show and the show ends on a happy note with everyone sharing greetings with Dard Karaara.. Ishq Ne maara..song [Dum Laga Ke Haisha movie, 2015] from  playing in background.  Stay tuned to Comedy Nights on Colors TV.

* Kumar Sanu earlier appeared on Comedy Nights with singer Alka Yagnik last year on 25th May. Follow the tag Kumar Sanu to read the articles written on episodes with him.