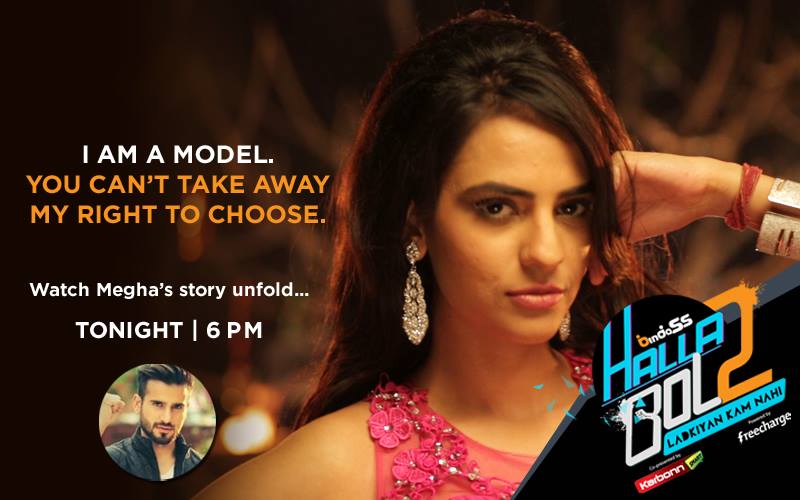 Karan Tacker (the host) speaks that people judge girls with their dresses and starts doing moral policing and start making judgements and he widens the discussion to people passing comments and opinions on celebrity or a model. Today’s story is of Megha and her fightback. Megha is seen giving a shoot on a set and soon there is fire to her dress which makes her worried and the director speaks of postponing the shoot but she continues with it. She gives many more poses and the directior (DOP: photography) is happy with her and soon ends the shoot. Megha’s younger sister is very happy to see her elder sister’s shoot. Megha speaks of working hard for 2 years in Delhi and now she wishes to stay for some time in Ludhiana at her family home town. She thinks her dad would be excited on the news of her arrival.

Megha comes to her home with her sister in Ludhiana, Punjab. Her mom gets glad to see her. She asks Megha on why she colored her hair while she informs on staying for a month and going to relish Rajma Chawal food. Megha speaks of a surprise to her dad and shows him the magazine with her photos. He gets glad and soon her mom Geeta finds Megha’s photo and asks what people will say if they see those photos. Megha’s dad supports her but her mom Geeta looks not so happy. Reema comes there with her mom Shalini who speaks of her daughter doing only MBA and not modeling. She tells Megha’s mom Geeta that she should control her daughter who cannot evade boy’s eyes from those photos. Shalini then herself speaks of using creams after seeing TV Ads to get glow on her face and is confident since models are beautiful. Megha makes a small taunt on Shalini Aunty’s duality stand and suggests to her so she meant Ad models gives her hope. Later, Megha learns of marriage at a farm house where celebrities are expected to come. Next day, she attends the wedding at the farmhouse and soon some women recognize on seeing her in an Ad and takes photos alongside her. Megha’s mom Geeta meets the same women and they ask megha on wanting to meet celebrity in Delhi and how does she feel.

The lady informs Megha & Geeta that her son works in corportate office and earns 2 Lakhs rupees per month and then asks Megha how much she earns in modeling. Megha replies of earning 1 lakh in last modeling assignment and soon they leave. The same lady goes to speak with other women and suggests the model does all the things which hamper their respect and Megha’s mom Geeta hears it. There are also some boys at the party scene who are drinking and Ashish learns that she is a top model. Megha recognizes him as Ashish, Gupta ju’s soon and comes to meet him.  She introduces herself – Anil Mehta’s daughter and reminds him of playing together during their childhood days. She speaks of knowing that he went to London for graduation. She talks more on her work of doing modeling in Delhi and fashion shows. He introduces her to his friends and he asks when she did come back from Delhi. They talk more and both speak of having good time at the end of wedding.

Megha before leaving asks him to ping her so that they can catch up next time. She offers a hug before leaving and her mum Geeta sees it. The story moves forward by 3 days, with Ashish sending a mobile message to her for meetup. Both exchange messages on phones and agrees for a date. He looks at her magazine photo and smiles. She meets Ashish at a restaurant and take coffee together. She speaks of having diet and model’s life is much difficult but feels good to be on hoardings. After their conversation and meetup, he drops her home. Megha finds Shalini Aunty leaving her home, and soon receives the taunts from her mum about neighbours speaking in bad taste about her. Megha’s dad comes to defend her and asks what wrong she did and only went to meet her childhood friend. He advises her to listen to mom and be cautious. Meanwhile, Ashish’s friends asks him why he didn’t proceed to open up more infront of Megha with his intentions though she came to him by herself. He shrewdly speaks it is Art, and wants to gradually approach her and his friends compliments him on that note.

Karan (the host) speaks that for family’s respect why a girl has to face problems and why she is blamed for all the things. When Shalini aunty informed Megha’s mum, she was questioned and also society’s pressure came into the picture. He asks why men doesn’t support girls in their fightback and urges all to support the girl.

Megha later meets Ashish and talks about her mum’s feelings of insecurity and societal pressure and they drink. She suggests that not all boys are bad. He suggests she can share her feelings with him. Soon, he tries to put his hand over her and she comes to know of it. She wants to leave and he asks why she is showing attitude and tries to apply force on her. He tries to suggest as she is a model so she should be fine with him. She slaps him and informs that he needs to stay away from her. She comes home and cries and soon her younger sister comes to know about her state. Later, Megha is puzzled and wonders why Ashish thinks about herself in that way and she has never give him any wrong signal. She doesn’t want to tell her parents and gets consoled by her sister. Meanwhile, Ashish meets his friends and boasts on having good time with Megha. He cooks up a story and speaks of seeing the paradise (Jannat) and they hold hands first and then she didn’t stop. Shalini Aunty hears it and soon goes to Megha’s home and takes away her daughter Reema from there. She informs Geeta that Megha went with Gupta’s son Ashish and had much enjoyment which is a taunt, and also people are making fun of them. Megha tries that nothing such have happened and doesn’t know why Shalini Aunty is behaving in such a way. She then comes to meet Ashish who is at a party scene and informs why he is lying since knows nothing of any sort happened yesterday.

He cooks the story more and informs that she was showing him magazine’s phots with her short clothes. She asks him to tell nothing has happened between them. He drinks more and continues to speak to all in loud voice there on having lots of fun and drinks. Also, he makes a taunt “nothing happened between them” and asks whether she is happy now. His friends also repeat the same words. Megha comes back home and Megha’s dad receives a call and the guy wants to know how to come close to her. He gets agitated and threatens the guy/caller of police complaint. Soon, he breaks down and speaks of people poking fun and also the family’s respect built in many years got shaken and he doesn’t keep positivity and hope. Megha hears that conversation and recollects Shalini Aunty’s taunts, Ashish’s accusation and taunts to demean her, and also her father’s words of respect going away. She tears the magazine cover with her photos and cries more. Next day, her dad speaks that the talk has spread the entire city and there is only one solution and she needs to go back to Delhi and settle there permanently. She speaks of not going there in this situation and not leave her parents alone. She wants to do fightback and prove herself right. Shalini aunty comes to her home and informs that Ashish is getting married with his father’s business partner’s daughter in some days. She also reminds that girls need to be careful and the boys doesn’t care much.

After coming to know of Ashish’s marraige, she reaches his wedding place and asks how come he is going to marry someone else though the city knows about their relationship and makes a taunt. Ashish informs that she is speaking nonsense. She reminds him on what he said just while back that they hold hands and shared nice moments and have much fun. She reminds that he forgot to tell about his engagement to her that time. It was just 10 days back and makes another taunt that they went on a hot date. He speaks that nothing has happened and blurts out the truth of trying to touch her which resulted in her going away. She informs all whether everyone believes her now and speaks of going with him then as she regarded him as a friend. She admits on wearing short clothes for magazine and modeling but doesn’t want people to judge her. She speaks of not having any shame since she does hardwork and honest in her work. Megha points out that boys like him needs to be corrected who thinks girls in a bad way. She reminds them to forget the assumption on models and instead should know the truth. Megha’s mum Geeta calls her as the pride of her home, and calls her as the Tigress. She hugs her mum with emotions and gets teary eyed. Soon, Megha leaves from there with family and thus said Halla Bol to show that girls are not lesser than anyone [Ladkiyan kam Nahi]. The story ends on that note.

Karan speaks that modeling and acting is done by dedication and its like other profession with the person associated with it is also a person and an individual. He suggests passing comments and personal judgements on someone and calling them as characterless is wrong. Karan points out that Megha has informed the society about their dual standards and has proved herself right. Karan signs off by asking the girls to have dreams and to not be quiet since they are not lesser than anyone [Ladkiyan Kam Nahi in hindi].

* Megha is played by actress Neelam Sivia
– Neelam is a model and actress originally from Denmark coming from an Indian family.
– She did modeling assignments in Denmark and did print Ads there. She did modeling and print Ads with UTV Bindass and other agencies in India.
– Portrayed the role of Anika – Anushka Sarkar’s daughter in Sony TV’s show Kya Hua Tera Vaada.
– Neelam portrayed the role of Sonia in Ishq Kills 6th Episode telecast on 23rd March 2014. Recently, she worked in Bindass’ Love By Chance 23rd Episode telecast on 1st November 2014, and portrayed the role of Sheetal.
– Follow the tag Neelam Sivia Actress to read articles written on the episodes where she worked.