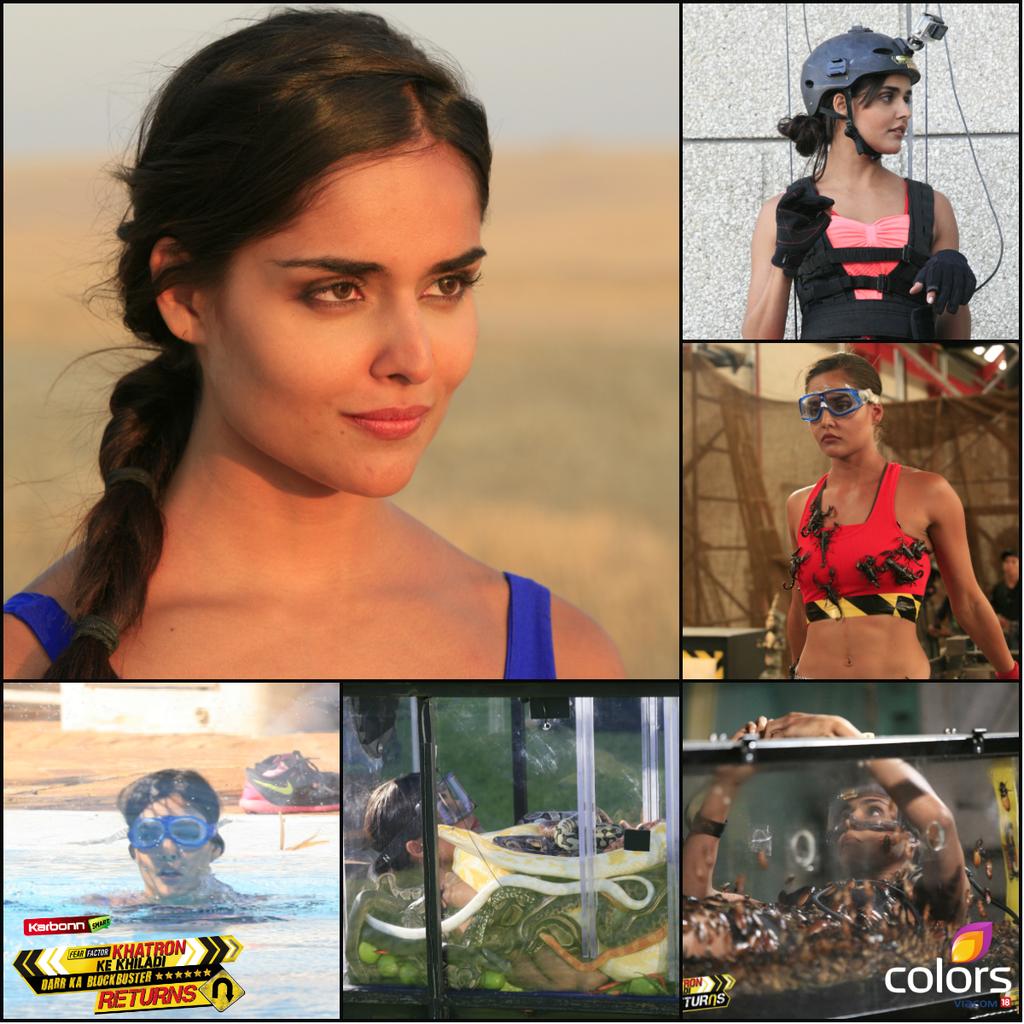 Khatron ke Khiladi Darr Ka Blockbuster Returns [KKK 6] is in the seventh week on Colors TV. Rohit speaks that all the stunts are performed under expert supervision with training and safety in place, and should not be tried. This week is the Jodi Special and stunts are performed with partners. The Elimination day arrived and first Ashish & Hussain camaraderie was shown. Rohit (the host, mentor) asks Hussain about Ashish’s first movie Qayamat’s release date. Hussain pulls Ashish’s leg and Rohit gives the answer himself – the year 2003. Rohit then asks Ashish to spell Hussain’s surname but he couldn’t do well. Hussain spells his surname well. Nandish & Rashami were next to talk next. Nandish says she speaks a lot and that is her irritating habit. Rashami speaks of Nandish wanted to become actor however he contradicts and speaks of his wish to become fighter pilot.

There will be 2 stunts and 3 Jodis perform in each. The best performer earn 5 points, 2nd best performer: 3 pts, and 3rd one: 0 pts and Rohit asks the Khiladis to convert their yesterday’s failure into victory.

One partner will be standing on a platform on the car and moving the lever to manage the other partner’s movement. The second partner is lying on a slider attached to car and moving with it in its direction. Moreover, he/she will be drifted to reach the approaching moving truck so as to fetch the flags attached to the truck’s front platform. Once the second partner collect those 2 flags, the first partner needs to pull him back by rotating the lever in opposite direction so that second one reaches the car. The first partner after collecting those flags need to attach them on the car’s bonnet thereby completing the stunt.

* Natalia & Meiyang
Natalia takes the car partner role – first partner, and tries to loosen the rope so that Meiyang can reach the truck’s platform to fetch the flags. She puts much strength and efforts in moving Meiyang towards the truck’s platform and pulling him back. Finally, Natalia gets the flags from him, and completes her stunt.

* Asha & Rakesh
Rakesh takes the role of car partner and moves the lever well to push Asha towards the truck. He puts consistent efforts and completes the stunt well.

* Hussain & Ashish
Ashish becomes the car partner and puts strength and efforts during his stunt with Hussain.

2nd STUNT: Double Decker, Location: Oberg
To provide some info on the stunt, Rohit asks them to choose friends but before check whether they have strong shoulders. Sagarika & Iqbal, Nandish & Rasdhami, Sana & Salman are the partner sets. Ashish passes a comment on how Salman changed his walking style after becoming partner with Sana.

There is an aerial platform with one partner standing (male), and the second partner (female) standing on the shoulders of first partner. She needs to collect the flags from the platform and moving across to the other end of the platform while collecting them. Balancing is the key in this stunt for both partners. The ordering is decided by a race with partners lifting their companion and running some distance. This brought some laughs with Sana clinging to Salman when he lift her. Also Ashish & Hussain lifting girls [Padma & Sadma] after they only brought the topic.

Sagarika stands on Iqbal’s shoulders and collects one flag. Soon, Sagarika loses balance and it leads to Iqbal losing his balance and both fell. Sagarika speaks of having problem in coordination and also lost her grip.

* Rashami & Nandish
Rashami collects couple of flags and soon feels loosing her balance. She feels stuck to Nandish but takes some more flags. She motivates him during the stunt while collecting flags. After a while, She first falls off and soon he also fell. After the stunt, Nandish spoke of being pushed at the back and also reminds there were no hooks or grip and only toucging glass.

* Sana & Salman
Sana starts her stunt and collects one flag and tells Salman to move slowly. He follows her suggestions well and with their coordiantion they reach the midway and she even does prayers. She completes her stunt by reaching the other end of platform and collecting one less flag than the total.

The contestant will be lying down in a glass chamber and there will be 500-scorpions [bichchoo] put across his/her body. Next, the contestant need to operate a lever using joystick button to control the movements. He/She needs to shift the scorpios with the paw operated with lever to another section above their head. The stunt tests how well the contestant uses the joystick in moving the scorpions while keeping calm.

* Natalia
The scorpions are all across her body and initially she gets not so comfortable. She uses the lever & joystick to transfer the scorpios one by one and completes her stunt. After the stunt, she breaks down after getting many bites and spoke of having difficulty to grab the scorpions.

* Meiyang
He gets couple of scorpions in the first attempt and does his stunt slowly with calmness. Rohit compliments him on doing well.

* Iqbal
Some scorpio move across his face and Iqbal starts off well. He does well but misses to collect few of them as well. Finally, collects the scorpio from his head for the last one before timeout. After the stunt, he speaks of getting bitten by many scorpions.

* Sagarika
She was bit cautious at the start. Salman guides her in moving the joystick but she couldn’t do well and panics but nevertheless transfers few scorpions. Rohit after the stunt speaks that she got panicked. and she gives the excuse of having  problems in managing the joystick.

Elimination Result: Iqbal collected 7 scorpions,  Meiyang: 6, Sagarika: 5  & Natalia: 3; Natalia gets eliminated from KKK6, and she speaks of having pain. Rohit informs to all that she was doing very well and even boys couldn’t have matched her ability, and compliments she is very strong. Rohit gives a surprise with his twist that instead of Sagarika [2nd weak performer], Salman will leave the show. He informs that Salman was brought to give Khiladis a Jhatka [shock] and to inform them on putting best efforts. Thus, Natalia and Salman are eliminated.

Salman gives a gift before leaving with his dance performance on Indiawaale song and soon Khiladis follow him. Salman also reveals the Ticket to Finale. Rohit speaks that next week, he will disclose on who will get that ticket & why, when,  and the one getting into will get direct entry into the finale week. Salman bids adieu after his guest appearance on the show.

* Macho moment: Ashish’s car stunt in putting much strength and efforts to rotate the lever.

– Fun Banter: Rohit talks about voiceover [VO] and expressions, and Hussain enacts the expressions with Rohit giving the voiceover with the dialogue – We will have a kid by the time they reach Mumbai from Capetown bringing some laughs.

– Stunts: Rakesh gets a shock while he was performing his stunt. A fox bites a Khiladi during the stunt.