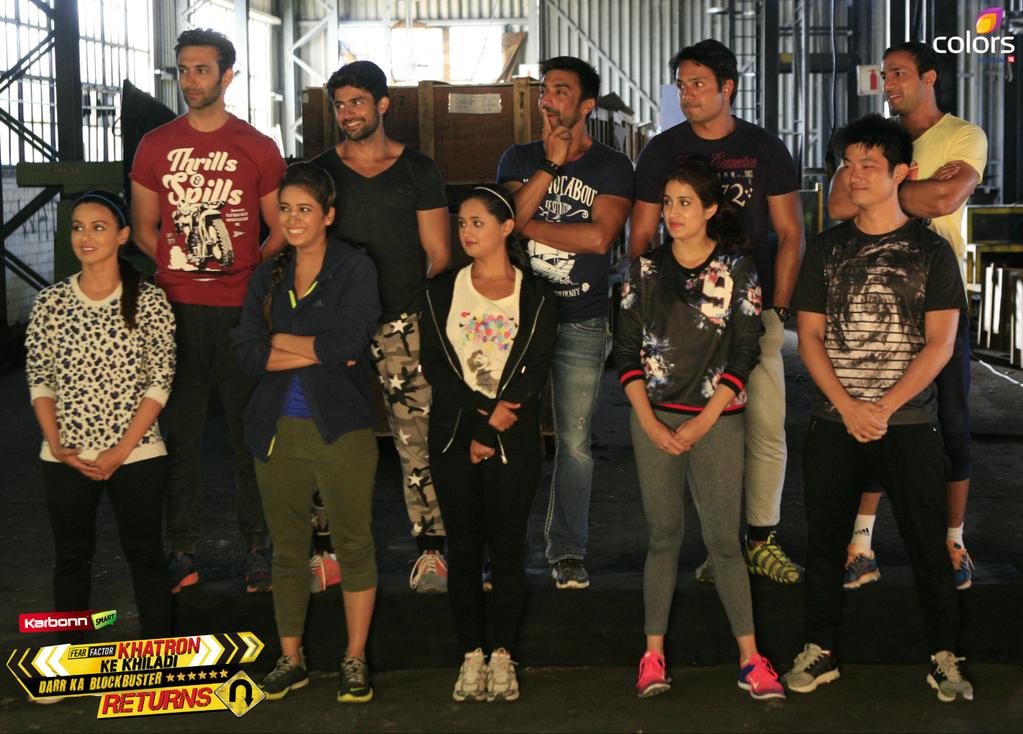 Khatron ke Khiladi Darr Ka Blockbuster Returns [KKK 6] is in the 8th week on Colors TV. Rohit speaks that all the stunts are performed under expert supervision with training and safety in place, and should not be tried. This week is the Ticket to Finale Special. No one will get fear Fundas and there will be no elimination. However, for the ticket to finale, Khiladis will be chosen this week and the ones taking part has to be perform 3 stunts. 2 Best performers will win the ticket to finale, and will be known tomorrow. Rakesh thinks Ashish can reach the finale and informs to Rohit who asked him.

1st STUNT: Height Ki Night, Location: Sunbel building, 18th Floor Terrace
The contestant need to collect 7 flags while crawling and moving across a semi-circular narrow tube at that height. It is an aerial stunt and the contestant need to stick the 7th flag to the pole which is near the end of the tube.  The stunt time is 10 mins and Asha, Rashami and Sana are the chosen Khiladis.

* Asha
Asha crawls slowly while lying down on the tube and collects the first flag. One of the hooked flags fall down. She inches closer and collects more flags and balances her body well after reaching the midway. She has some quiet moments but nevertheless completes her stunt by hooking the 7th flag to the pole.

* Rashami
Rashami crawls and gets the 1st flag. She reaches the midway gradually by pushing forward and completes her stunt well.

* Sana
Rohit asks Sana to remove the fears and perform the stunt. Sana starts the stunt and informs Rohit on not able to lie down. Rohit gives her encouragement and she then pushes forward to crawl. She gets composure after reaching midway and completes her stunt. After the stunt, Sana speaks on lighter note of putting life to complete the stunt and thanks Rohit for motivation.

2nd STUNT: Dabba Gul, Location: Jan Van Reebeck school
Fun banter – Hussain enacts his expression while Rohit does the voice over. Rohit pulls Hussain’s leg on his bonding with Ashish and humorously suggests they will have a baby before reaching Mumbai from Capetown. The stunts will be performed in Jodi’s (partners) but the twist is that each partner will compete against the other.

The contestants are in glass tube and they need to open a lock using 3 keys. The box will open and the contestant need to pull the lever to let the glass platform’s bottom open and make a fall in water. Inside the water, there are 2 platforms where the contestant needs to walk while pushing weights and cover the platform. Once completing the walk, they need to swim to reach the pool’s end and hit the bell there to complete the stunt.

* Ashish vs. Sagarika
Sagarika opens the lock first and falls inside the pool and after a while Ashish dives in water. Sagarika walks on the platform by pushing the weights and comes out first by hits the bell to complete her stunt. After the stunt, Ashish speaks of having problem in opening the lock.

* Hussain vs. Nandish
Nandish dives in water first and Hussain falls after some time and had problems in opening the lock.  Nandish walks fast on the platform with weights but also slips and overcomes it. He emerges out of the pool and completes his stunt first.

Result: Hussain and Ashish out of the race to ticket to finale. After Ashish’s not winning the best performer, Hussain predicted he will also have the same fate and it came true.

The contestant needs to find 5 keys with the clue of paint boxes. He will be hitting with paint balls during that part of the stunt. After getting the keys, he needs to go inside a small tunnel to unlock a box with one key out of 5 keys will work to open it. Pepper spray will be blown here, and he will get a code from the box with 5 digits. Next, he needs to open a locker in 10 seconds with that code otherwise he will recieve shocks. Once opening the locker, pressing the horn to complete the stunt. Iqbal & Rakesh were sent out when Meiyang perform the stunt, and they didn’t see.

* Meiyang
Meiyang start his stunt and gets hit by paint ball while he searches for keys in the boxes. After several hits, he collects 5 keys and gets the code by opening the box in the tunnel. Finally, he opens the locker with code and press the horn. After the stunt, he got several bruises and speaks of getting stuck for few seconds though the code was infront of his eyes. Luck favored him as in few seconds he opened the box with code.

* Rakesh
He gets hit but keeps focus on searching for keys at the boxes and starts getting one by one. Soon, he gets 5 keys and quickly unlocks the box to get the code. For the final leg, he gets couple of shocks but soon completes his stunt. He terms this stunt as the most difficult. Rohit informs him on getting time penalty as he had went inside the tunnel with helmet.

* Iqbal
Iqbal gets first key and got hits already. Soon, frustration gets to Iqbal and he hits the boxes on not finding key. He gets the code after opening the box. Finally, he completes the stunt but got couple of shocks. After the stunt, he speaks of getting 4 keys. and luckily opened the box with them. He speaks of his mind was not there and somewhere else and breaks down. Rohit hugs Iqbal after understanding his situatoon and soon Iqbal starts to cry more and get tears. Rohit advices that everyone has problems and suggests him to not let them come in his work.

Khiladis competing for Ticket to Finale Race: Asha, Rashami,  Sagarika, Nandish, Meiyang, Rakesh, and they will have another stunt tomorrow before the Ticket to Finale stunt to decide the khiladis getting the ticket.

Tomorrow [Next Episode]: There is a stunt with Hyena who is going to bite the contestant and is very dangerous animal. Some Fun banter with Meiyang singing the Lungi dance mashup alongwith his fellow Khiladis. Nandish breaking down in under water stunt for the ticket to finale.