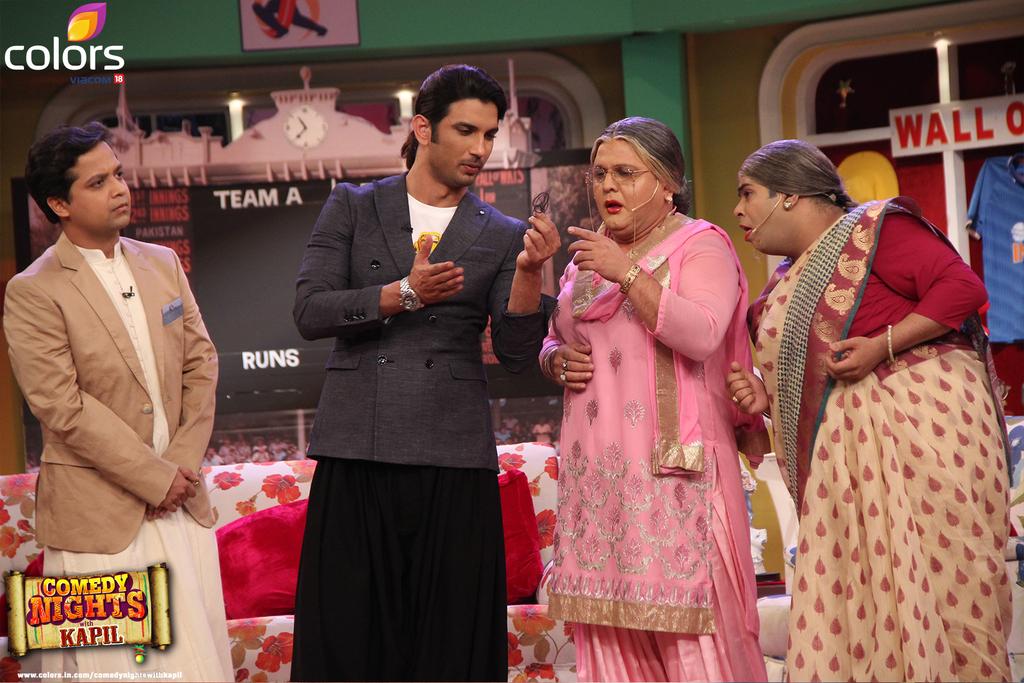 There is Cricket Fever Special this week on Comedy Nights. Kapil comes in the character of Sittu – Bittu’s mischievous brother, and comes as a cricketer and shares an anecdote on how he tried to threaten a fellow cricketer during his younger days but instead got hit in return and has memories about it. He informs Siddhu on inviting duplicates of Sachin, Inzamam, and even of him. Paresh takes the role of Sachin, another actor takes role as Intazam (based on Inzamam Ul Haq), and Sunil Grover takes the role of Siddhu. They all come one by one and meets Sittu. Sunil Grover as Siddhu follows the mannerisms of his character and one-liners and suggests that dialogues are fictional, and in the finishing line changes the Taali (clap) to Jaali (net) to be creative. Sittu himself first divides the team by taking Siddhu’s character in his team while Paresh (Sachin) & another actor (Intazam) are in other team.

Moreover, Sittu declares himself the captain of both iteam which is not plausible but still sticks to it. Sittu’s team – Thoka Taali and Sachin’s team – comedy night writers. Next, Intazam prepares for the toss and asks for Head or Tail, and Sittu asks for Kadi Chawal, Siddhu asks for Makki ki Roti (made of cornflour, 12 nos) + Sarson da saag with lot of cheese. Intazam informs Siddhu’s character that he is not running a food Langar there which is a taunt. Nevertheless, the toss is realized, and Siddhu changes his tone from only listening to God to accepting the outcome of the toss – Head. Sittu and all go in a dancing spree with some cheerleaders (girls) giving them good company. Sugandha is also present and ready to sing during those celebrations.

Kapil welcomes Sushant by introducing him as Detective Byomkesh Bakshy and also welcomes actor Anand Tiwari (Ajit Babu character in movie). Bittu asks Sushant whether his girlfriend keeps an eye on him and has caught him once. Sushant shares an anecdote of present in Delhi and went to a beach theme party and was attending alongwith a director. He wore garlands and carried beach look at the party scene. He came back to Mumbai and his GF (Ankita) showed him the newspaper articles of him seen in beach attire and with less clothes and inquired about it invoking laughter. Daadi and Pankhudi Aunty mark their entry and within no time start confrontation which change into fight.

Sushant mediates their fight and shifts the focus on dance on the song – Calcutta Kiss from his movie. Soon, Daadi and Pankhudi aunty groove and dance with Sushant with much energy, and Sushant following Daadi’s trademark dance step of stretching legs in rhythm. Sushant also showers a suprise for Daadi which makes her and Pankhudi aunty much surprised. There are some more fun moments on the show with Sushant sharing anecdotes from his experiences and having good time. Stay tuned to Comedy Nights on Colors TV.