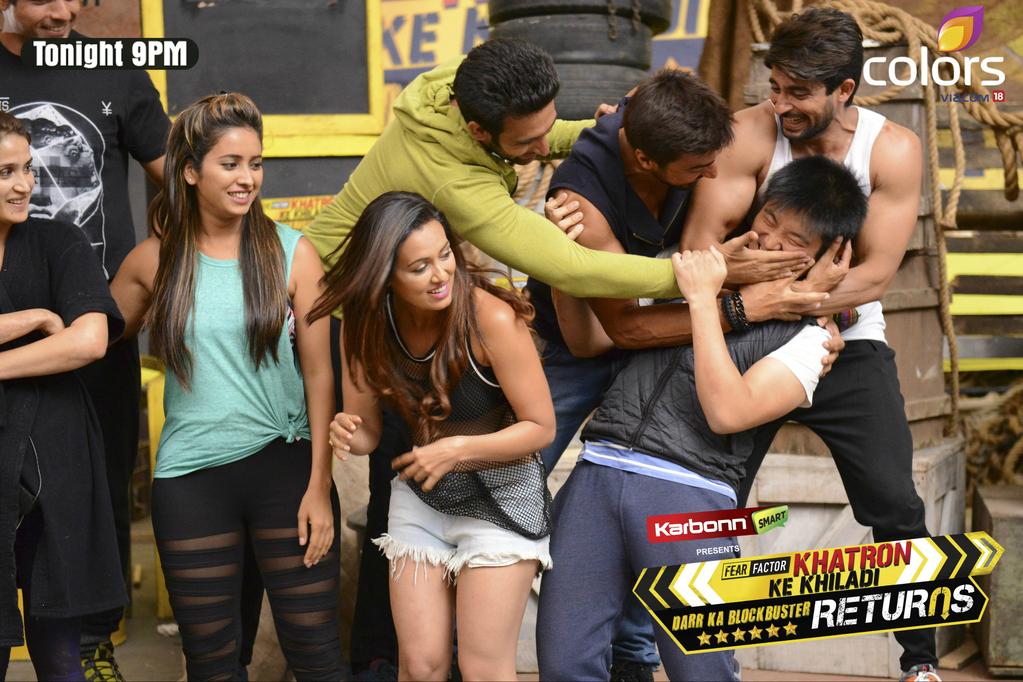 Khatron Ke Khiladi Darr Ka Blockbuster Returns [KKK 6] is in the 8th week on Colors TV. Rohit speaks that all the stunts are performed under expert supervision with training and safety in place, and should not be tried. This week is the Ticket to Finale Special  and one winner will emerge out as the first finalist. No one will get fear Fundas and there will be no elimination. The first stunt will be performed in partners. Rakesh & Asha, Rashami & Meiyang.

1st STUNT: Kheecha Pani [As flags need to be pulled/release from water]
The first contestant will be hanging down upside down at one place while the other contestant is hanging much higher in air. The first one needs to open 6 screws to retrieve the hacksaw (Axo) blade in order to cut the rope. Once the rope is cut, the first contestant will go up with pulley pull while the other partner go and dive inside the water tank. The second partner then need to release the flags attached to the buoys inside the tank while holding the breath.

* Asha & Rakesh
Asha opens the screws in quick time and retrieves the exo blade. She manages to cut the rope followed by Rakesh making dive in the tank. Rakesh signals after releasing few flags since he couldn’t hold on to breath any longer, and and comes out to complete the stunt.

* Rashami & Meiyang
Rashami loses her balance a bit but soon cuts the rope. Meiyang dives in water and removes all the flags from the buoys and holds on his breath for that time. After the stunt, Meiyang speaks of having panic initially for first seconds. Rohit compliments him.

The contestant is tied with weights and will dive in water after the platform opens up. He/She will not be able to come up as they are having weights. First, need to unlock the lock one by one and there are 2 locks to the weights chain. They then need to release 3 flags attached to buoys. Some Fun banter followed after stunt info: Meiyang sings the Lungi dance mash-up with fellow Khiladis joining in with their hand moves. They cheer Sagarika who has some back and chest injury bringing smiles on her and everyone’s face.

* Sagarika
Sagarika dives in water and unlocks the first lock and come out to take breath, and soon unlocks both of them. She releases all the buoys in one breath and completes her stunt in quick time. Rohit compliments Sagarika on her efforts. Rohit knows Sagarika is a national level athlete and understands Ashish pulling her leg by calling her as a national level swimmer.

* Nandish
Nandish speaks of not being a good swimmer. He opens the lock but loses the key after opening the first lock, and the key moves away from the thread and falls on the under water platform. Nandish opts to abort his stunt midway. After the stunt, he speaks on having breathing problem.

Result: Sagarika goes to perform in the Ticket to Finale stunt.

Rohit speaks of a Jungle Safari for 3 Khiladis – Meiyang, Rashami and Sagarika and the winner will get the Ticket to Finale and get a direct entry in the finale weekend and become the 1st finalist. There is some fun banter with Ashish and Sana, and Asha doing the Mithun da style Kabbadi. Rakesh brings smile on Sana and everyone’s face by his instantaneous tingling on her armpit. Rohit gets a laugh. Rohit informs that Endurance, Strength, Will power is needed for this stunt as it is both lengthy, cumbersome and tests those qualities of a Khiladi. He calls it as the most difficult stunt on the show until that time. The stunt resembles obstacle training and on similar style like that of Parkour but in a forest set-up.

The contestant need to climb down the ladder by going inside a pipe and reach the water tank filled with snakes. He/She need to collect 2 flags there. Then need to pass through the tyres set-up and collect flags. After passing couple of obstacles, need to climb come a net with robes entangled and flags need to be collected there. Then pass through the muddy area with wood planks, and they need to pass beneath those planks. Next, pass in the forest (jungle) where there will be snakes in large quantity and collect flags. Finally, going into an enclosure where there is a tank with lizards and need to collect the final flag. In that enclosure, they need to evade a dangerous Hyena, who can tear apart bones with attack. The stunt will be completed once the contestant deposits all the flags in a box outside the enclosure. The stunt time is 15 mins and the one taking less time is the Winner. The ordering is decided by other Khiladis. Meiyang go first, then Rashami and finally Sagarika.

* Meiyang
For the first leg, he collects the flag from tanks in quick time and pass through the tyres to reach the net while collecting flags. He crosses the mud to reach the jungle and collects the flags there and retrieves the one he had dropped. He reaches the enclosure where Hyena bites him. But nevertheless, he keeps spirit high and collects the last flag. He deposits all flags to complete the stunt. He gets treatment for the bite, and hopes he will be fine.

* Rashami
Rashami panics in the water tank just at the onset but Rohit calms her down. She pushes hard to pass through the tyre after getting composure.  She completes the remaining obstacles well and shows agility in crossing the muddy area with wood planks. She gets afraid after seeing the Hyena in the enclosure but manages to escape. She deposits all flags to complete her stunt. After the stunt, she thinks the stunt would be a piece of cake for Sagarika.

* Sagarika
Within some time, she gets flags from water tanks and moves fast across the tyres. She maintains good speed in passing all her obstacles and collects flags in the net where she looses her balance but controls herself. She quickly pass through the muddy water and wood planks to reach the jungle. She escapes the Hyena to collect the last flag and soon completes her stunt.

Ticket to Finale Result: Meiyang Chang wins the ticket to Finale from Rohit. Rashami: 11 min 44 seconds & 13 flags, Meiyang: 5 min 53 seconds, Sagarika: 7 min 26 seconds. Meiyang gets direct entry into the final week. Hussain recollects on how Meiyang was nervous at the onset but now he is the first finalist. Rohit speaks that always the most unexpected Khiladi becomes the finalist.

Next Week: KKK 6 is in the 9th week and thus the Semi-finale week where finalists are going to be decided. There is going to be helicopter, car, water based stunts. Rohit informs on having 2 eliminations. Rohit pulls the leg of Nandish & Ashish while telling the former to be not oversmart, and telling the latter to not take his words lightly. He asks Ashish to leave but eventually going to show his fun persona after pulling off the prank on them.