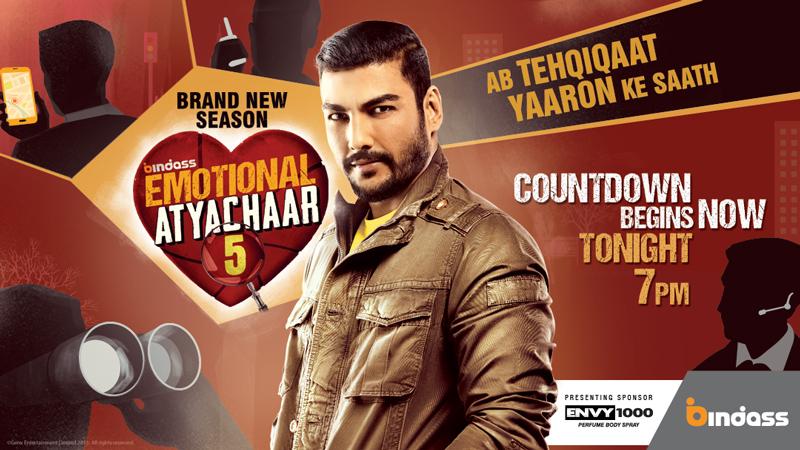 Pravesh Rana (the host) speaks of bringing out the bitter truth in relationships so that you come out of the atyachaar (torture) of cheating. He talks about the shows 4 seasons, and understands that the cheaters are getting smarter. So, what are the odds to outdo the cheaters and expose them. Pravesh speaks what-if your partner goes away/disappear suddenly leaving behind many questions. Today’s story is about Donna. Donna comes on the studio with her friend Yukti. Donna is a professional tarot reader who even read the cards online of her clients and speaks of interests in astrology, supernatural world. She is having a friendship with Yukti since 7 years from their college days. Yukti speaks to Pravesh on working as a HR at a software company. Donna  shares her story on how she met a boy Nitin on a dating site and eventually she was in a relationship with him. Things were fine between them and suddenly one day he disappeared from her life.

The story starts with actors portraying (or replaying) Donna’s real-life event. Donna calls to Yukti and informs that something might have happened to Nitin. Yukti doesn’t take it seriouly initially and soon learns Nitin is missing. Donna tells Yukti to come at her place since she didn’t got help from police yet. Donna later reminisces past moments he shared with Nitin, and how he gave promise on not hurting her.

Studio: Donna shares with Pravesh that she spoke about Nitin to her mom since her relationship with him has grown much. Her mom was circumspect about Nitin and wanted her to have the responsibility on whatever be the result of her relationship. Yukti talks about Anurag who is like her brother and she went to him for help.

Yukti  asks Anurag to drop her to Donna’s place but he doesn’t give favorable reply and doesn’t care to listen. When she talks about going to Donna, he readily agrees to drop her.

Studio: Pravesh pulls the leg of Anurag who comes there and asks whether he regard Donna as his friend.

Later, Anurag and Yukti meet Donna who informs them on not getting connected to Nitin since two weeks and thus she is much worried. Donna speaks of meeting Nitin for the first time three months ago at a dating site. Yukti learns Donna doesn’t know his relatives and also he didn’t went away after getting bored. She wants to help Donna and gets a shock on learning that Donna doesn’t have any photo of Nitin whatsoever. Donna speaks of only knowing Nitin’s home at some society since past 3 years since she used to visit him there during their relationship period.

Studio: Yukti is puzzled on why Nitin took Donna to his home if he wanted to disappear suddenly after some time.

Yukti takes help of Anurag to enter Nitin’s home and even resorts to bullying so that he goes there. Donna comes up with a plan at first to distract the security guard at Nitin’s society building by breaking the glass so that he will follow her and Anurag can go inside. Yukti rejects the plan  since the guard is young and can get hold of her in quick time. Yukti then suggests Donna to carry some bags so as to distract the security guard and asks him for his help. Donna acts on Yukti’s plan and goes with shopping bags but to her surprise there is a change in security guard due to time shift. An old security guard replaced the younger one so she changes her plan and breaks the glass instead and runs. Meanwhile, Anurag enters the society’s building in that time and tries to unlock Nitin’s flat. He is interruped by the lady there and he gets nervous. Yukti guides him in speaking some words and he convinces the lady of being a courier boy and even she was a new occupant there so he was able to evade her.

Anurag unlocks the door and finds spider webs inside and soon discovers blood spots in Nitin’s bathroom. He is connected with Yukti on phone who suggests blood spot doesn’t say anything. Anurag then gives her an idea of knowing about Nitin from the society’s chairman and she agrees. Anurag informed Yukti that she will go this time to meet chairman. She meets him and asks about Nitin Khurana and introduces herself of coming from a telecom company and talks about Nitin having some dues. The chairman speaks that Nitin had died four months ago and thus  he cannot help her. He informs that Nitin died on spot after slipping and falling down on the bathroom floor. Yukti is in shock and asks the chairman to give him the contract agreement of Nitin. He informs the file is not present and is with his staff who at present is out of city.

Studio: Pravesh is worried. Anurag speaks on feeling like wild Goose chase when they were on the lookout for Nitin.

Yukti and Anurag come to Donna’s home and informs her that Nitin Khurana died 4 months ago and she learnt it after meeting society’s chairman. Donna starts to cry and couldn’t comprehend. She thinks whether she was dating an Aatma (soul).

Studio: Donna speaks of communicating with souls as part of her work.

Donna started doing her meditation and recollects past moments that she shared with Nitin at the night club and gets a hint. She then calls Yukti and informs of being drunk one night when she went with Nitin to a night club one month ago. Donna thinks the bartender will help them as she found him having a good talk with Nitin and also waived off the drink amount since Nitin forgot his wallet.

Studio: Pravesh asks whether the bartender is a human and he asked about it because Donna earlier spoke of communicating with souls.

Later, Yukti and Donna goes to the same night club and meets the bartender. Yukti asks him about Nitin Khurana and he replies on not knowing him. Donna is in shock since even after she reminded him about coming there a month ago he still doesn’t know about Nitin. Yukti supports Donna and speaks it not a dead end after finding CCTV cameras there. She goes out with them and wants to get the CCTV archives and wants Anurag’s help to distract the bouncers. He reluctantly agrees to Yukti and goes ahead to hit the cars so as to generate the automatic theft alarm. Meanwhile, Donna and Yukti enter the CCTV archive room when the bouncers are away. Yukti starts looking at archives there and learns about 1st October at 10 pm which was the day when Donna went with Nitin. Yukti finds the footage of Nitin with Donna, and he is seen talking with ease with the bartender. Anurag calls them to leave as bouncers are returning back and both manage to escape in time.

Yukti and her friends come to the bartender and she asks why he lied on not knowing Nitin. She shows him the pic of Nitin seen at the bar. The bartender recognizes Nitin but as Rahul Bisht. Donna gets a shock to know that the one she was thinking as Nitin is actually some other person Rahul Bisht.

Studio: Soon, they want to know who is the real Nitin Khurana. Yukti goes to the chairman’s office and discovers that the real Nitin is completely different from Rahul Bisht.

Yukti comes back and informs Donna that Nitin is actually Rahul Bisht. Moreover, Rahul knew that Nitin was dead and thought he won’t get tracked down once his trickery comes out. Yukti then finds out on how Rahul got the info on Nitin’s death. She found the obituary of Nitin Khurana on the Internet where all his info was present. Rahul used that info to take Nitin’s identity and cheated Donna.

Studio: Donna was not getting leads about Rahul and one month passed by. One day, Donna gets a call from the same bartender who informed them to come at the night club since Rahul was there.

Donna reaches the club with her friends to find Rahul. She sees him with a girl and reminisces the moments she shared with him. She goes on to slap him hard and the girl with him intervenes and calls him Tanmay. Donna informs her that Rahul took the identity of a dead man Nitin for 3 months for his cheating and also to not let himself tracked down. Rahul bursts out and admits on taking the identity of the deceased Nitin Khurana. He reminds Donna on  changing his plan because she was eager to tell her mom about their relationship and he didn’t wanted such a thing. Rahul tries to touch Donna and Anurag punches him hard. Yukti confronts Rahul and speaks of not giving a damn since his real identity is now known to all as she has uploaded his identity and fake identities’ truth on social media. She reminds that from now on he will not be able to give deceit to any girl and leaves with Donna & Anurag. Donna’s story ends on that note.

Studio, Signing Off: Donna gets teary eyed and Yukti informs that Donna hasn’t moved on completely until now. Donna speaks of not able to solve the mystery if her friends weren’t there. Anurag speaks of the lesson which everyone can learn. He suggests that once you progress much ahead in relationship and intimacy, it is much better to have a thorough background check of your partner – basic credentials, asks about family and get involved with them. Pravesh thanks them for coming on his show and sharing their story.