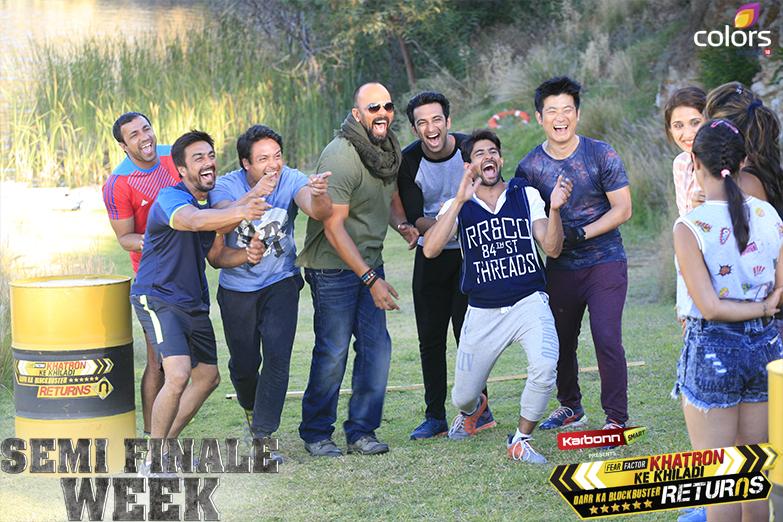 Khatron Ke Khiladi Darr Ka Blockbuster Returns [KKK 6] is in the 9th week – Semifinale Week on Colors TV. Rohit speaks that all the stunts are performed under expert supervision with training and safety in place, and should not be tried. There will be 2 eliminations this week and also no fear fundas are given but instead points are given. The ones with the least points get eliminated. In this week, the finalists are decided.

1st STUNT:  Happy Landing.  Location: Bluerock Quarry
There is a platform in the shape of a “+” symbol with four sub-platforms. The first partner sits atop the rotating platform while the second partner is hanging below the platform facing it. The first one need to unlock the second partner’s locks of both hands and legs and also remove the hook. The second partner is able to dive in water henceforth and soon the first partner will also jump. They will swim together to reach the ramp and running on it to reach a place and ring the bell to complete the stunt. In case the first one falls down while unlocking the second partner locks, the stunt gets stopped. Rohit chooses two groups: Nandish-Sana, and Asha-Sagarika. The ordering is decided by tug of war with Sagarika overpowering Sana.

* Sana & Nandish
Nandish quickly unlocks the lock of Sana’s hands quickly and also of legs. Sana makes a dive henceforth, and Nandish waits for a while before realizing the jump. Both swim to reach the ramp and he puts effort to help Sana in climbing the ramp. They walk and pick up speed to run and soon complete the stunt by ringing the bell.

* Sagarika & Asha
Sagarika is tied to the bottom while Asha sits atop. Asha quickly removes the locks from her hands and legs, and the hook. Asha moves smoothly on the platform during the unlocking phase. In the second leg, Sagarika pushes Asha at the ramp and finally completes the stunt. Asha informs Rohit of not knowing swimming much so faced difficulty and lost energy.

2nd STUNT:  Water Fall.  Location: Waterfront
Fun banter with Ashish giving a winning speech to depict scenario of his potential win. He thanks his contestants one by one from Iqbal to Sagarika. He comments on Iqbal not using his muscles on KKK6 and calls Sagarika as water’s angel [Jal Pari], makes a comment on Sana’s make-up, Rashami’s Dhokla (food) eating and Asha’s getting sadness (nirasha) as she is unable to do well in last couple of stunts. Iqbal, Hussain and Rashami are the Khiladis doing the stunt.

There will be individual performances with best one earning  2 pts while the rest 2 will get 0.  There is platform close to mountain cliff and the contestant need to find the flair from 5 boxes placed at the end of the platform. Once getting the ramp, he/she needs to run and make a jump in water while throwing the flare with aim at a container at some distance to have a blast. If they hit the target inside the container then 10 seconds will be subtracted from the total time taken.

* Iqbal
Iqbal is happy to do this stunt. He starts the stunt and finds the flare after some efforts in searching the boxes. He runs and throws the flair after reading the egde of the ramp, and soon makes a dive in water to complete his stunt with the blast. After the stunt, he calls it as the best one of the season.

* Hussain
Hussain shows agility and quickly finds the flare. He runs and throws the flare on the run and simultaneously dives in water. There is a blast as he touches the water. He terms it as the wonderful experience.

Result: Rashami: misses the mark, and took 31 seconds, Iqbal too miss the mark and took 26 seconds; Hussain took 16 seconds while also hitting the target. Also 10 seconds are subtracted from Hussain’s score. Thus, Hussain’s final time is 6 seconds, and wins 2 pts while the rest 2 get 0.

Prank: Rohit asks Nandish why he is having a sarcastic smile. Ashish, Iqbal and Hussain intervene and Rohit tells them to be not oversmart and even pushes Ashish. The girls are shocked to see Rohit’s new avataar and soon Rohit & boys reveal their prank which they pulled off on the girls with ease. Ashish & Rakesh are the Khiladis perfoming the stunt individually.

The contestant needs to land in water by first moving on a cable from a reasonable hilltop. After landing, he needs to enter the boat which is going to take him near a marker and he needs to make a dive there. He needs to hold on to a cable at the water spot which will drag him at some good speed and take close to the ramp platform near the shore. Finally, climbing the ramp and run to reach Rohit. The stunt tests the contestants endurance, concentration and agility.

* Rakesh
Rakesh starts the stunt and does the landing well and soon makes a entry in the boat. He jumps to get hold on cable quickly and soon gets dragged at some good speed in water. He leaves the rope after reaching close to platform and put some more efforts during his run on the ramp. He falters and falls down but quickly gets up to reach Rohit to complete the stunt. Rohit compliments Rakesh on giving a superb performance. Rakesh in turn salutes Rohit for designing the aerial & water stunt.

* Ashish
Ashish knows the stunt is going to test his endurance. He starts the stunt and quickly gets into the boat and sooner then dives near the marker. He looses the rope bit earlier than expected but nevertheless runs quickly to reach the ramp. He has uninterrupted run and manages to touch Rohit in quick time. Ashish speaks of competing with Rakesh was one like he was doing his stunt for the finale.

Tomorrow: Finalists will be decided after all Khiladis going to perform another time. There will be two eliminations. There will be aerial stunt with glass chamber, car stunt with two cars making their move to enter a moving truck – Khiladis doing it, Sana-Rashami, Asha-Hussain and Sagarika-Rakesh. Some Fun banter with Hussain mimicing how Iqbal speaks with fellow Khiladis.