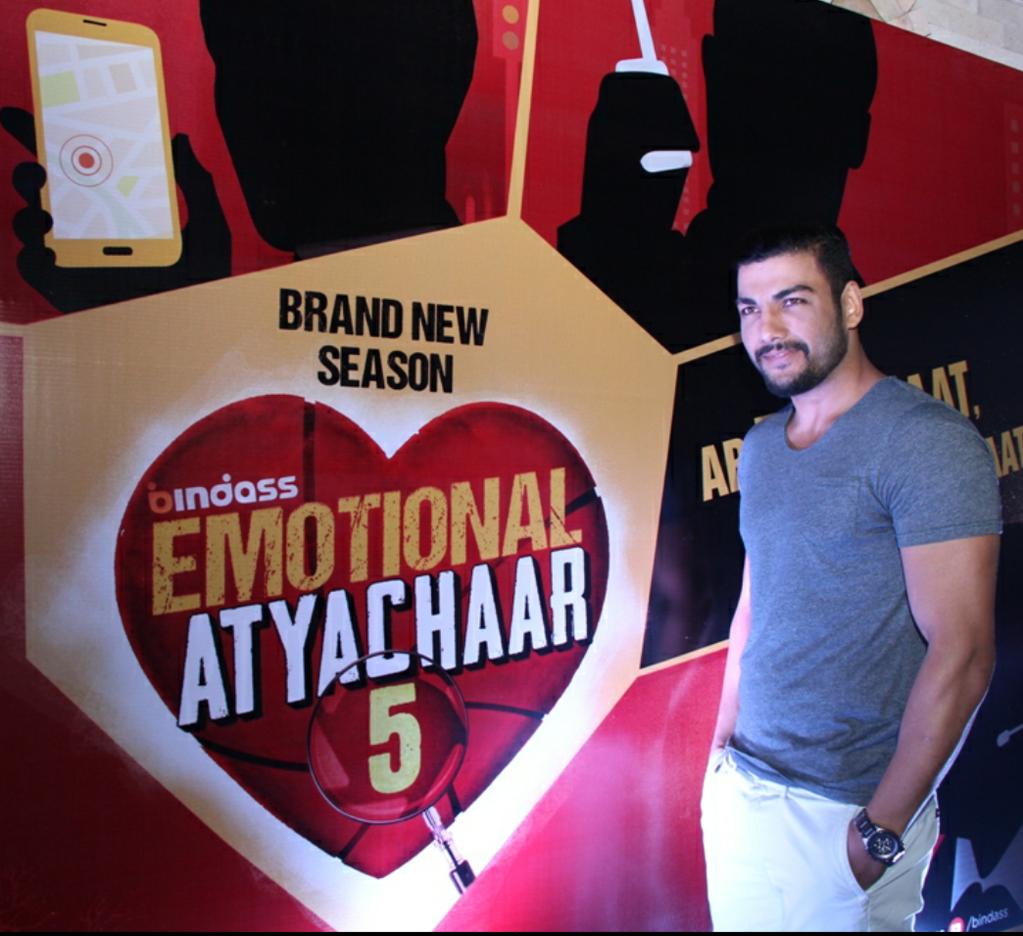 Pravesh Rana (the host) speaks that it is said if friendship lasts longer than seven years then it will remain all your life. But there is no such guarantee when it comes to relationship, it can last 7 days, 7 months or 7 years. Any person can cheat on his/her partner unlike friendship. Today’s story is about Aanchal and how she was cheated by her boyfriend [BF].

Studio: Aanchal comes there and informs on being a Mass media student and keeps interest in media. She had only one relationship and met a very bad boy. She first got introduced via a social chat app. Teejay and Ariana are her friends. She shares her story on the show. She was going in her car and soon got a call about her BF’s accident and soon rushed to hospital while informing the friends – Ariana and TJ to come there.

The story starts with few days earlier than the accident. Farhan is sharing candid moments with Aanchal at home and talks about how a couple met with an accident and he read about it in news. She asks what will be his reaction if something happens to her and suggests he will have other GF just to pull his leg. He fondly calls her Jiya and cannot live without her. She also speaks of loving him and refers to him as puchkin. The story comes back to present, Aanchal comes to the hospital and talks about Farhan at the reception. She learns that there was another person with Farhan at the time of an accident from the receptionist and gets puzzled.

Soon, she meets Farhan with her friends. Farhan gets a hug from Aanchal after asking for it . He speaks of driving normally and suddenly a biker came in front which resulted in the accident with car hitting the road divider. She asks whether he was alone and he replies yes with confidence. She recollects receptionist speaking about a lady present with him and gets a doubt. She then meets her friend Ariana there who comes in the dress of nurse and wore it for the auditions. Aanchal speaks to her friends on her worry and reminds them on how a girl was mentioned to be seen with Farhan after accident. TJ thinks she has to give Farhan benefit of doubt. But she suggests of wanting to know whether Farhan is lying since it is about her life.

Studio: Aanchal speaks of getting teased by her friends with names – Amma, Amma ji, Ammi jaan. Ariana comes there and speaks of being a model and on a lighter note shows her keen interest in doing a movie with Pravesh. Pravesh gets glad with Ariana’s words on that note. Ariana speaks of regarding Farhan as a weird. TJ speaks of Farhan as the one having friendly nature. Aanchal speaks of taking her friends help in knowing about that second person.

Aanchal and friends – Ariana & TJ are in Farhan’s room at hospital and there is Naman – Farhan’s college friend. Arian gets floored with Naman and is in awe of him. Aanchal speaks to Ariana on wanting to check Farhan’s phone and wants her to distract Aman and Farhan by showing audition. Ariana acts on it and takes the fruits bowl to act as nurse and distracts Farhan. Meanwhile, Aanchal takes the phone of Farhan to find a message – Take care, and all other messages are deleted. She notes down the number and it doesn’t have name.

Studio: Aanchal speaks of getting bothered with receptionist’s info on second person, and also message. She learnt about Farhan asking Naman to check about car insurance for his car present in mechanic garage.

Ariana continues to get floored with Naman while he was saying goodbye to Farhan. Sooner then, Aanchal also leaves with TJ and Ariana and informs on following Naman to know in which garage Farhan’s car went. They follow Naman till the garage and then asks Ariana to distract the mechanic and until then she will look into Farhan’s car. She informs TJ to give her signal if there is some problem. Ariana acts on Aanchal’s plans and meets mechanic and talks about having a sound problem, and refers him as brother. Aanchal enters into Farhan’s car to find some evidence.

Studio: Aanchal speaks of not finding anything . The mechanic guy informs Ariana that her car is fine. She then gets worried since Aanchal is still in Farhan’s car. TJ acts and distracts the mechanic so that Aanchal can finish her work. Aanchal found a lipstick in the car. TJ made an elephant sound as form of distraction. He speaks of doing it since childhood and has performed on stage shows by making elephant sound.

Aanchal speaks of finding lipstick to her friends and believes there should have been a girl in Farhan’s car during time of accident. She gets disappointed on that note. Later, Aanchal visits Farhan at the hospital and later Ariana gives an idea of CCTV camera stationed at reception and the footage will give them the answer. Aanchal comes there to find a smoke detector instead of CCTV camera. TJ makes fun of Ariana on being mistaken about CCTV camera.

Studio: TJ gives an idea of receptionist having entries because of registration. If there was a girl with Farhan on accident day her entry will be there.

Aanchal and friends agree with TJ’s idea of checking registration records. TJ speaks of distracting the receptionist by his charm while Ariana is not confident about him. He goes to receptionist and speaks one-liners in order to bring charm. She speaks of having much work and there is no good food in cafeteria. TJ acts emotional and speaks of his mom being admitted there since one week, and moreover he doesn’t have friends and talks about loneliness. He thus came to her to speak and just wants to drink juice to ward off to spend some time. The receptionist girl gets into his emotional words and agrees to accompany him for one juice at the hospital. Aanchal then checks the receptionist computer to find out who registered along with Farhan.

Studio: Aanchal speaks of finding the name – Vinita Iyer in the registration date. Vinita works at Farhan’s NGO office and his junior. She informs Pravesh that Farhan spoke earlier on having crush on Vinita. Aanchal also speaks of teasing him about Vinita and never thought he will be any kind of relationship with Vinita.

Aanchal decides to confront Vinita next morning at her office. Aanchal comes to Vinita’s office and introduces herself as Alisha Seth at reception. Farhan’s boss Sunaina comes there and infroms to receptionist on having an accident recently and thus having hand injury and bandage. Aanchal observes Sunaina closely and soon Vinita comes there to meet her. But Aanchal is still engrossed about Sunaina and soon receives a flash of idea and dials the number which she obtained from Farhan’s phone. Sunaina gets a call after Aanchal’s dial and this confirms to Aanchal that it is Sunaina who messaged Farhan. She gets teary eyed after that revelation.

Studio: Ariana speaks that Aanchal was shattered to know about Sunaina. Aanchal went to the hospital and messaged Sunaina to come there using Farhan’s phone.

Sunaina comes there and Farhan gets shocked to see her there. She informs of coming there as he has messaged her for coming there. Aanchal comes back to Farhan’s room and informs Sunaina on sending the message from Farhan’s phone. Aanchal asks Farhan since how long he is having an affair with Sunaina. Farhan starts speaking on how he got involved in a relationship with Sunaina. One day he attended a dinner party hosted by Sunaina at her home and he was left alone with Sunaina after other invitees left. They got drunk and share intimate moments together. He also speaks of Sunaina’s husband staying most of the times outside. He informs Aanchal on sharing intimate moments with Sunaina on regular basis. At the time of accident, Sunaina was present and both were going to office together after spending the night.

Aanchal slaps him hard and asks why he did such a thing with her. Aanchal cries with tears rollling down while Farhan carries guilt on his face. She informs him of never thought he will do such a thing. She confronts Sunaina on why she has registered as Vinita Iyer at hospital registration. Sunaina opens-up on not wanting to leave her husband and wanted to keep her affair under wraps. Aanchal calls Farhan as number 1 cheat and slaps him hard again. Ariana steps in and promises to reveal Sunaina’s affair to her husband.

Signing Off, Studio: Aanchal speaks of trusting Farhan and learnt about cheating after some considerable time. He was cheating her by having an affair with his boss who is 10 yrs older than him and married. Aanchal speaks of feeling like a dead person from inside after cheating revelation gets known to her. She informs that that without friends she couldn’t have moved on. Pravesh thinks she is lucky to have friends and suggests she is strong from inside and has shown strength to deal a tough situation. He thanks Aanchal & her friends for coming on the show and gives his best wishes.