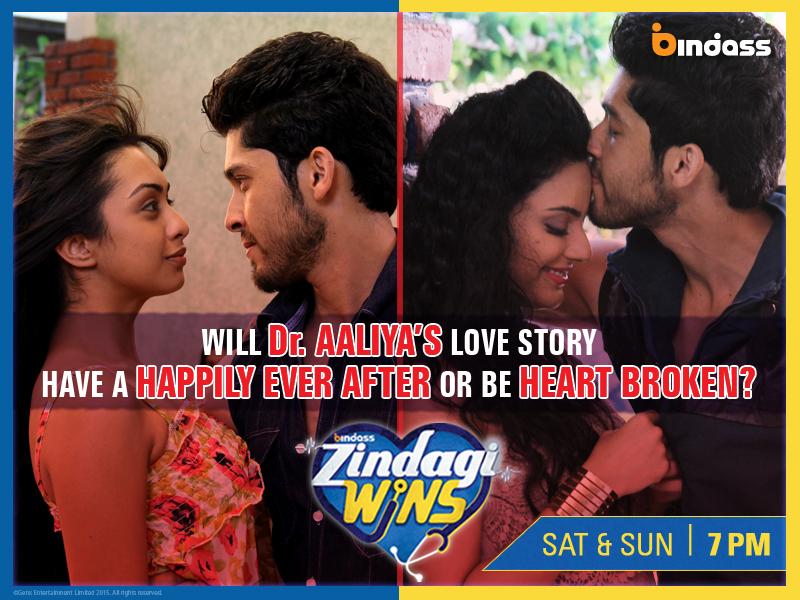 Aaliya is seen at her home and speaks of three stages of problem – Saam, Daam, Dand [from Chanakya’s principles of diplomacy]. She speaks of getting pain (akin dand) in love after being heart broken. Aaliya then decides to dance on music and suggests on being fine to whatever happened in her life. Sarika also comes to dance with her. Sahil comes to inform Sarika about Aaliya was going to propose Ishaan but he accepted malvika’s proposal . Next, Aaliya comes to the hospital and thinks Ishaan as the reminder of her heart break. She bumps into Dr. Veer and spills the drink as she was lost after looking at Ishaan & Malvika together. Aaliya meets the male patient Datta whose leg got amputated. Datta speaks of having stomach pain and shares his story on what happened after his operation for Gangrene. Aaliya learns he doesn’t know much how he got the pain but now he puts blame her for his condition.

Aaliya tries to speak with Veer but he doesn’t answer anything and acts rude. Malvika greets Ishaan there and wants to talk in some time. He speaks of meeting her in an hour. He then finds Aaliya and informs her on having a kiss with Malvika at the resort and doesn’t know whether it was right or wrong. He is confused and asks Aaliya for her help and advice. Usually, he gives advice to his heart but got tired of thinking much. He thinks she will bring a new point of view as she is a girl. She suggests its important what he feels and not what Malvika thinks about him. Aaliya asks him to listen to his heart always and soon gets nervous and leave with an excuse. She gets teary eyed while leaving and also receives his gratitude. Soon after, Dr. Veer is seen attending an accident patient Vikas in general ward. Aaliya comes there and speaks of CT scan.

KD comes there and informs that is a police case and therefore Vikas needs to be shifted to Govt hospital. Aaliya steps in and speaks of Vikas’s critical condition. Veer informs KD on the law which states that in accident case the patient needs to immediately treated. Veer suggests he would think of getting an order to break laws and gets approval on the treatment for Vikas. Veer informs Mariyam to arrange neuro surgeon and also Dr. Vikram. Veer asks Aaliya to inform him when CT reports are ready. After a while, Aaliya learns that one of Datta’s kidneys is not present. She goes to meet Datta’s wife and asks whether he underwent another surgery to ascertain about missing kidney. His wife is worried and Aaliya gives assurance.

KD comes to meet Aaliya and inquires about Datta’s wife being present there. He reminds her that Datta got free operation and now doesn’t want to see him there since he wants a free bed. Aaliya is also told to assist Dr. Veer for Vikas’s treatment by Dr. Sinha. Aaliya comes to meet Vikas and informs his wife that the clot needs to be removed otherwise his life can be in danger and talks about the philosophy of Saam, Daam, Dand. She speaks if he is alive only then he can do something. Vikas’s wife agrees with Aaliya for the surgery, and Aaliya arranges the neuro surgeon henceforth. Aaliya starts recollecting malvika’s proposal to Ishaan last night and walks  to the doctor’s call room instead of OT. She gets nervous to find Veer changing and starts apologizing.

Next, Veer informs her on not doing surgery since she is not having control on her mind as it looks visible since she had wanted to go to OT and came there while looks nervous.  Meanwhile, Ishaan comes to Malvika’s home after work. He speaks of not bringing wine since most of the times wrong things happened when they took wine. At lifebeat, Vikas surgery is completed by Veer and neurosurgeon and Veer makes a taunt at Aaliya who was assigned to just close the valve post surgery. Ishaan asks Malvika what are they celebrating and she replies on celebrating Us. She replies on missing him and he reminds her that she told him on moving on. She speaks of not losing him again and thinks they need to give relationship another chance.

Aaliya at her end learns that Datta has been discharged by KD and gets surprised. Sahil interrupts Aaliya and speaks of liking much to work with Veer. She talks about Datta and found an incision incision mark and sonography report informed that one of his kidney missing. Sahil gets shocked to hear about Datta and thinks they can trust only one person – Dr. Ishaan and it is a risk to meet Dr. Sinha and others. At Malvika’s home, Ishaan asks her to not take him wrong since last time he was really hurt when their relationship ended. She speaks it was her mistake and can be corrected as well.  He asks by repeating the same mistake. She replies that love doesn’t have a format. She asks whether he believes in destiny and luck and reminds him we don’t know about the future but still we take chance. He reminds we don’t take chance blindly.

She asks what his heart says. He speaks of being afraid inside. On that note, she admits on having fear but she still wants to give a chance to their relationship. He says a broken relationship is like incomplete story. And they cannot live with it whole life. The past breakup has its much effect on him, and If they go on to seperate again he will broken very badly beyond repair. She showers an emotional hug and suggests if they manage to hold on to be together then everything will be fine. Aaliya finds a report about Datta and wants to know what treatment led to his kidney being taken. She goes to the polyclinic in disguise with Sahil and carries the get-up of muslim relatives. She wears a Burqa while he puts a beard. Malvika informs Ishaan on making a space for him in her closet, room and also in her life.

Sahil gets worry in his get-up and soon they find a doctor coming and hide beneath a table. She looks at the patient being treated there and he also speaks of having stomach pain. She discovers that Dr. Mukherjee from lifebeat is attending him and makes a conclusion that this patient’s kidney is also seems to be missing since his pain is like that of Datta. Dr. Mukherjee attends a call after checking the patient and speaks of coming to lifebeat hospital. Sahil thinks all the evidence is in the file carried by Dr. Mukherjee and both agree someone from lifebeat is involved in presumably kidney racket. Aaliya calls Ishaan and informs about Datta’s missing kidney and thinks there is a kidney racket. She has seen Dr. Mukherjee at poly clinic and reminds Ishaan on calling him earlier. He thinks she is putting a big accusation on Dr. Mukherjee -a big doctor, and thus she needs to think carefully and not think much.

Ishaan also reminds Dr. Mukherjee having a spotless reputation during his many years of service. He also speaks of trusting her but she needs to back off for a while. Ishaan also opens-up on giving a new chance with Malvika and both he and Malvika agreed for the same. Aaliya gets teary eyed on that note but still congratulates him. He shares his worry on not knowing how far his relationship will go. She speaks of being happy and he suggests her day will also have a happy ending and ends their conversation.  Soon after, Ishaan finds Malvika putting photo frames about them in her room and she comes to give him a hug. He is quiet at first but soon reciprocates the warmth. Aaliya comes to lifebeat hospital and cries while looking at the patient Vikas and his wife sharing a hug. Aaliya goes out to find Dr. Veer seen talking with Dr. Mukherjee. She gets a doubt whether both are involved in the racket. Later, in the night she comes home to find Sarika laughing and wonders why. Sahil learns from her she didn’t spoke with Ishaan about the kidney racket in detail.

Soon, she finds Dr. Veer there and gets annoyed with Sahil to bring Veer over there. She informs on not caring whether KD gives Veer home or not. On that note,  Veer speaks of staying in her home for some days since hotels are at far distance from lifebeat. He prefers to not stay in hotels since he can use the same traveling time to serve the patiends in need. He is thus staying at her home and asks Sahil to get ready by 5 am for training.  Aaliya wonders whether the file is with Dr. Veer and goes to find out in Veer’s room. She hesitates at first but soon overcomes the guilt feeling to check his bag while he is not around – taking shower. She gets hold of the file but soon encounters Veer the next moment. She tries to evade her actual motive and hesitantly speaks of checking the bag to find dirty clothes. He makes a taunt asking her to join laundry instead of surgery. She hits back by speaking of not trusting anyone.

He makes a taunt that she is not dumb though she looks like one. She says the same about him. He asks her to prepare the breakfast for him in morning and not be late. She leaves while he continue to look at the file in thoughtful way. Aaliya like always every night checks info about her dad and continues to read old news about her dad went missing at LOC. Sooner then, Aaliya receives a call from Ishaan who informs that Dr. Mukherjee is dead. Aaliya is shocked to hear it and speaks to herself on taking oath before becoming a doctor to use her abilities well to help people. She haven’t forgotten that promise and suggests it is her duty now to unearth the people behind illegal kidney racket and stop them. Moreover, its her duty as a person and doctor. Next morning, she is woken up by Sahil who shows her the video of a makeover. She gets excited to have a makeover with Sonam Kapoor.