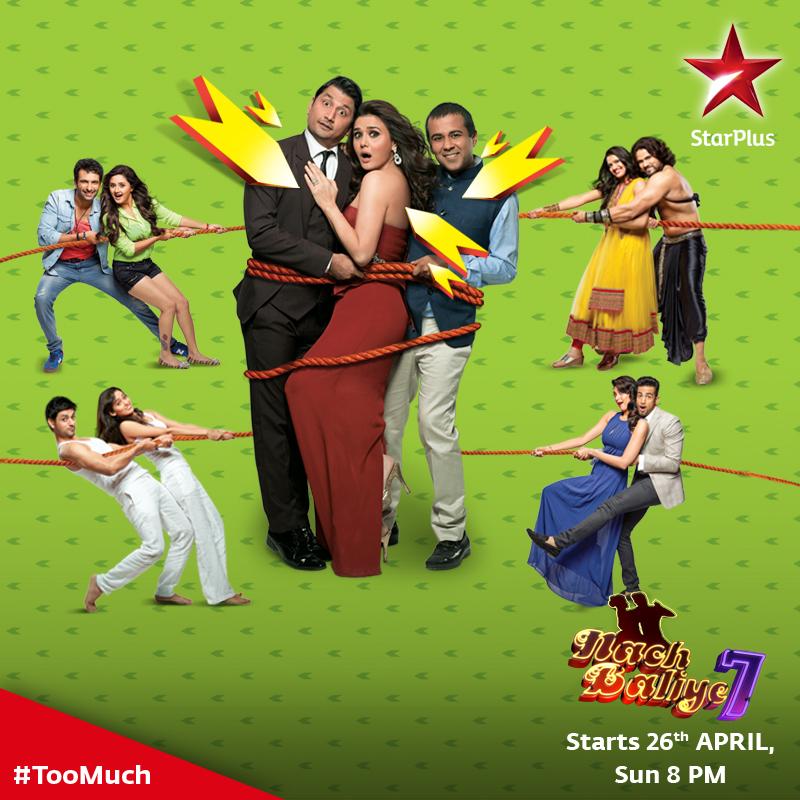 Nach Baliye 7 started on Star Plus with the Grand Premiere night with performances from all 11 participating Jodis. The judges on the show are: Chetan Bhagat [Indian author, columnist, screenwriter and speaker], Marzi Pestonji [Choreographer], and Preity Zinta [Actress, Entrepreneur]. The Hosts are Karan Patel & Rithvik Dhanjani – TV actors & stars. They lighten the stage with their fun banter and bromance. Regarding judges, Marzi speaks his evaluation is on dance while Preity is more interested in chemistry & attitude; and Chetan speaks of seeing the story of contestant – true or false. Until the finals, the voting is in the hands of judges only. The public voting is scheduled for the finals.

Moreover, the contestant with maximum score in a week will be safe from elimination next week. Additionally, there is scoring for the weekday tasks and it is going to decide on the ones participating in elimination as well. Every week is a Dance face-off on Sundays @ 8 PM, and on week days – Mon to Sat @ 11:30 PM there will be challenges to test contestants on different relationship elements – Trust, Friendship, Love, etc. Wishing the best to all 11 Nach Baliye’s..

– With show’s format change, also marks the entry of Chetan. Chetan apart from writing, appears on Television debates on NDTV and other news channels. Recently, he became more active in Bollywood either because of his stories adaptation, or his more involved work as screenplay writer [Kick] and in filmmaking process. He spoke upfront on his evaluation approach in judging – on searching the story, and this is first innings on TV in full-time role. He shared his worry on this new journey at the time of joining Nach Baliye. All we can say is the new format – dance & additions, supports him.  Twitter pages of Chetan, Marzi, Preity, Karan and Rithvik.

* Rashami Desai Sandhu & Nandish Sandhu: TV actors
Both were last seen on Colors’ Khatron Ke Khiladi KKK6. They perform on Bismil song from Haider movie in contemporary dance form. After performance, Rashami shares about ups and downs in her marriage with Nandish, and Nandish concludes with vibrancy now they are very fine.

– Comments & Score:  Chetan: Performance good and asks about her courage, 8 pts; Marzi: Told them to improve performance, 8 pts; Preity: 9. Total Score: 25. Marzi speaks of having crush on only one TV actress, and the one is Rashami. Twitter page of Rashami.

* Amruta Khanvilkar & Himanshoo Malhotra: TV actors
Best Friends who translated friendship into marriage and they know each other since 10 years. Himanshoo recently portrayed the role of Rohit Mafatlal in Star Plus’ Airlines. They perform on Har Kisi Nahi Milta Yaha Pyaar song and dance by mixing both contemporary and aerial silk.

– Comments & Score:  Chetan: calls it Amazing, 10; Preity: Amazing, 9; Marzi: Dance is just dance, gives 10. Total Score: 29. All three judges give them standing ovation. Amruta shares on how she receives gifts from Himanshoo for 23 days as her birthday falls on 23rd November. While she gives gifts to Himanshoo only for 2 days since his birthday falls on 2nd April. Twitter page of Himanshoo & Amruta.

– Comments & Score: Chetan: 8; Preity: 9; Marzi: speaks of connected & good presentation, 9, Total: 26. Shakti drapes a saree on Radhika Madan first and speaks the dialogue as RV to Ishani about his love for her – Meri Aashiqui Tum Se Hi. Shakti enacts the same scene with Neha and showers love, and thanks her for coming in his life. Twitter page of Shakti & Neha.

* Arpit Ranka [TV actor] & wife Nidhi:
Arpit last played the role of Duryodhan in Mahabharat. They perform on Devil Mera Yaar song from Kick movie, and portrayed the tussle between angel and devil, and how later the devil becomes an angel as well.

– Comments & Score:  Arpit shares his story on running away for marriage with Nidhi since both their parents weren’t agreeing with their caste. Nidhi laments on not having the Kanyadaan. Arpit speaks of how he is very fond to his mom. Chetan speaks of having crush on Preity during his engineering studies. Chetan gave 7; Preity gives 9; Marzi: Talks about Arpit haven’t danced before but showed fun, and gives 6. Total Score: 22. Twitter page of Arpit.

* Mrunal Thakur [TV actress] & Sharad Tripathi [TV writer]:
Mrunal Thakur is a Maharashrtrian, and currently works as Bulbul in Zee TV’s Kumkum Bhagya. Sharad is from Kanpur, Uttar Pradesh. They met just out of luck and began meeting often and then got in love. By means of Nach Baliye, they are expecting approval from parents. They perform on Tu Hai Ki Nahi song. Sharad pull it off well by showing expressions and lip sync.

– Comments & Score: Chetan: gives 9; Preity also gives 9; and Marzi: 7. Total: 25. Chetan asks them on the toughest moment in their love. Sana replies during rehearsals. Chetan learnt they are in a relationship since few months and asks them to be just real on the show. Twitter page of Sana & Dipesh.

– Comments & Score: Chetan: gives 8 and asks Upen about his love. Upen replies on love just happen and he knows on having strong heart. Chetan makes a comment on checking about real vs. reality show couple. Preity: gives 9; Marzi: comments on karishma’s dancer ability is shown, and gives 9. Total: 26. Twitter page of Karishma & Upen.

– Comments & Score: Chetan: Fun act & calls them strong contenders, 7; Preity: gives 9; Marzi: compliments Rohit on mimicing Govinda well.; and she is expression queen, gives 8. Total: 24. Aishwarya gets a surprise to see her dad. She got support from her dad for Miss India participation. Her dad speaks of having assurance about Rohit since he met him 7 years ago with qualtities of family and responsibility seen in Rohit. Twitter page of Rohit & Aishwarya.

* Payal Rohtagi [TV actress] & Sangram Singh [Wrestler; reality show contestant]
They perform on Abhi to Party Shru Hui Hai. remix version. song. The theme was she drove him into a haunted house. They showed intensity, jumps and reverse spin in their dance moves.

* Smilie Suri & Vineet Bangera: Professional Dancers
Emraan Hashmi [Actor & Star] speaks of Smilie and he is like her brother alongwith Mohit Suri who is brother of Smilie. Smilie was fixed on norms and specifications for her BF and finally she found Vineet perfect match for her. They perform on Judaa Hoka Bhi song plays in contemporary fashion, and then Salsa dance on Matlabi song. They showed trust in each other with their free flow, lifts and jumps.

* Jay Soni [TV actor] with wife Pooja Shah
They perform on Hum Tere Bin song.. from Aashiqui 2  and their dance style is contemporary but in slow motion.  Pooja is now a fashion designer but studied law. She has an arranged marriage with Jay.

* Nach Power Couple of the Week: Himanshoo & Amruta are the recipient since they got 29 pts, and thus going to be safe from elimination next week.