The Rajkumaris make food in the competition. Kaurvaki presents the food she made, and also the types of sweets. Everyone serve the food to Sushim and Ashoka. Ashoka was about to eat sweets by Kaurvaki’s hands, but Sushim comes in between to have the sweets. Sushim gets poisoned instead Ashok. Kaurvaki feeds sweets to Sushim. Sushim holds his neck and falls down. Ashoka and Kaurvaki get shocked. Ved ji checks Sushim and says he is poisoned. Sushim is rushed to get treated. Bindusara gets angry on Ashoka for planning to kill Sushim. He puts a sword on Ashoka’s neck angrily. Sushim gets saved.

Kaurvaki gets clueless about that sweets, as she did not prepare it. Sushim gets mistaken that this scheme was played to kill him, while someone tried to kill Ashoka. Sushim was in love with Kaurvaki, and doubts her. Nandini makes those sweets and is worried that everyone will target her now. Bindusara consoles Charulata and assures Sushim’s welfare. Ashoka is in dilemma to marry Kaurvaki or not. 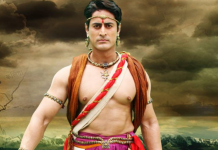 Ashoka and Kaurvaki’s marriage gets a shocking twist