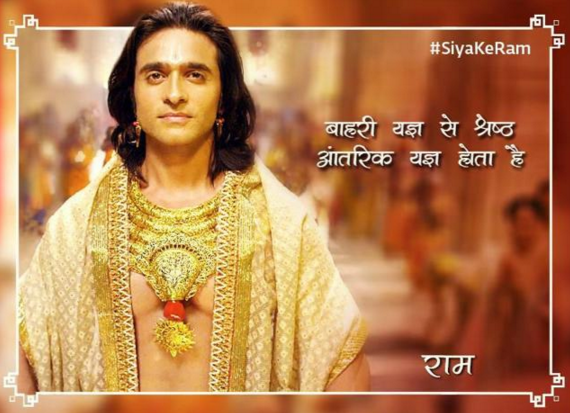 Raavan has sent Akampana whom his trusted the most. Raavan was sure that Akampana would win because of Kaal Bhairav’s blessing on Akampana. Even then, Akampana gets killed by Hanuman and Laxman in the battle. Akampana’s death shocks Raavan. Raavan then prepares his next demons. All the demons try to create havoc in Ram’s camp. Upach, the snake demon bites all the vanar sena and makes them vulnerable, even then the monkeys do not lose life because of Devi Sita’s prayers.

Ram spares Akampana’s allies and refuses to kill them. They all turn good and decide to walk on Dharm’s path, shown by Ram. Ram angrily challenges Raavan to fight with him. Raavan sends his soldiers to wake up Kumbhkaran. Raavan commands Kumbhkaran to go in the battle field. Kumbhkarana refuses and tries to explain Raavan to leave this crazy thought of defeating Ram. Even then, Kumbhkaran fails to put sense in Raavan’s mind. Raavan insists and sends Kumbhkaran into the battle fields.

Kumbhkaran meets Vibhishan and tells him that he does not wish to get involved in this Dharm Yudh against Ram, but he has to support his family. Kumbhkaran proceeds to wreak mayhem in Ram’s camp. Kumbhkaran would be dying by Ram’s hands and get blessed seeing Lord Vishnu’s avatar. Meanwhile, Meghnadh decides to go into the battlefield himself. Sulochana tries to stop him and tells him that she will kill herself if anything happens to Meghnadh. Meghnadh and Sulochana share an emotional moment. Meghnadh assures her that he will come back victorious and leaves. Laxman vows to kill Meghnadh and would be doing Meghnadh’s Mukti from Adharm in the battle ground. Keep reading.