Shakti: Soumya has come home. She has broken seeing Nimmi’s dead body. She can’t accept Nimmi has left them. She apologizes to Nimmi and asks Surbhi to apologize too. She asks Surbhi to wake up Nimmi.

Surbhi cries and wants Soumya to accept the truth. Surbhi tells Nimmi has left from the world. Soumya says Nimmi is sleeping and will wake up. She does not accept Nimmi’s death.

Sonakshi surprises Dev. There is love mischief going on. They trouble and taunt each other, while their annoyance track with romance is going on.

Kartik is upset meeting his dad. Kartik meets his relatives. He is angry and frustrated. Naira cheers up Kartik. Kartik tells Naira that he does not want to talk about his father. He reacts angrily. Naira gets annoyed. He apologizes and holds ears. Naira forgives him. Kartik asks her not to spoil their moments by talking about anyone else.

Radhika acts sweet to everyone and fools them. Radhika plans to run away before marriage with cash and jewelry. Radhika steals the jewelry and puts in her bags. She thinks to take the jewelry out of the house. She tells Urvashi that its her old clothes and she wants to donate it to ashram. Urvashi gets impressed by her.

Kiara takes care of Rishabh, when haldi goes in his eyes. Raina gets tearful eyes and holds a fake smile infront of Rishabh, which makes him think Raina is happy for his marriage. Rishabh is not happy with the marriage. Shivam is worried seeing Raina’s worry. He feels sad when Raina gets restless to find Rishabh. He gets heartbroken seeing Raina in love with Rishabh. 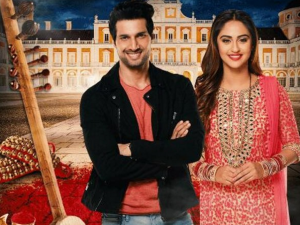