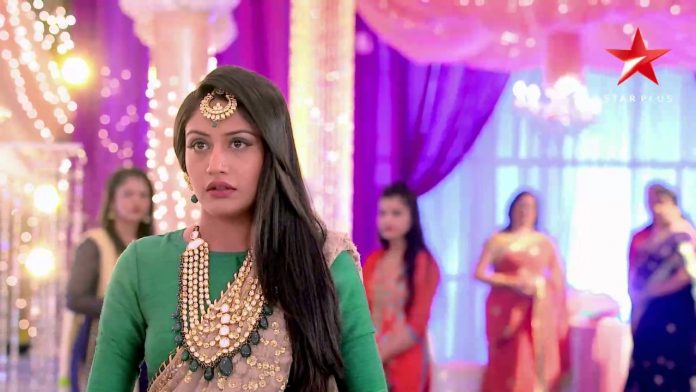 When Shivay has done mistakes before, Dadi did not do much to stop him. But, when he was going to do a sin to remove Anika’s mangalsutra, Dadi stops him and asks him not to do so. Shivay asks Dadi not to get emotional, as he is going to give divorce to Anika.

Dadi angrily asks both of them to do anything and take divorce, but till they are together in the pure institution of marriage, they will stay together and respect each other. Anika can’t forget how Shivay forced her to marry. She tells Dadi that she can never forgive Shivay. Dadi asks her to respect marriage, the mangalsutra and sindoor. Dadi believes in Shivay and Anika’s marriage and the fate which united them. She requests Anika to come to Oberoi mansion. Anika refuses to go with him. Dadi makes Shivay request to Anika by shedding tears and emotionally blackmailing him. Shivay asks Anika to come home for Dadi’s happiness.

Anika agrees to go with them. Shivay gives the gift to Anika from Dadi’s side. Anika finds him emotionless and rude, yet they both share silence emotions conveyed by eyes. Shivay gifts a box to Sahil too. Sahil shows attitude and asks Shivay to keep it there. Shivay teaches some manners to Sahil. Sahil in turn teaches manners to Shivay. Sahil calls him in Anika’s language. Shivay finds him similar to Anika, with equal attitude.

After Shivay and Anika’s marriage track, Randhawa-Priyanka and Soumya-Rudra’s track will re-begin. Rudra and Soumya share a talk about Shivay and Anika. Soumya tells Rudra that the married couples should stay together, as marriage is not a joke. Rudra recalls their marriage. Soumya does not imply this for their marriage. Rudra tells Soumya that he dislikes Tia, but he has sympathy for Tia, who got kidnapped before marriage. He is happy that Shivay married Anika. Soumya believes in destiny and tells Rudra that fate has united Anika and Shivay, who are made for each other. She tells him that fate unites lovers even if they are away. Rudra does not understand what she means.

Tia wins more sympathy from Shivay by shedding tears. She shows the newspapers. She says world knows we got married, but its all over for me. She says I can’t blame anyone, but the fate has made me a guest instead daughter in law of this house. Shivay asks her to come home anytime she wants. She asks by what right can I come and directs his thinking to accept her. Will Tia’s truth come out? Keep reading.