Sasural Simar Ka: There is huge family drama. Anjali got the family shattered. Anjali blamed big things on Tai ji and got Tai ji arrested. But, Tai ji’s truth has come out. Anjali’s plans got exposed.

Vikram asks Anjali to see Tai ji’s state. Anjali asks what could I, Tai ji was not accepting me as bahu, so I decided not to tell Tai ji come between us. Anjali scolds Tau ji in front of Vikram. Simar loses temper seeing this. She scolds Anjali for insulting the relation. She asks Anjali how can she insult husband and wife’s relation, Vikram is in pain because of Anjali. She says Vikram did not say you anything, but who is Anjali to break him from his old relations. Vikram is not ready to forgive Anjali. He says I could have forgiven you for theft and lies, but I can never forgive you for what you did with Tai ji, I m ashamed to listen to you and insult Tai ji.

Kabir lifts Thapki and takes her out for the haldi rasam. Bihaan sees them and is angry. Thapki asks Kabir to put her down. Kabir says you are my wife, you should be happy that I love you so much. Kabir makes Bihaan jealous. Kabir puts Thapki in haldi milk tub. Kabir watches Bihaan jealousy. He wants to hurt Bihaan. Kabir feels hurt seeing Thapki hurt, but he has to take revenge. Kabir applies haldi to Thapki. Sankara comes to Bihaan and provokes him against Thapki.

Rishi was drunk and drove out of the house. Rishi meets with an accident. The family rushes to meet him at the hospital. Rano blames Tanuja for bringing bad fate for Rishi. She asks Tanuja to stay away from Rishi.

Vibhuti tries to impress Angoori ji. He gets jaggery and groundnut, which Angoori likes a lot, as its good combo to get rid of cold.

Chandra realizes his mistake and goes to apologize to Nandini. Chandra always shouts on Nandini, but she gets surprised when he apologizes to her. Nandini was blamed to attack on his other wife. Chandra was angry and punished her. Knowing Nandini is innocent, he goes to apologize to Nandini. He also praises Nandini, but knows he can’t get friendly with Nandini. Very soon, their misunderstandings will get cleared. 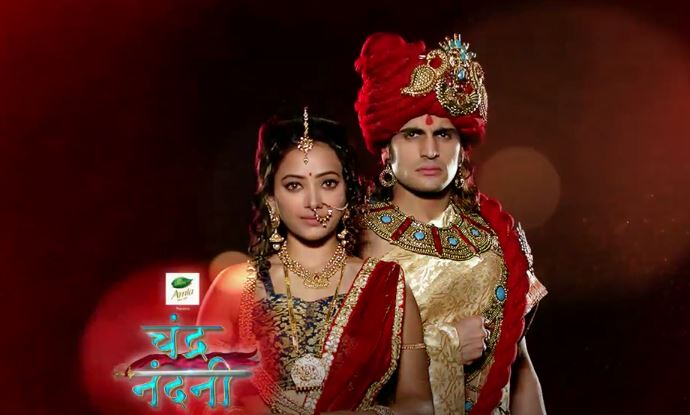 Rocky’s car breaks down on the jungle way. Shivangi is with Rocky. They get shocked seeing a sandstorm coming. Shivangi knocks on the window, as door does not open. Rocky tries to open the door.

Shivangi flies off in the storm. Rocky goes mad and wants to save Shivangi. Rocky gets injured and rushes to find her in the jungle. He shouts where are you Shivangi, I love you a lot. He cries thinking he has lost Shivangi forever by the storm. Later, he finds Rudra and Shivangi together. He feels Shivangi is cheating him. Shivangi and Rudra just have revenge motives in common.