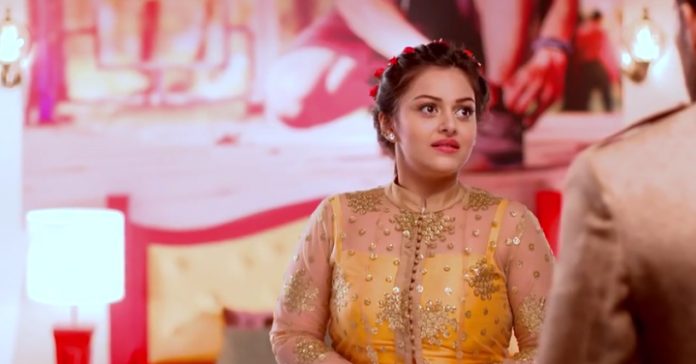 Rudra tells the entire marriage truth to Shivay and Omkara. Rudra tells them that Romi was going mad after me and I was running away from her, Soumya and I went to community wedding centre unknowingly, they made us drink desi wine, we both did not know about our marriage, we were not in senses, this marriage does not have any meaning. Omkara asks Rudra is he mad to say this, after all its marriage. Rudra does not accept his marriage. Shivay asks Rudra what does Soumya think. Shivay himself asks the truth from Soumya. He tells her what Rudra told them. He asks Soumya does this marriage mean to her.

Soumya calls the marriage a mistake. She says its true, we were not in our senses. Rudra says we decided to forget this marriage, as we are not a match. Shivay asks Rudra to shut up and let Soumya speak. Soumya has same opinion as Rudra. She gets hurt as this marriage does not mean anything to Rudra. Shivay says then there is no problem, let’s forget about this marriage. Anika asks Shivay how can he discard the marriage, marriage has happened, but Rudra and Soumya have taken the marriage vows together. Shivay says if they both don’t believe in this marriage, it’s completely fine to break it, such marriage will be just a compromise, no need to take it seriously.

Anika asks Shivay does he think so. Shivay says seriously, now none should know that Rudra and Soumya are married. Jhanvi hears the entire conversation. She informs Tej about Rudra and Soumya’s marriage. Tej asks her to forget the marriage if Rudra and Soumya want to forget the stupidity, their marriage. He asks her to go with the flow and welcomes Chaddas for Roka. She asks him how can he force Rudra. Tej says Rudra is not acknowledging the marriage, what shall I do. She asks him to guide the right way to Rudra. He says I can’t lose this deal. She does not want to compromise with her children’s future. She declares she will not let the marriage happen. Tej and Jhanvi end up arguing again. Tej is adamant that Rudra and Sonia’s Roka will happen. Jhanvi stands against it. Keep reading.