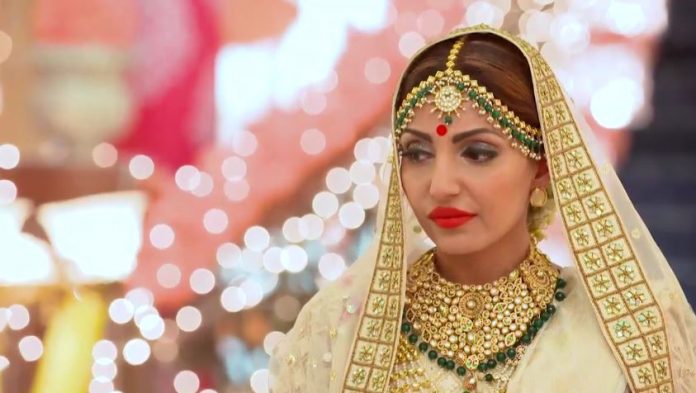 Mrs. Kapoor tells Shwetlana how she fooled Shivay by sending a random video to Omkara. Shwetlana praises her plan to get Tia and Shivay married by using Omkara. Anika calls up Shivay. Pinky tries to avoid her call, but Mrs. Kapoor answers the call. Mrs. Kapoor hears Anika telling she has dung Dushyant, and getting him home. Anika asks Shivay not to marry Tia and stop the marriage. Mrs. Kapoor goes to check Dushyant and gets relieved finding him in her car. She thinks Anika lied to Shivay to stop the marriage. She gets determined to fail Anika in her attempts. Anika follows Mrs. Kapoor and finds Dushyant.

Tia and Shivay take the wedding rounds. Pinky corrects pandit from making groom and bride perform wrong rituals. She calls Rudra to get pictures clicked. Shivay covers up and asks Pinky to not delay the marriage. Pinky jokes on his hurriedness. Tia and Shivay’s ghatbandhan gets a knot and stops them. Dadi passes remarks on Tia. Shivay and Omkara wait for Anika. Anika and Khanna take Dushyant home. Their marriage gets completed. Anika enters there with Dushyant. Pinky turns annoyed seeing her, while Mrs. Kapoor and Shwetlana lose senses.

Anika argues with Pinky and calls Dushyant inside the mansion, shocking Tia the most. Tia realizes Dushyant is alive, and her mom has cheated her till now. Pinky says he is Tia’s brother Robin, Anika has gone mad. Anika says he is Dushyant, he is Tia’s husband. Tia introduced him as Robin to fool everyone. Pinky asks Anika to stop her disgusting talk. Shakti asks Anika to stop it, as Shivay and Tia got married now. Anika brings the truth out.

Shivay scolds Anika for putting such disgusting blames on Tia. He tells that Tia’s child belongs to him. Shivay asks Robin will he quietly stand when Anika is blaming him and Tia. Shivay asks Robin to leave if he can’t take a stand for Tia. Robin calls out Tia. Shivay pushes him down and hurts him. Tia shouts Dushyant and runs to him. Tia admits that Dushyant is her husband. She apologizes to Dushyant. Oberois understand that Tia loves Dushyant, and has been cheating till now. Tia and Dushyant hug and cry for the separation. Tia and Dushyant thank Anika for uniting them, and saving Dushyant’s life. Dushyant tells Tia that Mrs. Kapoor kidnapped him and declared him dead. Mrs. Kapoor’s evil gets exposed in Tia’s eyes.