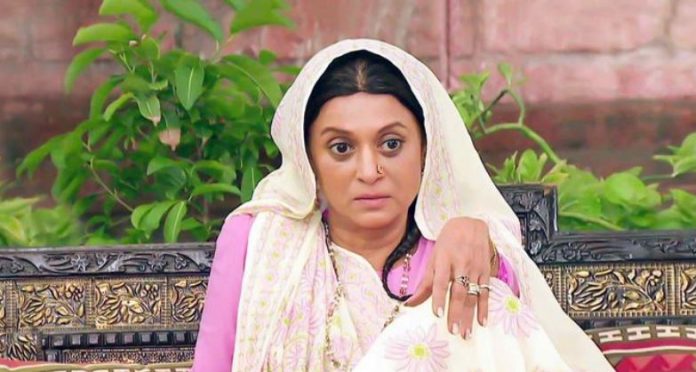 Amit finds out Aarti’s husband Ajay. Shanti, Kaushalya and Amit meet Ajay to know about Aarti’s failed marriage. They ask him about Aarti. Ajay speaks ill about Aarti. He says she had an affair with many men, I was mad seeing her bad character, she did wrong with me, she got all her lovers and made them beat me, I was so insulted that I had to leave from the locality, even then I told her that I love her a lot, we will start a new life, but she did not had to listen to me, she gave me divorce papers. He says she forced me to sign divorce papers, she said she is a free bird and will talk to anyone she likes, I told her that I will not sign on papers, so she has filed case on me, its good if your son and daughters get saved from her. He tells Kaushalya that Aarti is a eclipse which will ruin her home. He says she was a bad character girl. Amit asks why did you not tell me about her.

Ajay asks did you tell me that you are getting married to her. Amit says you were missing, how would I inform you. Kaushalya says so Amit and Ajay are friends. They believe Ajay. Kaushalya hates Aarti even more. Ajay gets angry in heart knowing about Aarti’s second marriage. He does not want her to stay happy with Shivam, and tries breaking her marriage. Raghav defends Aarti and asks what’s her mistake if her husband left her. Shanti says we are facing problems by keeping a divorcee home. She asks Raghav to understand Aarti is wrong. She says everyone thinks our standards have fallen low, now men are troubling Nimmi. Raghav says I regret seeing your thinking. Shanti calls him blind. Raghav asks them not to encourage wrong thinking. Shanti tells him to live according to society rules. He asks her to change his thinking about Aarti.