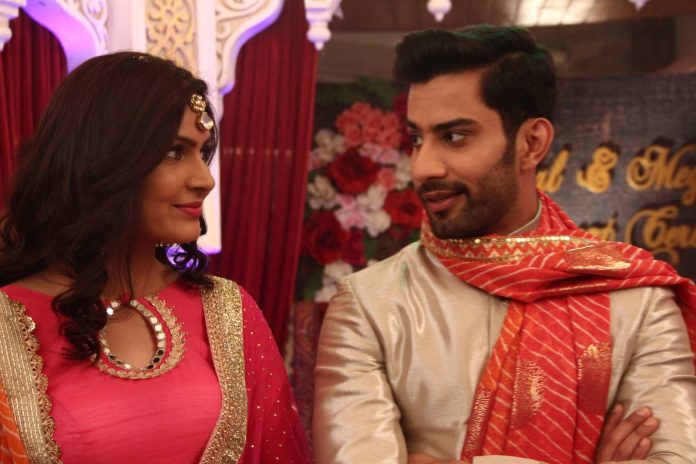 Meghna, Naina and Kunal expose Saavri and save Karan from the shock. Naina gives the photos to inspector and says Saavri came with the photos to me and blackmailed me. She asks me not to marry Karan, else she will get him arrested. Saavri cries and does drama to gain sympathy. Naina proves Saavri’s crimes. Police comes to arrest Saavri. Her truth comes out. Saavri had taken Naina’s place in the mandap to marry Karan. Saavri gets caught up by everyone. Saavri attacks on Kunal with a knife. She gets angry on Chauhan family as they have failed her. Kunal gets saved. Nandkishore does not give a chance to Pushpa and Saavri. He slaps Saavri.

He asks Saavri to stop her drama, how dare she blame Karan for molestation, when Karan was treating her as a friend. He asks inspector to take them away. He asks Dada ji to continue the marriage rituals, as Karan and Naina are waiting in mandap. Nandkishore says I have forgiven you when you have blamed Karan, but I will not spare you, you have attacked Kunal, I can’t tolerate anyone hurting my son. He wants Saavri to get punished. Saavri was thinking none can catch her if she sits as bride. Her plan badly failed. Saavri tries to tell a secret to Nandkishore. Sandhya shuts her mouth with a tape. Nandkishore sends Saavri and Pushpa to jail.