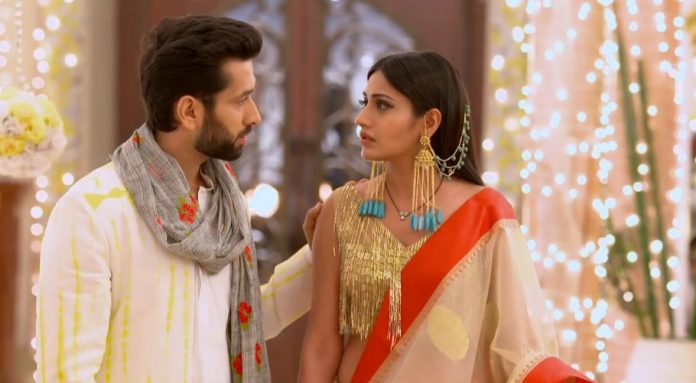 Shivay and Anika celebrate their chunri rasam in the police station. Dadi’s best friend Taadka brings some twists. The family then goes home and celebrates the ring ceremony. Shivay and Anika have few moments of romance, love and anticipation. Shivay steals some moments privately and makes Anika wear the ring. Shivika’s romance occupies the screen. Shivay and Anika’s haldi rasam will be seen in coming track. Shivay and Anika look amazing in their new look. Oberoi mansion gets decorated beautifully. Shivay and Anika try to steal a glance.

Dadi tells Shivay that its his life’s biggest day today. She takes him for haldi ceremony. She makes Shivay sit in the mandap for haldi and then gets Anika to seat her in the opposite mandap. Shivay and Anika smile seeing each other. They then get separated by a curtain. Jhanvi starts the haldi rasam for Anika. Dadi tells Shivay that Pinky will apply him haldi first. Shivay asks Dadi to apply haldi. Dadi makes Pinky apply haldi to her son. The haldi rasam then turns to holi. Everyone throws haldi at each other and celebrate. Pinky stays unhappy. Everyone dances with Shivay and Anika. Shivay turns much romantic. He is much excited for his marriage. Pinky is annoyed with Anika, and Shivay stays distanced from Pinky. He wants Pinky to accept Anika by heart. Pinky dislikes Anika.

Rudra adds some cheerful moments. Rudra says its haldi’s holi and tries to color his brothers. Omkara and Shivay throw the haldi at Rudra. Shivay and Omkara laugh seeing Rudra. Rudra jokes on Omkara and throws haldi at him. The holi fight starts. Even elderly Tej, Dadi Shakti and others get playing the holi. Shivika’s haldi gets a twist. They all color each other and dance. Pinky was making everyone upset by her doings, but now she is bonding with family. Shivay celebrates haldi with his brothers. They all try to throw haldi at each other and get hitting at wrong people. They all get crazy and play haldi holi. Badshah will be coming to grace Shivika’s Sangeet function. Badshah will be seen performing on his hit songs.