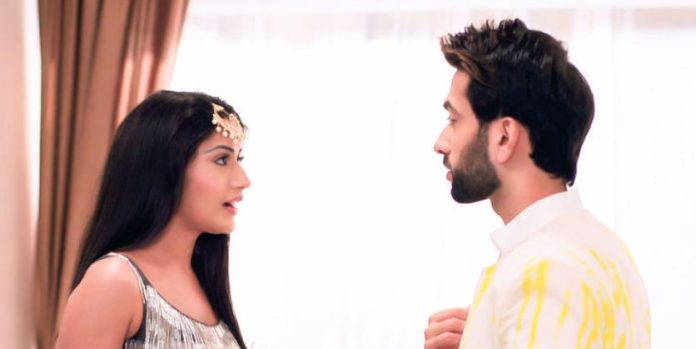 Anika and Shivay get remarried. They have a cute moment. Anika feels bad omen when her bracelet breaks. Shivay joins it and makes her wear it back. He asks her not to worry for anything. Shivay thinks of calling Gauri to get her back home. Omkara gets mistaken about Gauri, that she is cheating on him. Shivay gets the chit by some mysterious girl, who gives him a warning. He thinks of meeting the person to know who is trying to harm his family.

Omkara turns loving towards Gauri, but feels hating her more because of her deceive. Shivay reaches the place to meet someone. He gets aback seeing a shocking video. Sooner, Shivay meets with an accident. Anika waits for Shivay on their first wedding night. She senses like her breath is stopping. Tej happens to spot Shwetlana and follows her, but there is a hit and miss. Shwetlana wants the keys of that painting. She seeks help from Pinky. Tej gets to see Pinky with Shwetlana. Pinky lies to him.

Shivay gets missing. Oberoi empire faces tough time. The family worries for Shivay. They all have hope that Shivay will return. Everyone sheds tears when Shivay doesn’t return for many days.

Anika waits for Shivay. She feels Shivay will surprise her. She tells Dadi that she will meet Shivay at the same temple where they first met. She sticks to her belief and goes to the temple. She happens to see Shivay there, just like before. Shivay turns into a stranger for her. Anika gets glad seeing him. She tells him that she is his wife and she was waiting for him. Shivay denies to know her. A moment makes Shivay fill sindoor in her maang. She asks him not to go and come along to home. Anika gets angry by his behavior and breaks his car to remind him their old days. Shivay gets his lover along, which shocks Anika. Anika returns home and tells Dadi that she has done the puja with Shivay. Shivay makes an entry home. He gets his new lover along. The family gets happy seeing him back. The brothers have a union, while Shivay and Anika’s love story gets a new hurdle. Shivay declares he is married to Tania.