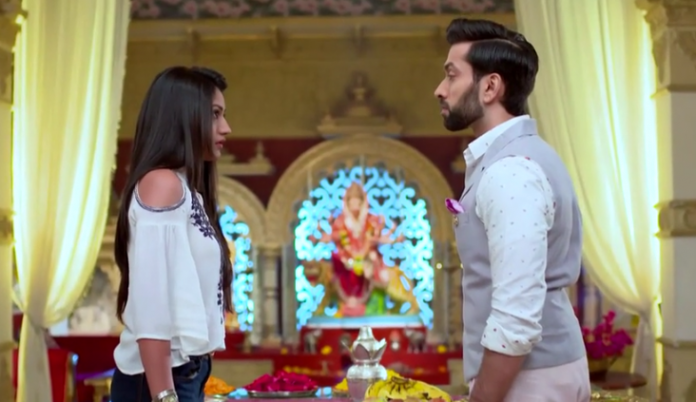 Anika reminds Shivay their vows. She tells him how much she loves him. She begs him to share the problems with her. Shivay agrees to share the matter. Shivay and Anika manage to fool Tania. Shivay shows the video of Kalyani Mills, by which he was blackmailed. He tells Anika that none from their family were present in the mills at the time of the incident. Pinky knows they have bribed the officer to make the false report. Shivay shows the video where Tej and Shakti are seen entering the mills. He fears that either of them can get trapped in the case.

Gauri asks Omkara to know the matter first. She talks to him in English and surprises him. She tells him how she was away from him to become suitable for him, so that he doesn’t feel ashamed to introduce her to the world as his wife. She confesses her love for Omkara. She tells him that she will not forgive Omkara as he has hurt her soul this time. Omkara doesn’t believe her. Gauri shows the evidences to prove she is innocent. She tells him that Arjun is her teacher, from whom she took English classes. She proves Omkara wrong. She tells him that she has always been true to him and their marriage. She refuses to accept him.

Omkara gets a shock. She clears all his doubts and leaves from his life. Omkara meets Arjun and clears the misunderstanding about Gauri. Omkara feels sorry, that Gauri got away from him because of his huge mistake.

Anika suggests Shivay that they should retrieve info from Tania. Shivay tells her that someone is heading Tania. Anika asks him not to worry, none from their family can be behind this incident. Anika supports him. He apologizes for failing to keep his promise of giving her happiness. Anika tells him that she is happy with him.

Tej and Shakti try to stay united in tough time. Shivay thinks of confronting them to know more about the incident. Shivay and Anika fool Tania, and steal a moment to romance. Abhay takes revenge from Bhavya, by getting her suspended. Abhay knows Bhavya has broken Rudra’s heart and ruins her career to settle scores. Abhay can’t see Rudra hurt. Bhavya decides to track the person, who has framed her.