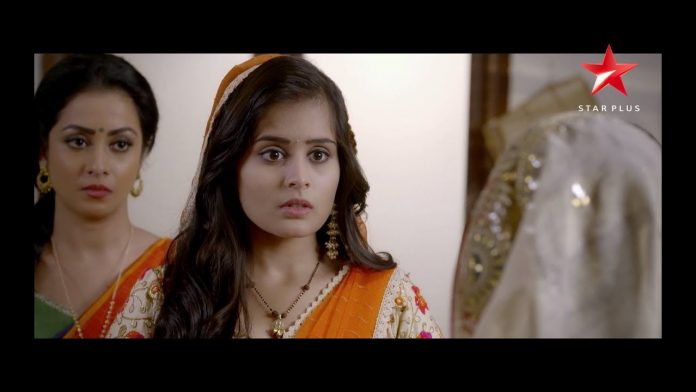 Kanak does Krishna Leela to explain Uma about his decision taken for Saras. She wants to tell Uma that sending Saras as Sevika is wrong. She wants to explain him the real meaning of Dharm. Uma and Kanak become Krishna and Rukmani. Kanak explains how a person’s heart and feelings are important than a promise. She shows that girls have no right to take decision for themselves. Kanak asks Uma if he believes in the story, why does he force his decisions on others. She apologizes to him. Uma tells her that Krishna always followed Dharm, and in every yug, Kanak will see people following Dharm.

Uma then understands what Kanak wants to explain him. Kanak is trying to pass a good message for everyone via the play. Kanak is determined to change Uma’s thinking. She succeeds to change his thinking. Bhabho and Babasa also attend the Krishna Leela. Uma changes his decision. He gets down stage and apologizes to Saras, for pressurizing her to become Sevika. He frees her from his promise and asks her to live a normal life. He apologizes to her. He gets a shock when he finds Saras missing. Shiv tells him that Saras has run away with a guy. Vansh has taken Saras with him for marriage. Saras is going to marry Vansh in temple. Uma tells Kanak that if Saras does anything wrong, he will never forgive her. How will their marriage affect Kanak’s life? Keep reading.