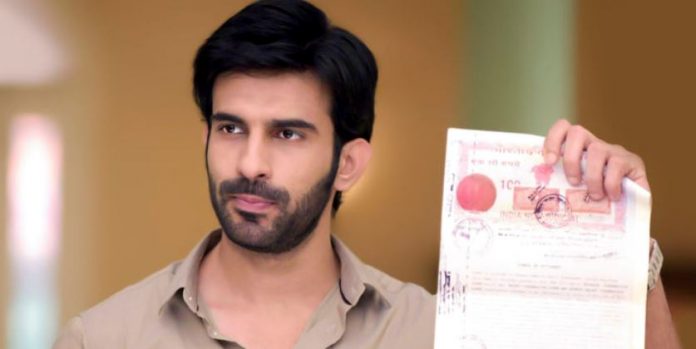 Satrupa and Anami get into a heated argument. Anami asks Satrupa to understand Sudha’s ill state and give her a place in Lal Mahal. Satrupa asks Anami to get out of Lal Mahal. She slaps Anami for her foolish stubbornness. Anami tells her that she wants justice for Narottam and Sudha. Satrupa tells Anami that she doesn’t want her. Pujan gets happy with Satrupa’s decision.

Anami gets reminded by Adhiraj that she is given special rights by the court. She threatens Satrupa of dire consequences. Adhiraj tells them that if Anami leaves the house, their bank accounts will be freezed, which will ruin Royal Steels. Dada ji gets angry on Anami for ruining their peace. Anami keeps the condition to accept Sudha if they want the settlement done peacefully.

Dheeru asks Adhiraj not to get lost in Lal Mahal’s lies. He asks Adhiraj to concentrate his power and strike at the right point. Dheeru tells him that he has to keep doing his duty and know about Sudha from the origin. Dheeru gives him info about Sudha. Anami puts efforts to settle Sudha in the house. Sudha pampers her with love.

Sudha makes Satrupa away from Anami. Baldev asks Satrupa to do something and stop Anami from ruining their house by getting Sudha. They both get into an argument. They blame each other for Sudha’s coming. Satrupa gets worried and thinks how to make Sudha out. Sudha starts her planning to win Anami’s heart and get Anami on her side. Anami doesn’t believe Satrupa. Satrupa gets determined to win against Sudha and Anami’s combo.