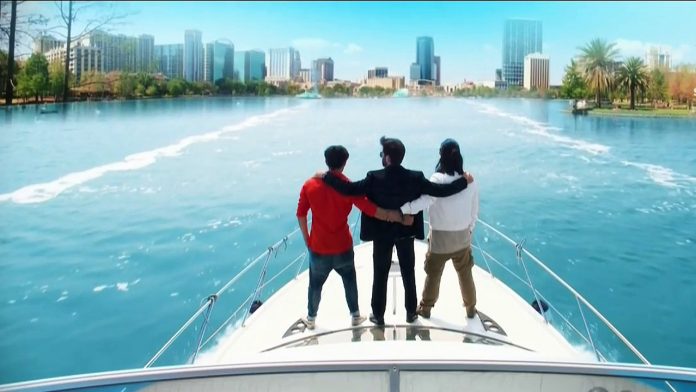 Rudra gets too emotional when his brothers don’t give him time. Rudra tells Dadi that he is finding his brothers getting away, since they got married. He expresses his sorrow. Dadi tries to explain him that his brothers have to give time to wives too. Rudra gets saddened. Dadi tells her that his brothers will always love him. She asks him to always love Shivay and Omkara. She says old relations get strong when new ones are made. She defends Anika and Gauri, who are good hearted, and won’t steal his brothers.

Rudra does a drama to take Jal samadhi in the pool. He gets attention of his brothers. Anika and Gauri take Rudra’s side. They complain to Rudra that his brothers didn’t let them open the door. Rudra keeps his condition of going Goa and attending the music festival. Omkara wants to take Gauri along. Rudra tells him that he just wants his brothers to accompany. Anika and Gauri ask them to go and enjoy in Goa. They bring the brothers together, who have a fun moment in the pool.

The brothers’ love gets witnessed again. Dadi wishes they always stay united. Pinky introduces her cousin Dinki to the family, who got cheated in love. Dinki tells them that men are not loyal. Anika and Gauri don’t agree to her. They are proud of their husbands and blindly believe them. Dinki tries to shake their trust.

Anika and Gauri pack the bags to help Shivay and Omkara. Dinki tells them that blind belief always fails a woman’s heart. She explains them that they did a big mistake to send their husbands to Goa. Dinki starts corrupting their minds. Dinki speaks ill about Shivay and Omkara. Gauri gets angered.