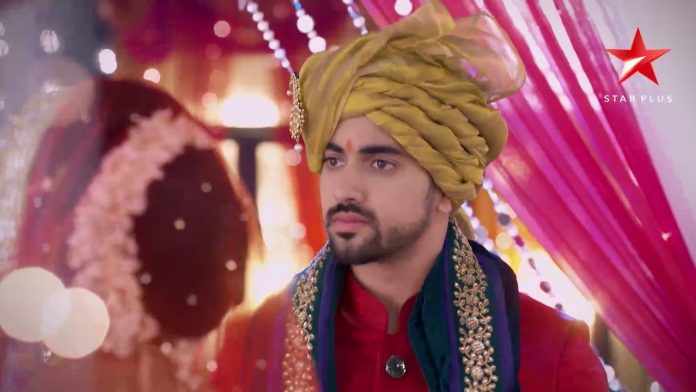 Juhi gets hurt by Mishti’s mistake. Neil calls a doctor home to get Juhi treated. Vidyut gets an entry in Neil’s house. Vidyut’s tortures get increasing. Vidyut comes in disguise of a compounder. Doctor finds the wound deep and asks Neil how did this happen. Vidyut tells the doctor that its a police case. The family gets a huge shock when they see Vidyut. Vidyut provokes Neil’s anger by reminding how he defamed Neil using the affair drama. Neil asks Vidyut to get out of his house. Vidyut asks Neil will he put him back in lockup, the media will not leave him this time. Neil asks Vidyut not to challenge him. Neil and Avni find Mishti scared of Vidyut.

After Vidyut leaves, Juhi starts her drama to accuse Avni. She calls Avni careless that she didn’t secure Mishti from Vidyut. Juhi blames Avni for making Mishti away from her. Neil says I understand your pain, but Avni is not the reason for your pain, she has gone through a lot in her life. Juhi says Mishti has hurt me for Avni, I m Mishti’s mum, I deserve her love. Neil asks her to think about Mishti, who was frightened by Vidyut and longed for family till now.

Juhi reminds that she was also captive and led a worse life for many years. She asks him did he ever think for her pain. They get into an argument. Neil gets angry on Juhi. Neil can’t hear a word against Avni and raises hand on Juhi. Mishti sees them arguing. Avni stops Neil and tells him that Mishti is watching them and she will get badly affected. She asks Neil to come to senses. Juhi asks Avni to stop her drama. Neil wants Juhi to understand Avni. He loses his patience. Avni feels guilty over the happenings.

Ragini Pandit gets a disguise and meets Juhi. Juhi gets angry that Mishti has hit her for Avni. Juhi and Mishti are sent to the park by Neil. He wants them to have a change and feel cheerful. Juhi hides from everyone and meets Ragini Pandit at a candy stall. They make a plan. Ragini Pandit wants Juhi to continue her lies and marry Neil. Neil also reaches the park. Ragini Pandit hides from him. Juhi finds Shweta clever. She stays alert. Shweta wants to tell Neil that Juhi is cheating him. Juhi and Ragini Pandit try to target Shweta, so that Shweta doesn’t flop their plans. Shweta learns the truth and tries to explain Bebe that Juhi is playing a game with them.

Shweta has done many mistakes in the past. Bebe doesn’t believe her. Ragini Pandit and Juhi target to break Neil and Avni’s marriage. Avni learns Juhi’s truth. She feels angered that she has trusted Juhi so much that she was almost getting away from Neil for Juhi and Mishti’s happiness. She wanted Mishti to get a good life and a happy family. Avni gets raging when she knows how Juhi has lied about Mishti’s paternity and fooled Neil and entire family. Juhi made Neil helplessly nod for marriage for Mishti’s sake. Avni decides to unveil the lies and fight for her rights, which Juhi was snatching by her fraud drama. Avni, who allowed Neil and Juhi’s marriage, takes a step to stop them in time and expose Juhi’s evil game.