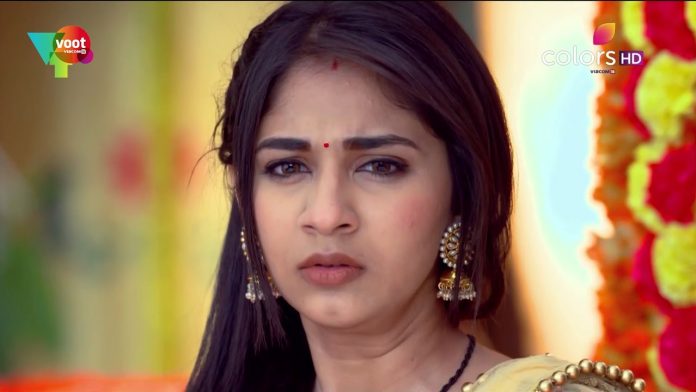 Chakor reaches the haveli and faces Imli. There happens a big drama. Chakor scolds Imli for all her wrong doings. Imli doesn’t love Chakor anymore. Imli thinks she is very powerful. Imli doesn’t regard Chakor as sister now. She doesn’t care what Chakor thinks about her. She has broken ties with Chakor. Chakor is much determined. She is not scared of Imli. She is disheartened to see Imli’s evil side. Chakor tells Imli that she will also break relations with her now. Imli expresses her hatred to Chakor. Chakor provokes her to tell truth, why did she do this with Suraj, she has ruined his life. Imli tells her that she hates her and also the people related to her.

She asks Chakor to think of Ranvijay, who can kill her anytime. Ranvijay gets angry seeing Chakor in the haveli. He asks Imli to explain her sister, that she can’t interfere in their work, else he will threaten Suraj. Imli asks Ranvijay not to kill Suraj, as he is their servant, who can do anything on their orders.

The flashback scene will show how Vivaan was murdered by Ranvijay. Vivaan was in coma. Imli asks Ranvijay to kill Vivaan. Ranvijay suffocates Vivaan to death. Ranvijay then marries Imli. Chakor doesn’t know Vivaan is dead. She asks Imli about Vivaan. Ranvijay tells her the entire truth, that he has killed Vivaan by his hands, and even Imli is happy with his crime. Chakor can’t tolerate this shocking truth that Imli got Vivaan murdered. Chakor tells Imli that if she hates her, she will also give it back to her. She says I m not your sister anymore, we will deal like contenders from now on. Ranvijay calms down Imli. They throw out Chakor from the haveli. Chakor sees Suraj and gets new hopes. Chakor wants to remind Suraj their seven vows of marriage. She reaches Suraj and faces his anger.