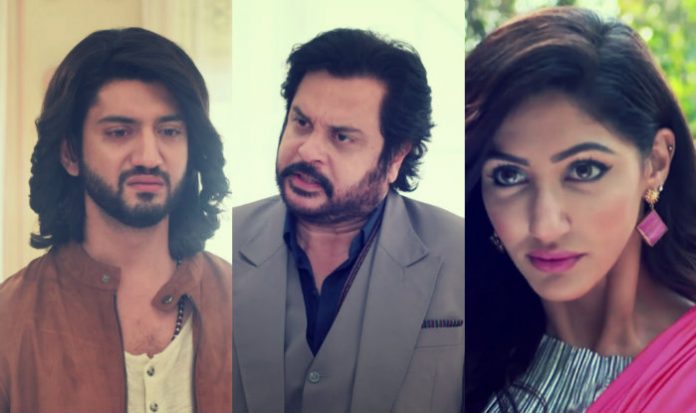 Dadi begs Tej and Pinky not to divide the house till she is alive. The Oberoi mansion gets divided. Tej makes the servant sketch a line, so that he can keep Pinky and Shakti away. He divides the family and relations too. Shivay has always kept the family united. Rudra asks Tej not to do this. Gauri asks Dadi to say something and stop Tej. Tej tells them that this is their side of the house and anyone from their family will not go to Pinky’s side, else they will see him dead. He says Pinky and Shakti won’t come on our side. Pinky angrily asks Shakti not to go on Tej’s side. She says what’s wrong if we have to divide the house, as the hearts have already got separated.

Jhanvi also agrees with Tej’s decision. Gauri begs Tej to change his decision. Tej doesn’t want Gauri and Rudra to be emotional fools. Gauri asks Pinky to settle the matter. Pinky doesn’t listen either. They lose sensibility in their anger. They don’t have any capability to think of the situation well and understand. Pinky is very angry as her son has left the house. She also commits the same mistake like Tej. 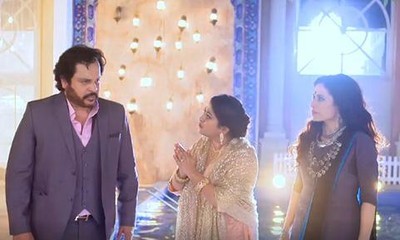 Dadi asks them to divide their mother as well, how will they divide her into two parts, how can they break her hearts. She feels Shivay would have never let this happen if he was here. Tej and Pinky justify themselves. Tej is angered as Shivay has no answer to justify his decision. Shivay is not able to tell them the reason, why he has given Omkara and Rudra’s shares to Shwetlana. Tej wants an answer. He takes this drastic step in anger. Pinky and Tej always wanted the house division, but stopped only because of Shivay. When Shivay is failing to keep them united, they feel the house division is better for everyone.

Shakti tells Dadi that Tej and Jhanvi did injustice with Shivay, they are wrong and its good if they divide the house and stay away. Pinky cries in memory of her son. She says Tej has done this with us, after Shivay left the house silently, he has given up all his rights to obey Tej. She worries for Shivay and Anika. Pinky wants Shivay to come back. Pinky doesn’t want to stay in Oberoi mansion. Shakti tells her that his mum is already broken down, if they also leave, his mum will shatter completely. He asks her to be strong and have hope, everything will get fine. She tells him that she loses her cool on seeing Tej. She wants to take revenge from Tej. She decides to trouble Tej and Jhanvi.

Just Shivay and Anika know the truth, which will be out to the family soon. Omkara makes an entry home when the house division gets complete. Omkara gets a huge shock seeing the unexpected changes in his home. Gauri asks Omkara to stop Tej and Pinky. Omkara hugs Gauri and assures her that he will make everything fine.

Rudra makes hot chocolate and misses Shivay. He doesn’t eat anything in sorrow. Omkara consoles Rudra. He asks Rudra to have food and take care of himself, since they have big task to get Shivay back. Shivay informs Omkara and Rudra that he has named their shares to them. Shivay convinces Omkara to manage business. Omkara attends office to manage Shivay’s work. Gauri tries to manage Anika’s duties at home. They try to keep the family together. Rudra and Dadi share their sorrow. Rudra doesn’t understand how to manage things.

Tia and Shwetlana succeed to take revenge on their biggest enemies, the Oberois. Shivay and Anika try to outdo Shwetlana’s plans by staying away. Shivay makes sure that his family stays safe always. He tries to get all problems on himself and divert Shwetlana. Will Tej learn Shivay’s big sacrifice and call him home? Keep reading.