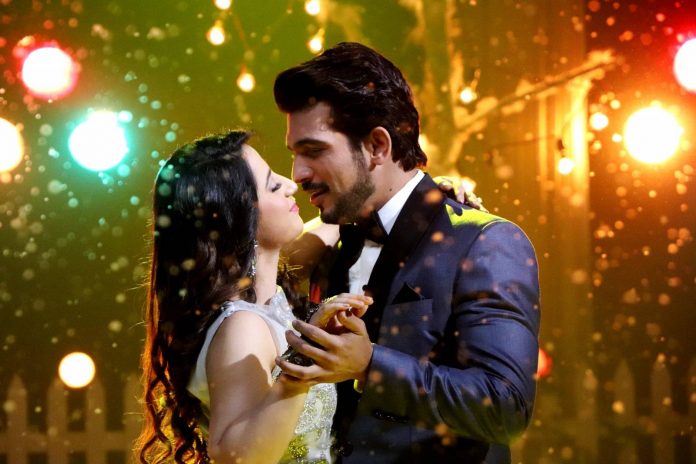 Tu Aashiqui and Ishq Mein Marjawa’s Maha sangam will get big twists. JD keeps a party at Dhanrajgir house. Ahaan performs in the party. Manav tries to stop Ahaan and explains him to think for their respect. A guest jokes on Ahaan for performing in his own house for money. The man asks Manav did he not find any other singer, the family is clever to pay their own son for performance. Ahaan fulfills his commitment. He sings a song for his love. Deep and Aarohi have a dance. After the musical song, a new drama begins. JD’s friend accuses Pankti for eyeing the rich men in the party.

The man tells everyone that Pankti was asking him for money, she came after him by her wish, who does such things, why did anyone call such a girl in this party. He says I refused to give her money, so she went to someone else. He raises a finger at her character. He says she was signing me to call me close. He asks who is this cheap girl, she looks innocent, but she is really characterless. Ahaan asks how dare you tease her, what did you tell about her. Ahaan loses his control and beats up JD’s friend. He can’t hear anything wrong about Pankti. JD asks Manav to control Ahaan. Aparna and Manav stop Ahaan. JD tries to make Pankti feel insulting. He lays this plan to trouble Ahaan and Pankti.

Pankti gets crying and runs away, being unable to tolerate any more blames. The man threatens to give Pankti to police. Ahaan goes after her to console. Aarohi comes there to prove Pankti’s innocence. She asks them to call police, she will give the statement. She tells them the truth, that the man was trying to misbehave with Pankti and forcing her to accept money. She says this man was trying to buy Pankti, while she refused to him, she was crying and shouting for help, she was begging him to leave her, and he tried to defame her this way. She says truth is Pankti is innocent, while this man is a devil. The man asks who are you to blame me. He gets angry on Aarohi. Deep defends Aarohi and beats up the man. He asks him not to say a word against his wife. The guests believe Aarohi as she is Deep Raichand’s wife. Aarohi and Deep take a stand for Pankti. Deep doesn’t want Aarohi to see Ahaan. He fears his truth will come out.