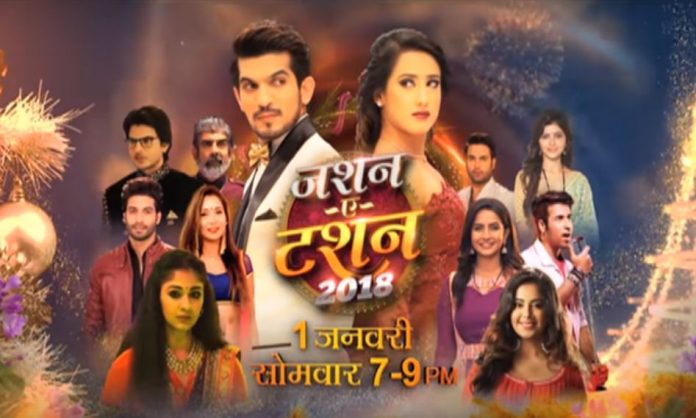 Colors is bringing a Mahasangam episode of its prime shows. The entire Colors’ team will be celebrating the new years. The party will have many twists. Sasural Simar Ka, Savitri Devi, Tu Aashiqui, Ishq Mein Marjawa, Shakti, Udaan and Laado 2 will have a big merger episode. Their leads will be seen performing in the party. Chakor sings out her love for Suraj, while he too leaves his anger. Chakor and Suraj perform on a romantic song. Mohini shows her style and tashan. She wants to spoil Mohini’s happiness. Tara tries to attack Aarohi. Chakor reaches there in time and saves Aarohi.

Deep, Tara, Mohini, JD, Imli, Suraj, Ranvijay and Balwant get on one side, while Chakor, Soumya, Harman, Prem, Simar, Anushka, Aarohi, Ahaan, Pankti are on another side. Chakor and Ahaan support Aarohi. JD wants to give a reply to Ahaan. Balwant and Rantej arrive in the party with evil motives. JD waits for a right chance to strike. Aarohi wants to ruin Deep and make him pay for his crimes.

Ahaan and Pankti dance and show their swag. Ahaan sings in the party and wants to show JD that no one can break his courage. Pankti supports Ahaan. Harman and Soumya become an ideal couple. Their love gets compliments from everyone. Harman expresses his feeling for Soumya. Their cute moments go on. Prem and Simar perform on a retro song, while Anushka lands there with new hopes to get Yuvraaj on her side again. Prem and Simar are the eldest couple in the party. They define true role and tell them about their long journey of love. Aarohi has known Deep and Tara’s truth. She has recorded their truth. She has the chip as evidence. She wants to expose Deep. She seeks help from Chakor, Soumya and Pankti. A new battle begins between the good and evil sides. Will Aarohi succeed to expose Deep? Keep reading.