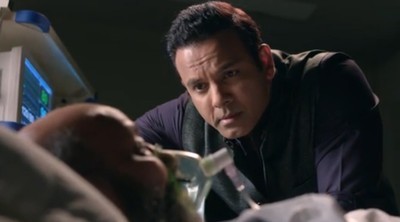 Anami demands Adhiraj to answer her about his arrest. She wants to know how he has fallen in a big trouble. Adhiraj refuses to tell her anything. He doesn’t want Anami to get more upset. He knows her pain very well. He hides about Satrupa’s revenge. Dheeru gets Adhiraj released on bail. Anami gets to meet Dheeru and learns Adhiraj is Dheeru’s son. Dheeru assures Adhiraj that none can harm him. He swears to destroy Lal Mahal. Dheeru tells Anami that Satrupa has framed his son, and she is the reason behind everything. Anami feels guilty. Dheeru tells Anami how Lal Mahal has back stabbed Adhiraj, when he was just helping her.

Dheeru tells Anami that now he will tackle Satrupa in his way. Anami fears knowing the entire matter. Sudha looks after Baldev, when he suddenly collapses. Sudha calls the doctor and gets him treated. She spends time with him in Satrupa’s absence. She asks Baldev to look after himself. Baldev thanks her for concern. Sudha tells him that she will leave once anyone comes back home. Satrupa finds Sudha in her room and gets angry on her. Baldev gets defensive of Sudha. He tells Satrupa how Sudha has done a favor on him by saving his life. Satrupa asks Sudha to leave.

Dheeru summons Lal Mahal members to get his wrath out. Satrupa finds Adhiraj free from the jail. She gets surprised when Dheeru defends Adhiraj. Dheeru exposes Satrupa’s misdeeds in front of the family. Satrupa asks Dheeru not to interfere in her family matters. Dheeru tells her that he won’t keep quiet if its about his son’s life. He reveals to them that Adhiraj is their son. He scolds them for striking his pride by framing his son. Dheeru defends Adhiraj’s capabilities and honesty. He tells Satrupa that Adhiraj is a sincere cop. He tells the elders that he will not bear Satrupa hurting Adhiraj’s reputation. He asks Satrupa to withdraw the case.

Baldev accuses Dheeru and Adhiraj for conspiring against them. He gets his personal grudge out on Dheeru. Things go out of hand. Dada ji worries for the dragging argument. Dheeru and Baldev get on threatening each other. Satrupa tells Dheeru that Adhiraj has helped Anami flee. Adhiraj tells Satrupa that he has already told her the truth. Satrupa gets on accusing him, without caring for Dheeru’s stand. Anami gets in the matter to defend Adhiraj. She tells Satrupa that Adhiraj has just supported her to protect her during the journey. She proves Adhiraj’s innocence. Satrupa doesn’t agree to Anami. She refuses to withdraw the case.