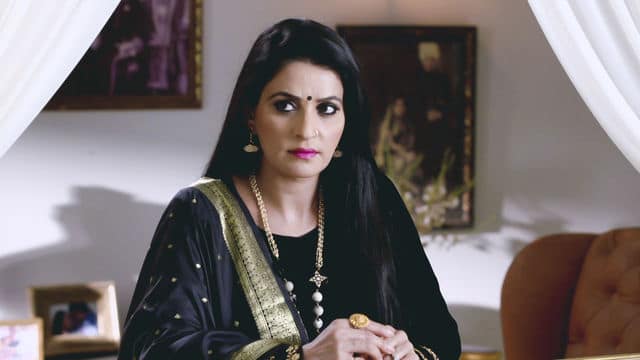 Sanjay wants to stop Durga from signing the deal with Aarti’s dad. Yashpal, Annapurna and Rana try to know what made Durga take this decision to withdraw her name from the national championship. Sanjay reveals to them about the deal Durga is going to sign. He tells them that Durga is sacrificing her happiness, dreams and career just to save their property and business from Aarti’s dad. He asks them to convince Durga against sacrifice her dreams. Yashpal and Annapurna feel proud of Durga, who chose her in-laws over everything. They don’t oppose her. Sanjay asks them to explain Durga, but they instead support Durga. They bless Durga and ask her to go ahead to complete the deal.

Aarti’s dad produces the deal documents and asks Durga to sign on it. Gayatri stops Sanjay from slapping Aarti’s dad. She acts to show she is on Aarti’s side. She makes Durga sign the papers. She thanks Aarti’s dad for giving her the house and business back. Sanjay gets disappointed with Gayatri.

Gayatri then surprises everyone by tearing the papers. She supports Durga and wants her to win the national championship. She tells him that Durga has enough talent to win the nationals without anyone’s help. She asks Durga not to care for her in-laws. Durga doesn’t listen to them. She is ready to make any sacrifice for Sanjay’s happiness. Gayatri tells Durga that she is like his daughter, and she wants her daughter to make her proud by winning the championship. She doesn’t get threatened by Aarti’s dad. She totally supports Durga.

Gayatri gets to her old form and protects Durga from their enemy. Sanjay gets surprised seeing his mum supporting his wife. Aarti’s dad vows to ruin Durga and her families. Gayatri doesn’t care for her family reputation. She tells him that she has done much wrong with Durga till now, and this time she really wants to repent for her mistakes. Sanjay and Durga get happy with the good change in Gayatri. Gayatri apologizes to Durga. Sanjay and Durga forgive her for the past.