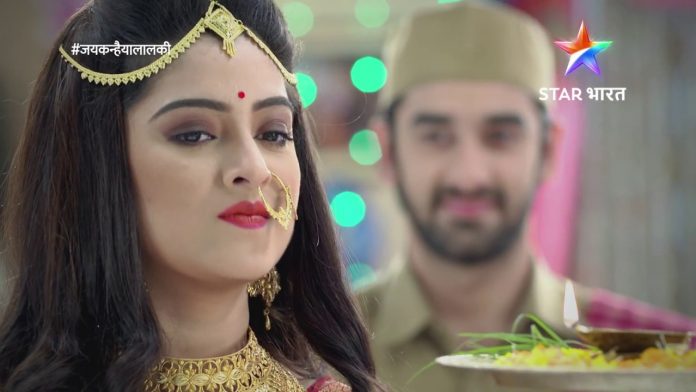 Janki organizes Daali’s Swayamvar. Daali spoils the Swayamvar by calling everyone at the same time. She creates much confusion to make things tougher for Janki and Kanhaiya. While Janki briefs her about the guys he invited for her Swayamvar, Daali doesn’t seem to be interested. Janki tells her that he has found the suitable guy for her. Daali doesn’t like Janki’s horrible choice. She finds the candidates too boring and older. Janki wants someone educated, confident and loving for Daali. Kanhaiya prepares Daali for the Swayamvar. She plans to give a big shock to Kanhaiya. She rejects all the guys. Daali mistakenly puts the garland in Kanhaiya’s neck. She plans to trouble Kanhaiya for his mischief.

Kanhaiya tells Daali that he can’t accept the garland. He passes the garland to Rocky, asking Daali to think about Rocky as the prospective groom. Daali turns furious over his words.

Kanhaiya then have a confrontation with Badimaa. He fails to give the reason for entering Daali’s room and checking the ancestral jewelry. He gets disappointed with Badimaa doubts on his intentions. Meanwhile, Daali tells Janki that she will never get married. She refuses to accept anything that happened in Swayamvar. Vaijanti doubts on the music teacher. She asks Kanhaiya to keep an eye on the music teacher and stop him from flirting with her daughter. Kanhaiya gets busy in his work, while Daali plans to settle scores with him.