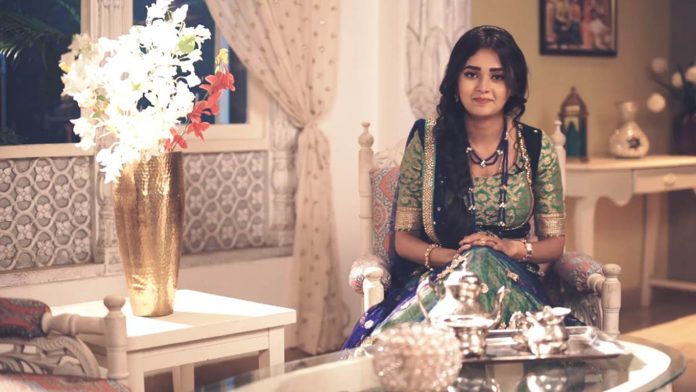 Diya gets a lovely surprise from Ratan. They have a romantic dance. Diya has realized her feelings for Ratan. Ratan kisses her. He shares the big news with Diya. He tells her that he has got his dream project sanctioned. He gives the good news to the family as well. Everyone congratulates Ratan. Ratan prepares to go for his project meeting. Diya finds the kiss mark and asks him to stop. She asks him to clean the mark. Ratan checks his face in the mirror. He finds a kiss mark on his cheek and asks Diya if she has kissed him. He teases her and says its obvious that she will kiss the one she loves. Diya couldn’t say that she kissed him while adoring him in sleep. Diya gets embarrassed and accepts.

Ratan tells her that he won’t clean the mark, its looking good and people should know his wife loves him. He pulls her leg. Ratan leaves for the meeting. Diya thinks what would be Ratan thinking about her.

She then worries that everyone can see the kiss mark and make fun of them. She worriedly thinks what to do. Diya calls up Yash to seek his help. She asks Yash to stop Ratan’s childishness. She confesses her love for Ratan in front of her best friend Yash. Yash helps Diya by giving her love lessons. He is happy that Diya is in love with Ratan. He asks her to confess love to Ratan soon. Diya decides to express her feelings to Ratan, but gets scared of the rejection. She doesn’t know if Ratan loves her or not. What would be Ratan’s reply to her love confession? Keep reading.