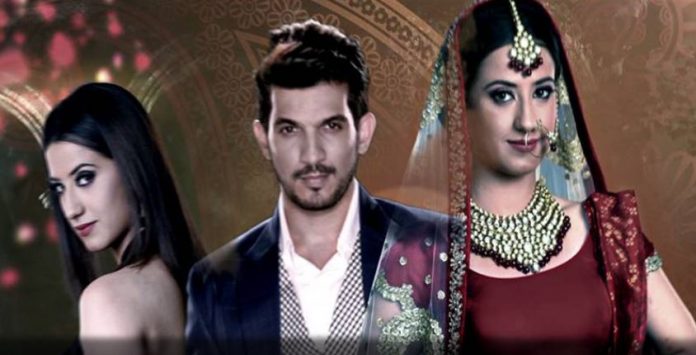 Aarohi doesn’t let Tara spoil her plan. She manages to switch places with Tara during the pre-wedding functions. She blackmails Tara about Roma’s life. She plans to use Tara again in the haldi function. Tara’s haldi ceremony happens. She also starts planning to expose Aarohi. She doesn’t want Aarohi to manipulate her family. She tries to expose Aarohi in front of Deep. Aarohi takes disguise of an old lady. She reaches Tara to blackmail her. Aarohi doesn’t want Tara to win any move. She makes Tara unconscious and kidnaps her again. Deep takes Nikku with him. He finds Nikku afraid. He asks Aarohi to come out.

Virat points a gun at Nikku and threatens Aarohi to come out. Aarohi comes there as Tara and shows her wounds to them, telling them that Aarohi has attacked on her and ran out of the window. Deep and Virat understand she is Aarohi. Deep asks her about the haldi marks missing from her face. His doubt gets certain.

Aarohi as Tara then fools them by revealing to them about Aarohi’s plans to kill Roma. She gets Deep in confidence again by showing the deadly necklace which could take Roma’s life. Virat also falls in her plans. Aarohi doesn’t fall weak. She turns the tables yet again and gets saved from Deep’s suspicion. Aarohi and Deep will get married, but with a twist. Aarohi will plan a honeymoon trip to London to fulfill her revenge motives. Aarohi would be attempting to kill Deep and punish him for his cheat.