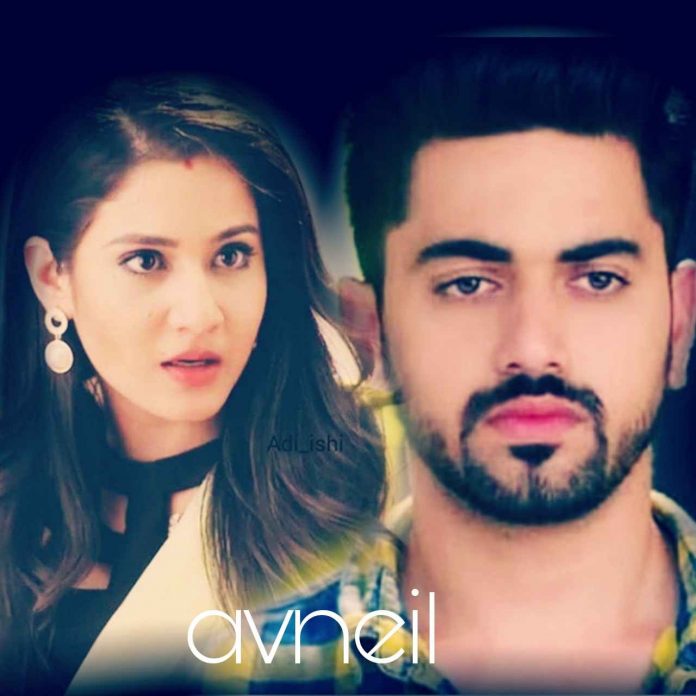 Avni imagines Neil reaching her and making a love confession. Avni’s heart melts and she accepts his love. Avni tells him that its difficult for her to live away from him. She too confesses love for him. Neil and Avni have an emotional union. She soon realizes that she is just yearning for Neil. She finds Neil and Mitali at the jewelry store, when she goes to sell her bracelet. She hides from Neil. Neil buys engagement rings. Neil learns Avni has sold her bracelet which he gifted her. He buys the bracelet back. He doesn’t want to lose such memories. Avni returns home. Neil meets her and returns her the bracelet which she tried to sell off. He asks her how can she sell a gift.

He asks Avni if she hates him and wants to end his memories. He tells her that he is making a donation which is his right. He asks Avni to keep the bracelet with her.

Neil gets disturbed with the thought of going away from Avni. He thinks of his tough decision to move on in Mitali. Sunehri asks Avni to stop Neil from making this blunder. Avni tells Sunehri that Neil has taken the decision and its better that he proceeds with Mitali. She doesn’t want Neil to get weakened by her love. Mogli decides to write a letter to his dad. Avni tells him that she would help him. She spends some good moments with Mogli, as his mum. Mitali gets dreaming about Neil. She looks forward to get engaged with Neil. Sunehri tells Avni that Mogli is crying to meet Neil and find his lost toy at Khanna mansion.

Avni doesn’t want Mogli to visit Neil on his engagement day. She asks Sunehri to take Mogli. Sunehri stays busy in her work. She asks Avni to take Mogli to Neil’s house. Avni and Mogli arrive at Neil’s engagement, while Prakash makes prayers that Neil unites with Avni and Mogli. His prayers get answered when he finds Mogli home. Prakash asks Mogli to be with Neil on his big day. Avni finds hard and tries to make a leave. Neil receives a big shock when he finds Mogli hurt. Mogli falls down the stairs when he was running to Neil. Avni cares for Mogli while he addresses her as his mother. Neil and his family learn that Mogli is Avni’s son. They realize Mogli belongs to their family. Neil gets shattered knowing the truth that his son was living an orphan’s life just because of Avni’s self-taken decision. Neil decides to file a custody case to get his son back.